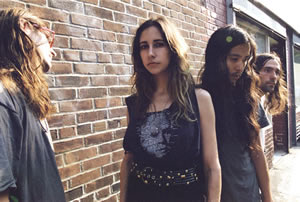 Psychic Ills joined the Social Registry roster in 2006 with the release of their debut, Dins

. In the two years since, the experimental foursome has guested or collaborated on a number of other projects, and they have returned to Social Registry in 2008 with Mirror Eye

. Largely improvised, but never sloppy or misguided, their long and sometimes disturbing pieces are hypnotic and transcendent, blending a driving rock aesthetic with unnameable textures.

Where was Mirror Eye recorded? Do you do any of the recording at home, or do you sequester yourselves in a studio?

Tres Warren: Mirror Eye was recorded in a studio in Brooklyn that we had used before. We record a lot of jams in our practice space and will probably start doing more home recordings again... We used to do things more that way, it feels more free...

How much of what ended up on the album was improvised? Do you have certain structures or parts in mind before you start recording?

Elizabeth Hart: At least 2 of the songs were entirely improvised in the studio, as well as parts of others. And some songs that are 'finished' before we go into the studio are never actually set in stone because when recording you become more scrutinizing, or conversely more imaginative, in a different environment.

Do you come up with narratives for your songs that you all work within while you play?

Elizabeth: Lately, in terms of writing bass parts, I have established a couple of rules that I intend to follow, with the intention of maintaining a unity and variation simultaneously amongst the songs. My inspiration for this comes from a few visual artists whose works' completion is arrived at through various guidelines they have enforced upon themselves, rule-based art.

Many of the sounds in your music give the impression of coming from foreign instruments. Are you using any exotic instruments, or is that the sound of you manipulating traditional western ones?

Tres: I've recorded some stuff on a guitar with a sitar bridge that we are finishing up mixing, but mostly, as far as the guitar is concerned, it's a combination of the effects and notes or scales that make it sound that way. We've always used a lot of 'non-western' percussion and from time to time use other instruments as well--there is a processed tambura loop on the last song.

Jimy SeiTang: Sometimes I try to take electronic sounds and create a sound that is reminiscent of an old instrument of the 14th century.

A lot of the created sounds are reminiscent of sounds from our environment: propellers, drills, flies. Do you ever intentionally set out to re-create a particular sound with synths?

Tres: When I'm working with my synth or sampler, or creating loops or patterns, sometimes it has an intention beforehand and sometimes the role of the sound reveals itself later. I've never tried to make those sounds, but maybe I'll give it a shot.

Jimy: When I'm creating sounds on the synth, I'm trying to create textures that have a familiar feeling in this world. In some sort of way, where the sound isn't a car or a bird, per se, but it reminds me of those things.

is really trance-inducing, it's ominous and makes me think of a shaman communicating with spirits. Is there a particular place you're trying to take the listener on this album?

Tres: No place in particular, but spirit communication is alright by me. I think music is just half of things anyway. Whatever someone has going on in their life is the other. People go places because they're already heading that way, or because they give themselves over to be taken somewhere. If our music does that, that's cool, but I wouldn't say that it's designed only for that reason.

Brian Tamborello: The emotional journey of the band is a given, whether there's any intention in it or not. And it's definitely not limited to the recording process; it begins before we start writing/jamming and I'm not sure when it ends. I think all four of us like the idea of making music that can carry someone else through a sort of emotional landscape, but, as Tres mentioned, all the intention in the world couldn't lay out the particulars of each listener's journey.

What is the role of voice in your music? There are brief samples of echoing speech in a number of the songs, but it's never used in the traditional sense...

Tres: The only sample of a voice is on the last song. It's a man saying: "Go to the radio." The rest is me singing--sometimes in a more traditional way, sometimes not so much. It's usually highly effected, I guess I like things sounding that way... Elizabeth sings at the end of "Fingernail Tea," too.

Do you consider your recordings to be the epitome of your songs, or are they a starting point, from which the live show develops?

Brian: It's different for each song. Some songs want to be scrutinized and tightened up, while others seem to be better when we just let them fall out of our hands. Often times the songs change considerably after they've been recorded. There are also times when I feel like the epitome of a song is lost after the first time we improvise it at rehearsal. But I suppose that's largely because it's the first time I ever heard it.

Jimy: Yeah, I agree with Brian on that. Sometimes when we improvise on the spot, the jam can feel and sound red hot, and then every time we try to recreate that jam, we're trying to get that feel back.

I really like the song title "Fingernail Tea"--can you talk about what this refers to?

Elizabeth: Well, when we were recording Mirror Eye, I cut my fingernails into the leftover tea that I had been drinking and offered fingernail tea to the others. There were no takers on the tea, but we decided it was an appropriate song title.

What music do you listen to in the tour van/bus?

Tres: A lot of Techno and cosmic Free Jazz and sometimes the Steve Miller Band.

Brian: We spend a lot of time trying to escape the Red Hot Chili Peppers on the radio.