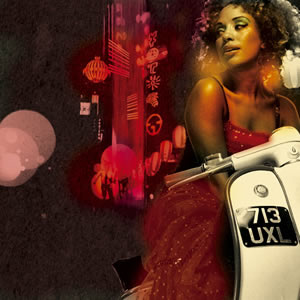 Martina Topley-Bird has been an important vocal presence since first gracing Tricky's debut album, Maxinquaye, in 1995 and several of his albums that followed. Her first solo album, Quixotic, was released in 2003 and was immediately lauded and nominated for the Mercury Prize in the UK, though it wasn't made available in the USA until the following year, with a new title and track order. The solo collection of songs revealed unique melodies, slinky rhythms, and poignant lyrics, which served as fine atmosphere for Topley-Bird's decadently rich voice. Her second album, Blue God, has been produced by Danger Mouse and will be released this year on Independiente Records. The first single ("Carnies") is already out and suggests an album of even more rewarding pop and dance songs than her previous efforts.

I love really dense lyrics and lots of imagery and symbolism like with Joanna Newsom and Tom Waits. I think they're only a distraction if they're bad! For me, it depends what the starting point is. If I start with a melodic idea that seems to want an opaque lyric, they aren't my favourite kind of lyrics, but if that's what the song wants and it feels right, then that's what it should be.

Well, everywhere and nowhere really. You have to be receptive to it, that's all. I'm really into South Korean film at the moment. That's where the most inspiring art is coming from for me.

This time 'round it's a pretty literal translation of the record, 'cos I love it the way it is and it's relatively easy to replicate live. Last time I wanted to change things I wasn't happy with on the record, and some songs really fell apart if the string section wasn't represented so we did have to come up with adequate solutions. I mean, I hate string pads so that wasn't going to happen, so we had the string section committed to vinyl and played it in like that.

What music did you grow up listening to? Do you feel that your sound now incorporates the music of your upbringing or denounces it?

I suppose in England when I was a kid they used to play songs from the '60s on the radio. I remember hearing the Beatles and Frankie Valli so that's what I associate my first memories with, and there is that [influence] in this record... Kate Bush, too. And then Prince. I pretty much denounced my parents' R&B and anything that was lifestyle-orientated or aspirational for what my supposed demographic was.

Not really, no, just the experience of singing.

I don't know... Finishing anything always feels like a huge accomplishment to me! "Phoenix" was wordless for a long time, we tried a couple of different things that we didn't think did the track justice. Then when I locked into it and it was done that felt amazing, such a relief and a triumph and a catalyst for finishing the rest of the songs.

I was exposed to lots of different kinds of music and culture living in London, and my parents traveled a lot and loved bringing stuff back from their travels. I suppose it's made me open to non-mainstream music.

Both. You have to do the fully realized songs, then you put the songs together in a grouping and sequence that makes sense or tell the story you want in the way you want, like scenes in a movie.