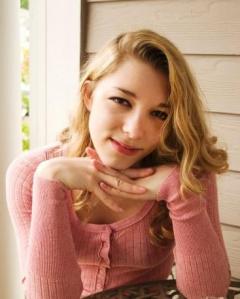 Sarah Crossland likes to write poems about dead people, holiness, roller coasters, and love. The recipient of the 2012 Boston Review Poetry Prize, she was invited to read at the Library of Congress in the spring of 2011, and her manuscript God Factory was a finalist in the 2012 Milkweed Editions Lindquist and Vennum Prize. In her spare time, she plays the harp and teaches at Oakhill Correctional Institute. Someday she hopes to keep bees.

What can people anticipate from your first book of poetry? Are there certain themes or structures that reoccur?

I’m not entirely sure which book will end up being The First One. I have one manuscript out at contests now, God Factory, and another that I’m wrapping up for my MFA thesis at the University of Wisconsin-Madison, which is called Tomorrowland. Plus two in the proverbial stew—Brioullardeuse and 62 Short Films on Creation.

God Factory is a diptych of two longer poems, both of which investigate the idea that classic cinema created a pantheon of icons for everyday worship. The first poem in the book is a series of epistolary poems written by a contemporary Adam (of the Garden of Eden fame) to actress Grace Kelly, and the second is an abecedarian lyric explosion of the life of Sarah Bernhardt (which concerns themes like lying, spectacle, excess, and of course, God). Tomorrowland, on the other hand, is your standard 21 Singles book. There are some sci-fi poems, persona poems, poems about roller coasters and World’s Fairs and disaster and the sublime, love poems, childhood poems, poems that could be dreams—it’s a whole spice rack of themes, really. But, you know, there’s some follow-through metaphor in there about “when things get all blended together”…

The remaining two—62 Short Films on Creation and Brioullardeuse—both involve film, the divine, and ecstasy. The former is a series of miniature Surrealist screenplays (for which I got my inspiration from Tom Andrews), and the latter is a contemporary, hybrid-genre, feminist retelling of the MGM musical Brigadoon, which I hope will someday have actual music to go with it. So, it seems I have a lot of projects. I think it helps, though, to orchestrate it so they’re all at different stages at any given time. I used to write novels when I was younger, and it would just be an abyss when I finished—I’d have to start from scratch again. This way, I’m always thinking about the next thing while I’m polishing the latest thing. It helps a lot with that metaphysical terror.

Thinking of T.S. Eliot famous quip, “Anxiety is the handmaiden of creativity,” what aspects of writing your first book of poems make you feel most anxious and/or most creative?

What I find to be most anxiety-inducing is actually the concept of the book itself! I mean, the front and back covers that close it off, that say: this is the start, and this is the end. It’s hard for me to work that way—thinking of my writing as having these distinguishable bookends throughout time. In finishing up Tomorrowland, for instance, I worry that I have a dozen more World’s Fair poems in me. Then where do they go? I kind of want to write towards everything all going in one big pile—to go straight to the Collected Works. Even the longer projects that could be books in themselves. I know that’s not the way publishing works these days, particularly if I want to get a job, but I’m just hypersensitive to all of the interconnectedness among my poems. Charles Wright said something like, “A poet has only six poems to write.” Meaning that we write what we’re obsessed with. Maybe I’ll suddenly become obsessed with something else as I get older, but so far I’ve basically had the same exact interests since I was four. But I also find that totally empowering—it definitely feeds the creative behemoth. Once you get over that fact—these six poems—you can start digging into specific image and reimagining context.

What advice would you give to students who are just starting to write and publish poetry?

I cross stitch, so whenever I think of writing advice, I think of what I’d consider cross stitching into a decorative pillow (you know—like “Home Sweet Home” or “Live Love Laugh”—which are not my personal maxims, mind you). One of my high school writing teachers, Eric Hoefler, always told us “Pages in, pages out!” You read a lot, you’ll be able to write a lot. I think this is true for capturing inspiration, yes, but also in battling that dumb old saying, “Write what you know.” I hate that. Because you can begin to know about almost anything only by reading about it. Sure, you can’t know what Sarah Bernhardt was thinking when she leaped from the set parapet and injured her knee so badly she decided on amputation—but in reading about historical context, coupled with biography and autobiography, you can begin to take—ah—the leap. (Pun irresistible.)

I also tell my writing students to go big or go home. Yes, specific, sensory detail is important. Yes, realistic dialogue is great. But it needs to matter. You need to be taking risks. You need to be surprised, you need to be uncomfortable. I have a quote up on my wall from novelist Monica Wood that says, “If you’re going to jump, jump off a cliff, not a chair.” I currently work on the magazine Devil’s Lake, and we always try to publish pieces we deem “necessary.” If your writing’s not necessary, then why is it here? Why should anyone read it or begin to care?

Sylvia Plath is reputed to have said she loved rejection slips because they showed her she tried. How do you make art or sense out of the rejection involved in writing?

Sometimes I like to think of rejection as an initiation, a sort of hazing. Minus the velvet cloaks, kidnapping, and riddles (which is a shame, right?—I’d love to be kidnapped by McSweeney’s to, for instance, wind up blindfolded in an orange grove with a sestina written out on my arm, suddenly burdened with the task of figuring out what it all means). I don’t know if it ever really gets better, though—if the hazing actually ends. When I was at UVa, there was a legend going around that Greg Orr covered the walls of one of his bathrooms with all his rejection slips. So maybe you can get to the point where there’s a feng shui to it.

But, right now, I love rejection slips about as much as I love cleaning the onion bits out of the food trap in my kitchen sink. It’s no fun, but you have to keep doing it—and then once it’s over you have a clean drain again. Throughout the years I’ve heard a lot of token phrases about what failure is supposed to mean to writers. The one that I’ve always been drawn to most claims that writing is about trying to achieve lesser and lesser degrees of failure. I think John Casteen said that when he visited one of my undergrad workshops. But language is always (about) failure, isn’t it? In that Buddhist/linguist sort of way—a poem about a dog is not the dog himself. It’s that whole Hassian “a word is elegy to what it signifies.” When I make my poem-things, they’re always fractures because they can’t be the whole world. They can be miniatures, they can be mandalas centered in the self—or an imagined self—but they can’t be the whole universe because language doesn’t let us. Even with Whitmanesque cataloguing, even with thematic obsession, there’s still a sense that what has been done is artifice—not the thing itself, but a representation. Which, though beautiful, is still ultimately, in some way, failure.

What Peaches and What Penumbras, the anthology you edited of witty writerly grocery lists, takes its title from Ginsberg’s “The Supermarket in California.” Within this poem, he takes an imaginary walk with Walt Whitman. What poet would you most like to walk with and is there anything in particular you would like to chat about among “the brilliant stacks of cans?”

I’ll be totally honest here. I’d love to make out with John Keats in the wine and beer section of Trader Joe’s. Obviously, there would be very little talking. I think we’d have a good time.

As you look toward the future, are there any specific goals or aspirations you hope to attain in regards to writing?

In the very-soon-future (like this weekend), I’m hoping to start writing a narrative sequence poem about this breathtaking image that was up on themetapicture.com earlier this week—it’s a series of nice-ish dresses, all illuminated, hanging from a tree. It’s very Southern, lots of color saturation, and I want it to be inhabited with voices. And with this project, I’m thinking about utilizing Pinterest (gasp!) as a vehicle for organizing the inspirational images I want to cluster and converse together. Would Elizabeth Barrett Browning have done that? Well, maybe. Probably not. But I don’t really care. I think technology is only moderately evil, but so is vodka. And where would poets be without vodka? I think we all actually do need our sins.