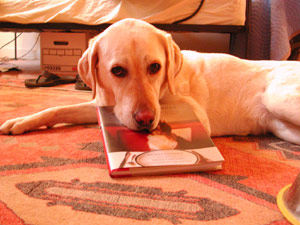 Rosie is not reading this book. But she is helping out. Read on.

Recently I went to some Homo sapiens events with Rosie, my steadfast canine companion. They weren't billed as dog-friendly events, but such is my arrogance (or confidence) that I thought nothing of making Rosie my date. It helped, of course, that I am a board member of the host of one event and a client and friendly acquaintance of the owner of the other. It also helps that Rose is, well, Rosie. We socialized a short time because to quote Sandra Cisneros, all rooms filled with more that couple of human beings start to resemble having one's head in a box of bees. Anyway, I lost count of how many people came up to us and wanted to have some contact with Rosie— alternately fawning over her, appropriately commending her beauty and inquiring about intimate details of her life (her age). For myself, besides regularly being reminded what a chick magnet she is (an observation I find idiotic as anything other than a locker-room remark), I see Rosie as an infallible test (if there could be such a thing) of (others’) personal character. This is something I have come to value more than aesthetic indicators, such as the quality of shoes or the color palette and drape of someone's wardrobe.

As can be expected in the broad spectrum of humans who appreciate, like and admire the canine species, there are manifold manifestations of human/canine love. There are people who immediately begin the baby-talk thing and are unabashed in exchanging or receiving bodily fluids. I think you know the type. Others will repeat how beautiful she is and hang back with a kind of brittle and constipated look. And yet others will come up to me on the street and ask to pet Rosie or offer her a dog treat. The treat offering is the only one to which she has a consistent response -- inhalation of the surprise offering -- but that only insures her continued and ardent attention to her new benefactor's gift hand and pocket. She, of course, pays no attention to the new stranger in her life. Interestingly, to me, is that otherwise Rosie will respond unpredictably to reverential human behavior—occasionally enthusiastically, other times she is nonplussed, and infrequently she will express some, uh, bitchiness. From this unscientific approach I conclude there is something else—perhaps subsonic—that Rosie keys in on, some invisible-to-my-human-senses cue.

Having said all this, I expect that it is understandable that we will (Rosie and I) eschew the conceit that one finds in some dog-oriented books (Barbara Bush's Millie's Book and Mike Malysko's and Judith Hughes' two Betty and Rita books) including the one under consideration, Throw Me A Bone, that attributes authorship to well-known New Yorker writer Susan Orlean's Welsh Springer Spaniel, Copper Gillespie, and is also evidenced in a NYT article echoing that conceit.

I am quite clear that English is not Rosie's natural language and that her deficit in the opposable-thumb area makes her perusal or interest of any book problematic (other than as a potential snack). What, then, suggests Rosie as my collaborator in considering this book? As one learns in the above-cited Alex Wichtel piece, there are 65 million pet dogs in this country, and at least a third of their owners say that they consider the animal to be a child or family member. So while I don't look at Rosie as my child, I do think of her as a family member, and I try to teach that concept to Cuba. That entails a fair amount of empathy and thinking about her needs and behavior, and it is one of the useful attributes of Throw Me a Bone that it intersperses text and recipes with photos and quotations and aphorisms such as the one that comes to mind here (by Edward Hoagland), "In order to really enjoy a dog, one doesn't train him [or her] to be merely semi-human. The point of it is to open oneself to the possibility of becoming partly a dog."

Such is my own mindset regarding the understandable but perhaps misguided anthropomorphism that takes place around dogs. And by the way, I am still mystified about the elevation of William Wegman's Weimerheimer portraiture as art. Mostly I am interested in the ways that dogs have adapted to cohabiting with us humans and the ways humans display canine and other higher mammalian behavior. This has been Rosie's great gift to me— which has been to sensitize me to other mammalian modalities of survival. One thing though is very clear to me — in thousands of years of domestication, the Labrador has lost any ability to discern beneficial foods or to make dining a relaxed and recreational thing. Rosie's relentless foraging and importuning looks at proximate food sources make books like Throw Me a Bone superfluous in responding to her proletarian, mustard-and-ketchup taste buds.

And yet for the food-fixated dog guardian this book is in turns, amusing, as in presenting Mark Twain's incisive observation that, "If you pick up a starving dog and make him prosperous, he will not bite you. That is the principle difference between man and dog." And useful with an array of veteran cookbook author Sally Sampson's "healthy canine taste tested recipes for snacks meals and treats." And also whimsical with Cami Johnson's dog portraiture found throughout.

I want to think some more about this. Since Rosie is a constant companion in my trips to the city, it is hard to escape noticing human behavior towards dogs…after my back stops aching and spasming. I expect there will be more to come…