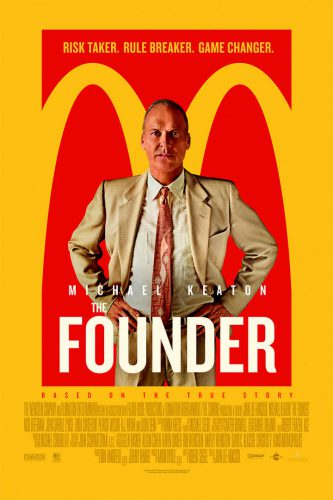 Ray Kroc, ersatz McDonald’s founder and subject of John Lee Hancock’s (The Rookie, Saving Mr. Banks) latest, can tell you a lot about the power of persistence. He started the famous fast food mega-chain from scratch, serving a quality product with breakneck efficiency from his roadside hamburger joint on Lee Street in Des Plaines, Illinois. His model caught on in franchise locations along America’s motorways and the rest, as they say, is history. He built this monolith of a business despite coming up against a bevy of non-believers and narrow minds at every turn, doggedly pursuing his dream of providing delicious convenience to the American family. Cue the plaintive acoustic guitar and slide-show of happy diners in black-and-white.

Another thing about Ray Kroc is that he is a pathological, invasive, ruthless, petty man who connived and lied his way through to becoming the titan of industry that he is. Even his basic sketch of the company’s history is false, and his words about persistence aren’t his own either.

The Founder puts Ray's story squarely in his hands, a decision that has an interesting kind of logic given that it’s not really his to tell. His is an origin story comprised from a patchwork of consistent dissatisfaction with the state of his world, the innovations (and, of course, last name) of Dick and Mac McDonald (Nick Offerman and John Carroll Lynch, respectively), and predatory business practices that help him stake his claim over what would become a definitive American brand.

In order to express this singular vision, the film leans heavily on the singular charms of Michael Keaton (as is to be expected, he’s up for the challenge). This framing of the story around Ray also begets the usual lopsidedness of a “great man” approach to history, and feels at times like the quirky-but-sterilized company storytelling of an ad pitch or employee orientation video. Despite its overall deference, the film musters some cynicism and even offers a bit of satirical bite. Somewhere near its core, underneath the corporate-friendly narrative and the neon-tinged nostalgia, The Founder is a nightmare to the tune of the American Dream.

The film signals that something is amiss in its little slice of Americana through uncanny elements reminiscent of a carnival. It’s driven by a topsy-turvy identity crisis that calls into question systems of ownership, community-building, and cooperation between audience and protagonist. An inventor-turned-milkshake machine salesman whose ever-changing schemes are a consistent source of skepticism for his creditors and angst for his wife (Laura Dern), Ray Kroc becomes consumed by a monomaniacal desire to franchise the McDonald brothers’ restaurant and highly efficient service model. Ray’s quaint straight-talk and wide-eyed pontification (his meditation on the relationship between crosses, American flags, and the McDonald’s golden arches would give any rhetorician a run for their money) gives way to bitter cruelty and shrewd manipulation. He becomes increasingly possessive of the McDonald’s brand, much to the chagrin of the actual McDonalds. The audience is presented with a protagonist who is neither clearly admirable nor irreconcilably villainous, and instead is left to sift through what could be called, in safe terms, a “complicated legacy.”

As with P.T. Barnum, that other American captain of industrious manipulation, Ray’s schemes are captivating at times, revolting at others. This blurring of boundaries also makes it difficult to pin down who exactly Ray Kroc is, which seems to be part of a concerted effort by Ray himself to keep his constituents guessing. Occasional Dutch angles and dizzying overhead tilts help to support this vision of history as carnival. As does the consistent use of mirrors, including a clever bit of book-ending the opening and closing scenes. It begs mentioning that this deployment of circus tactics is appropriate for a film about a company whose other iconic asset is a clown (though the film resists even winking acknowledgement of Ronald).

Unfortunately The Founder does suffer from a bit of softening sentimentality, pulling back on the jabs as if to retcon a fair portrayal of Ray Kroc. The peppy music is a bit out of sync, given that it follows Ray even as he callously dismantles the business built by the hapless McDonald brothers. The call-outs to working-class American families (Ray trades in the country club for the VFW hall as his chosen recreational space, and eases his mind at a hectic interval by taking in a screening of On the Waterfront) are equally contradictory to Ray’s actual business practices (not to mention that part of the brothers’ coveted “Speedee system” of food service involves cutbacks on the restaurant workforce). Ray’s frailty is somewhat on display, as he drinks pretty heavily and shows signs of remorse at times, but his weakness mostly registers as an attempt at humanizing a fairly apathetic man.

Hancock’s preceding film, Saving Mr. Banks, also followed a domineering pillar of American ingenuity in his persistent attempts to capitalize on a resistant party’s intellectual property (and employed the services of two inventive, comical brothers to boot) in the story of Walt Disney’s relentless pitches to P.L. Travers for the film rights to her Mary Poppins books. Hancock seems to be the go-to talent for couching the uncomfortable side of American self-determination in bright tones and warm personas. To his credit, Hancock does allow a little of the story’s inherent menace to bleed through this time, and I wonder if he’ll make more room for imperfect or unclean readings in his projects going forward.

A lot has already been said about how The Founder anticipates Trump’s presidency. Indeed, it heralds our oncoming Republican era moreover, with the unashamed conflation of religion and business, Dick’s exclamation (played to laughs) that he’s a “card carrying Republican” to establish himself as a straight-and-narrow citizen, and a prescient reference to “Governor Reagan.” These strains of political commentary are no surprise given that the film’s writer, Robert D. Siegel, spent some time as editor-in-chief at The Onion in the early 2000s. The film captures a national mood after a weird year and delivers something distinctly American.

But because of this relevancy, it’s odd that it squanders an opportunity to work in some reflections on the current state of the McDonald’s empire. With the company’s flagging sales grabbing headlines, its status as a prominent target of the Fight for $15 movement, and its relation to consistently high rates of obesity and heart disease in America, the house that Ray Kroc built (or stole) provides fertile ground for an impacting and timely story. The film instead serves up a half-measure in satire, striving to “say something” without really driving any of its points home.

Appropriately, I was left with the same existential dread I feel after eating a Big Mac: queasy, anxious, and unsure of what I was supposed to get out of it. Perhaps this is the goal of the film, to give its audience just enough information for sustenance while making it just uneasy enough for provocation. If so, it is commendable as an exercise in palatable cynicism. The Founder, then, might just be a blunt force reading of current affairs, and one model for commentary at the dawn of a hazardous time for such things. As Dick and Mac sought to streamline and mass produce their art without sacrificing its purity, so too might critical engagement still emerge from the consumer-friendly.

One can only hope that the Ray Krocs of the world don’t always win the day, burying this promise deep into the grease-slicked recesses of the American conscience.