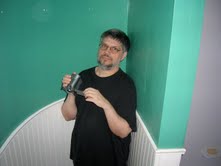 I often think about that kid who I played little league with throughout my baseball career. Every year he sat on the bench waiting to get in for the required two innings and one at bat. I never knew why he kept coming out every year just to sit on the bench. What was his motive? Why didn’t he try something more suitable to his skill sets? Maybe, something like golf or bocce ball. Who knows, he could have been a ringer at throwing those little Italian rubber balls. But, to my surprise, he didn’t even seem to be agitated that he wasn’t playing. On the contrary, he actually looked quite content watching from the bench.

Mike Legge, the writer, director, actor of “My Mouth Lies Screaming,” reminds me of that kid on the bench. He’s on his fourteenth film over the last twenty years with little accolades to speak of. Surprisingly, he still seems to be content to keep making them. Mike explained to me that, “Almost no one likes my films. The people on the internet find it so easy to rip something apart without knowing what goes into it. And, little do they know that it takes just as much work to make a bad film, as it does to make a good one.”

In retrospect, in thinking about that kid on the bench smiling away chomping on his Big League Chew, or Mike Legge and his fourteen films, I guess people need to be a part of, or feel like they are a part of, something. Regardless if it’s only for the two-inning minimum, or making a movie that might not be that well received. At least they did something…and that’s certainly better then doing nothing. So here’s to you, Mike Legge, and that guy who rode the bench all those years. You guys keep going regardless of the status quo. In my eyes, you are my sub-par heroes, my friends.

I caught up with Legge to discuss what drives his underground career.

Roy Koriakian: How did you come up with the idea for the movie?

RK: How do you go about getting actors for no-budget films?

ML: I have a little repertoire to pull from. I run a small theatre company. So, I run into a lot of actors. I end up getting a lot of them coming back for my next movies. How often does an actress get a chance to make out with balloons. We do a lot of strange things in my movies that they would never get to do on another film.

RK: Every movie seems to have a good story to go along with the process of production. What was this film’s story?

ML: I guess the story would be with how we got Phil Hall, a writer at Film Threat who was in this film. I found out that he mentioned me in one of his books about underground movies. He gave me about a page and a half mention in it. He liked my work. No one likes my work. Everyone hates it. Once in a great while I get someone that thinks it’s funny, and really likes it. When I get one of those people I make sure I contact them to thank them. So I called him. Surprisingly, he knew my work well. He was writing a book about distribution at the time. He asked me a few questions about this film. I told him about it. He said, he would love to be in it. I knew he didn’t have much acting experience, but my gut said to do it. I was very pleased with his performance. I guess he was weird enough to be a part of it.

RK: How would you classify the genre of your films?

ML: Years ago, one of the festival runners classified them as no-budget movies. Most of the films in this category are not comedies. Most are vulgar horror films. I’d rather do really, really absurd stuff. In my movies I like to create absurd worlds that aren’t parallel to the real world. In saying that, my fan base is kind of scarce. I get surprised every once in a while. Last year my film, “Dungeon of Dr. Dreck” won at a festival. I won best actor. That was nice.

RK: As a low budget filmmaker how do you go about getting your films out to the public?

I’m terrible at promoting myself. You can find some of my movies on amazon. I used to have distribution. The distribution guy went away. Last three I self-distributed myself. I had to find a way that doesn’t cost me a lot of money. I’m retired now. They just give me royalties. The previous two, I got replicated. It cost me a lot of money and I still have tons of them lying around.

RK: Any new projects in the works?

ML: I’m writing a new screenplay. And surprisingly it’s not a comedy this time. I’m doing a ghost story. Something different for me. It’s not like “Paranormal Activity.” I’m not jumping on that bandwagon. I just wanted to do something different. I’m hoping something good will come out of it. I’m basing it on a real life Paranormalist, and the real events from their experiences.

RL: Anything else you want to discuss?
ML: I’ve been a host on a public access horror show for a long time. And, I’ve been doing it with my girlfriend Lorna Nogueira for the past five years. We show old horror films. There seems to be a resurgence in that kind of thing. It’s a shame, the only place you can find local programming is on public access. I do it every weekend. We’re shown in over a dozen places around the country. There’s a lot of these going on around the country right now. It’s a lot of fun. People should check them out.
* * *
To Mike Legge and to all the filmmakers and bench warmers out there. Keep plugging away my friends. It only takes one well-received film or one home run to jumpstart a whole new beginning. Hell… even Matthew McConaughey has a career.