As I was buying a gallon of milk for $1.99 at the Mobil gas station convenience store, I thought back to the days when George Bush's father was campaigning to keep his sinecure. He was apparently embarrassed by some pesky reporter who had inquired about what the price of milk was —this also might have been about the time that the elder Bush discovered the ubiquitous retailing appliance, the price scanner. This comes to mind because my bad feelings about the younger Bush and his band of triumphalist Babbits has lead me to examine some of the ur-reasons that prop up the political name game currently running amok in my adopted country.

What has finally tipped me over the edge was reading that the Bushists were going to raise a half a million dollars a day each and every day until Election Day 2004. That would be about a quarter of a billion dollars. Needless to say this stinks badly. That alone is a stab in the heart of democracy, but consider that Murdoch's flying monkeys (thank you, Keith Olbermann) will be having an unabated feeding frenzy ripping the entrails out of any opposition to the Bush theocracy.

Much is troubling in public political discourse today, and surely one insidious factor is the use of totalitarian techniques to define and direct that discourse. I knew that an even lower low had been reached when I read that President Bush was now creating a new pariah category, 'revisionist historians'. His use of the notion of revisionist history was so beyond any evidence to date of George Bush having any acquaintance with a world of ideas, that I shudder at what might come next.

I have a sense that there are many people waiting for some sort of (Paddy) Chayefskyian moment, as when in the film Network Howard Beale (Peter Finch) coalesces a powerful submerged national sentiment and makes a mantra out of "I'm mad as hell and I'm not going to take it anymore."

Weapons of Mass Destruction? Tax cuts. High Unemployment. Global warming? The International Criminal Court. Slaughters in Central Africa. Skanky machinations in Venezuela. The Patriot Act. Crony corporations rebuilding Iraq. Continuing the idiocy of a mesozoic Cuba policy. Being mean to Helen Thomas. A glorious taxpayer-funded campaign spot performed live for a narcoleptic press. Insisting on making this a Christian nation—I cannot go on and expect to be productive for the rest of the day.

Okay, so here's the thing. My greatest fear is that a political party that is willing to spend a quarter of a billion dollars to secure the seemingly most powerful office in the known universe (and can easily raise that small fortune) is not doing it to give bread to the poor. More likely we are in for a prolonged season of circus.

I am still mulling over the vaguely fascistic bumper sticker I saw on a late model sedan driven by a white haired couple, "Fear this!" next to an American flag. Am I the only person that sees this as both a flag waved in the face of the US's enemies and a warning to its own citizens?

And finally, I don't see that whatever the ideological bent of my observations (well, the truth is that I would monogram it 'progressive skepticism') their assailability is not a matter of dogma. Maybe. 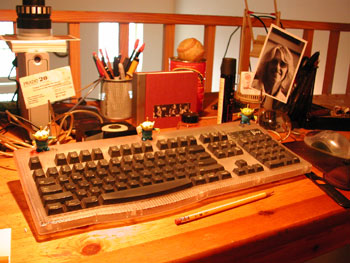