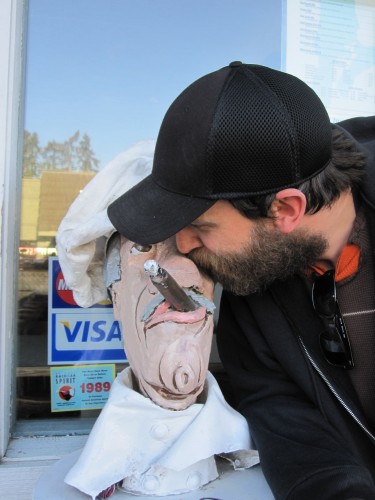 "I like going to a show where everyone is into the music...Everyone's on the same page for whatever, how long, twenty minutes. That feeling's pretty cool."

This interview took place on a bluff overlooking the Puget Sound in the spring of 2011. Mike Dumovich and I had just met at the first Vashon Island Round, where three songwriters are brought together to take turns playing songs and improvising with each other. Having a lot of musical tastes and personality quirks in common, we started playing music together, and I asked if I could interview him while he was writing his third album. We spent one of Seattle's sunniest days sitting on the grass in his backyard, drinking coffee and passing a guitar back and forth.

Unfortunately, one of my hands was taken out by tendinitis a few weeks later, so I wasn't able to transcribe the interview until now. In the meantime, he finished recording his new album, Acres, in a shack on his friend's farm on the island, with a handful of Seattle's best musicians backing him up. His sound is skillful and unpolished at the same time, gritty-sounding instruments and smooth, rich vocals, aggressive guitar solos followed by pretty ballads. Talking to him with the tape recorder running revealed that Mike holds a similar combination of vitriolic and sensitive opinions.

Anna-Lynne Williams: What's the first show that you can remember ever playing?

Mike Dumovich: Oh man. I remember it. I wasn't playing guitar yet, and then I got really into this one record by Mark Lanegan. And Mazzy Star. And I started playing slide guitar, especially after the Mazzy Star record. And there was a young singer out here on Vashon. And a guy that kind of looked like the guitar player from Mazzy Star. So we decided to start a band. But we kind of sucked. But we weren't that bad. We played at the VFW Hall. And I've seen pictures, and it's horrifying what I wore.

AW: (laughs) How old were you?

AW: What did you wear?

MD: It's horrifying. I had...oh boy...OK, I had long johns under camouflage shorts, hiking boots with wool socks, you know...pulled up...kind of that '80s hippie purple color. Like those Nike hiking boots, you know what I'm saying? And a t-shirt and some beads. And a hat that I thought made me look like Perry Farrell from Jane's Addiction -- but it really made me look like I took too much acid at the Oregon Country Fair.

AW: Were you a hippie, or were you a punk rocker?

MD: I didn't know what I was, actually. I was really confused. I had a mullet until I was 18. I was lost.

AW: So you said you weren't playing guitar back then?

AW: And you've been playing music ever since then, or have you ever taken some time off from it?

MD: I took a little miniature time off when I went to Colorado for a summer.

AW: Did you live in the wilderness?

MD: No, I was going to go to school at this place that...sucked. It's called Naropa, and I was really impressed with it because it had this impressive title, called like The Jack Kerouac School of Disembodied Poetics or some shit. And Allen Ginsberg was involved with it, so I was like "Oh man, I'm going there." And I went down there and then I didn't end up going cuz every time I went to talk to any of the kids that were going there they were all just totally rich kid...spoiled...fakers.

AW: (laughs) So how long have you been playing your own Mike Dumovich solo music?

AW: Soon after you started...

MD: Yeah I just started writing my own songs.

AW: But you're not right now?

MD: Oh, you mean like me playing other people's stuff?

AW: Like, have you been in any other bands recently?

MD: I would love to actually do more of that, where I'm not the writer and I'm just playing guitar, because I really like playing electric, too. I don't do that very often -- out. But I love it. It's refreshing. Music can be really fun. And if you write stuff it's really more rewarding, I guess. But it's also painful somehow.

AW: Do you have any period of your songwriting that you don't like to play anymore because it reminds you of anything, or...

MD: Hmm...yeah. And I don't like to play stuff that's too old. I get sick of my own stuff pretty quick.

AW: So when you play a show now, do you pretty much play all new stuff that you're working on?

MD: Is it? I just think it sucks to play songs when you're flat bored on them.

AW: Yeah I like playing a lot of covers at shows, too, just cuz it's like the first time I've ever played them. And obviously with my own songs that could never be the first time...

MD: Yeah. I've done a few covers. I kind of pound covers too much, I think.

AW: You pound them?

MD: Like, if I learn a cover I'll play it too many shows in a row. Cuz I don't learn many. So I'll learn one and I'll really love it...

AW: What are some favorite ones that you cover?

MD: I really love that Bert Jansch one. Well, Anne Briggs wrote it and then Bert Jansch covered it, with his crazy guitar stuff on it...

AW: Ok, yeah. Do you feel when you perform other people's songs live, does it feel as emotional and personal as when you do your own?

MD: Sometimes more. Well that song, when I first heard it, it really emotionally hit me. And then every time I'd play it, I'd get really emotional about it. And it's fun to play. Just the guitar and the way the vocal line...At first it was more the emotional things, it fit what I was feeling at the time. But now it's just really fun to play. It might be the first thing I play if someone says, "Oh, play a song," or something. My fingers get addicted to that feeling of like multi picking strings. 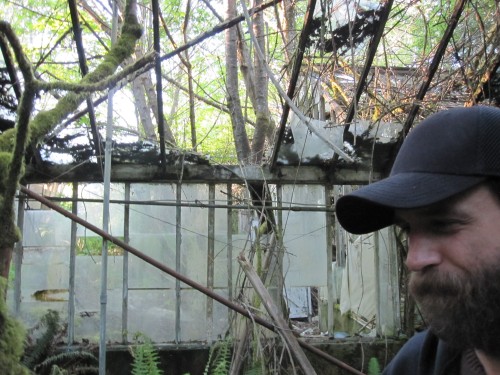 AW: So what sort of things make you want to write? Like, what are some things that generally inspire you or give you ideas?

AW: So are you an autobiographical writer, or do you find yourself sort of thinking like characters or...

MD: I rarely sit down and go, "I'm gonna write a song about yadda yadda." In fact, I'm trying to do one about my grandma who just passed away, and it's fucking brutally hard because I just...I don't usually do that.

AW: You mean having a goal when you set out?

MD: Yeah, just a specific topic. Like I had my dad write down a history about her because I didn't know enough about her. And then I had him send me a bunch of pictures of her. But the words still haven't...There are lines of the song I'm working on that are there. But the rest of them...It's just been really, really hard.

AW: Was she an artist too?

MD: No, she was a badass though. Really, really truly. Cool lady.

AW: Did she make pie?

MD: No. But she did turn me onto peanut-butter-and-mayonnaise sandwiches.

AW: Oh yeah. So I wanted to ask you about what it was like playing a show with your dad recently. Because you were on the same bill...

AW: Have you done that before?

MD: Yeah, we did it two other times.

AW: So what is it like being a musician in kind of an isolated environment? I mean, you're close to Seattle. But living on an island...

MD: Well I've only been out here for like six months this time.

MD: It's good and bad. It's good because I grew up out here. And it's bad because I grew up out here. The isolated part...it's good and bad. I get a lot out of it but...I was just telling someone that Vashon's kind of like, it's either this really green, misty, wonderful, beautiful place. Or it's like literally the Swamp of Despair from The NeverEnding Story, and you can be drawn down into it, and Atreyu is trying to save you...You're like a big horse, you're like sad and sinking...No, no, it's not that bad. But it can be. (laughing)

AW: So what are you working on right now, musically?

MD: I have to get words done for two songs. And after that I'll be two or three songs short of another record. I want to record it in a couple months. I'm gonna record it with Johnny {Goss} from Cock & Swan. Johnny's really knowledgeable. He has an amazing sound that he gets out.

AW: How long have you known that you were a musician, and that you wanted to do this? By the time you played that...show in the shorts? (laughs)

MD: Well, I was originally going to be an actor, out of high school. And I had a potential full ride at Cornish that I was gonna go do. But I didn't like other actors that I met that were theater students. I just didn't like them.

MD: For the most part. Well I mean...just back then. But fake people always bothered me.

AW: Did you study music at any point?

MD: I just taught myself, yeah. You know, you learn some chords. And then you get -- like I was saying -- that addicting thing. You just get into the sound. I remember when I first started playing I would get really stoned and pluck a chord on my acoustic guitar and just listen to it ring out for a long time. And think, wow it's so cool that you can take your hand and do that and this thing would come out of it. But acoustic guitars...I'm starting to lose that energy towards them.

AW: Yeah I've never really had that with acoustic guitars myself. I guess I kind of feel that with weird little small guitars or...I've always felt really drawn to pianos. I guess that kind of finger/muscle memory. Like it's the way it sounds and the way it feels that's also rewarding. Where playing acoustic guitar I've never had that. So what are some things that make you happy?

AW: Some things that you like. What do you love?

AW: In the world.

MD: It's pretty cheesy, you know? I have some really basic things that make me happy. Like when I see people being nice to each other I'm really moved. Or when people are really strong in the face of bad stuff. Or I also like going to a show where everyone is into the music. Playing it or just going to it. Everyone's on the same page for whatever, how long, twenty minutes. That feeling's pretty cool. And I like not being angry.

Interview and photographs by Anna-Lynne Williams

Recommended listening: "Norway" and "Are You Sith" from the new album Acres by Mike Dumovich.