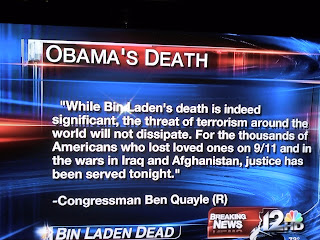 Did you hear the news? Obama -- er, Osama -- was killed last night. (See facepalm above.) Terrorism died with him, of course.

To celebrate mankind's final and complete triumph over evil, we're going to Walt Disney World. Actually, according to Guernica, that might not be the best idea...

Down and Out in the Magic Kingdom: Each year at Disney World, thousands of interns earn academic credit for flipping burgers or parking cars. Ross Perlin details their vague assignments, long hours, and the meaning of the phrase “protein spill.”

Speaking of Walts, did you know Walt Whitman wrote anonymous reviews of his work?

“An American bard at last!” he raved in 1855. “Large, proud, affectionate, eating, drinking and breeding, his costume manly and free, his face sunburnt and bearded.”

Read more about his and other authors' self-promotion throughout history in the NY Times.

(Not to be left out of the act: William Shakespeare.)

But enough about death and military operations -- who here is up for some existential Star Wars?