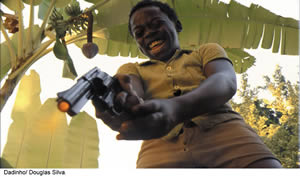 Fernando Meirelles’ City of God crackles and depresses, exhilarates and horrifies. Lauded by critics as a frenetic work of art five years ago, Cidade de Deus marked Meirelles as a cinematic virtuoso. Based on the popular novel by Paulo Lins, this film chronicles the lives of two boys, Rocket and Li’l Zé, as they grow up in a favela and move to a section of Rio de Janeiro, an area in which every kind of human activity disturbs and appalls.

Spanning more than a decade, City Of God

is narrated by the youthful Rocket (Alex Rodrigues), a budding photojournalist who shows promise of moving beyond this heart of darkness when his photographs of Li’l Zé (Leandro Firmino), a gangster with a dark, dark soul, are published in a Rio jornal in the last third of the film. He snaps these photos amid the bloody gang war between Li’l Zé and his charismatic rival, Knockout Ned (Seu Jorge).

In this world, a child’s criminal training begins at a more experienced teenaged gangster’s knee. This apprenticeship starts with stealing, looting, robbing and progresses to extortion, murder and gang warfare. In one horrifying scene, a boy, roughly 10 or so, is told to kill one of two cornered youths (around four and nine years old) of a rival gang. Goaded by Li’l Zé, he executes the older boy in a rite of passage. This scene is preceded by Li’l Zé’s own criminal uprising. As an adolescent, he acts as a lookout for a brothel robbery (a scheme he devised but is not allowed to participate), and, after he tricks his older accomplices into fleeing, enters the hotel and murders the staff and patrons.

These horrors are just two among many, for in this semi-collapsed society, people are constricted by corruption and engulfed by criminality. As one of its major themes, City of God painfully illustrates poverty’s numerous privations: the few choices, the slim chances, the narrow and vicious minds. With plenty of guns and little insight, life among the ruins has never been sadder, never more visceral, never more violent. Here, the origin of poverty lies not so much in diminished resources but with poor social behavior. We follow the lives of some Brazilian youths as they move from one troubled exploit to the next. Though he is often in the thick of a dizzying morass, Rocket manages to avoid too many serious problems. He does, however, benefit from the criminality of his peers. He gets a camera from one of his drug-dealing pals and, later, accepts another from Li’l Zé, the camera he uses to take gang photos that earn him an internship at a newspaper.

The film focuses on Rocket’s developing work ethic. His growth from an adolescent to teenager is contrasted with the easy promises and the dangerous pathos of Rio’s youth gangs. Meirelles matches their energy with his vibrant cinematic techniques—the split screens, fluid cameras and time-lapsed photography—capturing the rush of life in its precarious and capricious moments. This kinetic energy frames the story’s somewhat overlong but fast-paced vignettes. Only occasionally does City of God break from illustrating the fiery, intense work of crime to focus on life’s smaller, quieter moments. But in this world even intimate moments explode.

At the time, critic Peter Rainer, then of New York magazine, complained that Meirelles’ techniques glamorized violence. Rainer’s point is debatable, for Meirelles’ hectic style is not meant to merely excite audiences. The filmmaker's intention is to develop an empathic understanding of these young criminals, because they take pride and seek fame in hurting their enemies. They’re thrilled when they murder. The film illustrates their frame of reference, so we can comprehend how they live, make decisions and target their victims. This empathic approach is meant to make us cringe at the fast-paced world in which these kids live and die. Clearly, Meirelles wants us to see things we are unable--or, more likely, unwilling--to see. He understands that a movie-going audience is a varied group, but he also knows that most people will avert their eyes from a painfully depressing world in which nothing is certain because everything is possible, including kids murdering kids. So Meirelles comes at us with a powerful ferocity, assaulting our defenses to alter our critical perspectives.

Consequently, City of God has an implicit argument--that artists must possess a social conscience. For Meirelles, art must intrude into and open up closed worlds; his is a kind of liberation aesthetics that sheds light on serious social matters. No doubt, Meirelles' pedagogy is based on a strong impulse and conviction that life can persevere even amid the most painful, shocking circumstances. Because most of us cannot immerse ourselves in the favelas, Meirelles wants us to study the film’s most painful features and try to understand the characters’ experiences. For instance, these youths yearn for power in a world in which upward mobility comes from criminal behavior. Because parents are largely absent, adults do not possess the answers as to how these kids will grow, so peer groups substitute for parents, and these groups, for the most part, govern themselves. Meirelles does explicitly investigate how the desire for power affects these kids as part of his broader social psychological quest to understand why young males are preoccupied with violence.

His depiction, though, subverts traditional conventions. Ordinarily, audiences approach fictive narratives by suspending their disbelief. Meirelles, like many postmodern artists, disrupts this willful suspension by drawing explicit attention to his techniques, so his audience can understand how his artistic choices, such as cuts, dissolves, and pans (much credit should go to the talented editor, Daniel Rezende, as well) are as much a part of the narrative as the characters, settings and conflicts. For Meirelles, this focus on style and technique functions as another means of exploring his subject, and if we accept the premise that an artist frames his subject by his directorial choices, then we can accept that a filmmaker uses these choices to make arguments about his subject.

Director Fernando Meirelles asserts that life can persevere even amid the most difficult circumstances.

Though all films play with temporality and spatiality, City of God alters chronology in order to illustrate the cycles of violence. In this sense, Meirelles never lets us forget that, amid the horrors and executions we are witnessing, we are watching a movie. He draws attention to his techniques as a self-conscious means of expressing his artistry. For this reason, City of God strives for realism but also draws attention to its fictive elements by rubbing our noses in the horrific shootings of children within a context of non-linear storytelling and sped-up imagery. A compelling story-within-a-story uses freeze frames and quick fades to illustrate how an apartment changes hands among drug dealers. This recursive style of narration adds more information and different points of view to previous scenes, tying together the past with the present.

With Meirelles, there is a burning desire for expression, and this burning doesn’t allow him to function merely as a detached expositor. He commits to illustrating the relationship between form and content, bringing to our awareness all of film’s constituent parts. However, he is not interested in merely creating a film to catalog his techniques (something Brian De Palma does far too often). Rather, for Meirelles, liberation aesthetics must use every technique and device necessary to penetrate those very worlds in which art has little or no standing. In this sense, the very labor of art is to illuminate life’s landscapes, labyrinths and dead ends. Meirelles, Bráulio Mantovani and Lins place their protagonist in an unwelcoming world alive with deadly horrors, and through Rocket’s eyes, we understand the algorithms of the city, the smells of the slums, and the problems posed by roving, rootless masculine groups.

But for Meirelles, if art must have a social conscience, then art must show a means of escape. This perspective helps explain why Rocket yearns to become a photographer and why he runs to a broader world that offers more choices. Though we sympathize with Rocket, we never quite figure him out. He, like Li’l Zé, lacks depth. Because of his youth, Rocket comments only on what he observes even though City of God illustrates many things that he cannot possibly see or fathom (such as the murder of his brother). At times, his narration is minimalist, even bare, and, as a consequence, Rocket seems to function as a tabula rasa, being inscribed by the environment in which he lives. Not finished growing, not offering too much insight, not a fully developed character, he is our guide through a lethally ironic world in which the police arm the very gangs they are charged to apprehend.

What this film does offer is some perspective into the socialized power of peer groups, but what is thinly explained is why Rocket yearns for something more than fitting into criminal enterprises. What compels him to avoid (as much as he can) the perils of being a hoodlum? At one point, he tells his brother that he disdains physical labor (and being a criminal requires too much work), yet, later on, he seeks his independence by working honest jobs and getting by with a little luck. The film seems content to let the social circumstances explain Li’l Zé’s pathology, but Rocket’s behavior is the reason why he survives. Though we’re never quite sure why he spurns criminality, we just know that he carves a path away from the criminal kinship of his peers. Here, society is corrupt, and the conditions of life are deeply disturbing. Only a yearning for something better is presented as an alternative to crime, and individual responsibility becomes the measure of all conduct. At one point, Rocket rides the bus looking for victims to rob with his brother’s broken pistol, but fortunate circumstances and personal decisions keep him and his friend from going through with their half-hearted plans.

Despite this scene and others that suggest hope for Rocket, there is an overwhelming fatalism for what seem to be incurable social ills. Though Rocket does resist the violence, he is stalked by this nihilism. He holds his moral ground because he is on the run.

Although it never comes to terms with how to deal with youth crime, Meirelles' film argues that art must proceed de realibus ad realiora in its heightened pursuit of the truth. Meirelles also argues that artists must also come to terms with their own creative choices in order to comprehend, command and shape the subject they study, especially if the subject is the power of art itself.

1 thought on “Liberation Aesthetics: Sinning and Surviving in Meirelles’ <em>City of God</em>”