May 1 is May Day, celebrating the observance of spring
and the renewal of life and Labor Day everywhere in the world except
the U.S., Canada and Bermuda.

Once again, workers of the world unite!

May is National Book Month (www.nationalbook.org)
and Get Caught Reading Month (www.getcaughtreading.org).

It has been eight months since I turned my television into a video
monitor and foreswore the temptations of cable hookup. No Sopranos,
no The Wire, no Fox Noise, no World Series, no
Iraq squawk, no presidential press conferences (have there been
any real ones?)…no American Imperium war gibberish…did
I say it's been eight months? Oddly--at least to me, it's not been
a difficult habit to break (I do watch Nickelodeon with my son,
but that's another story.) Interestingly, the most rewarding part
of my rehabilitation has been reading about various goings on in
TV land. The ongoing growth of the Daily Show's Jon Stewart,
the return of Keith Obermann and the haunting of American media
by eminence lite, Tina Brown, are sufficient to fuel my
ambivalence about my nascent TV-free life style.

Jesse Oxfield did
a fine Q & A with Obermann on Mediabistro.com:

Yeah, I have some theories. And that's the premise of the show,
for a large part. Most people under the age of thirty have never
been exposed to what was state-of-the-art hard news. When I was
ten years old, there was a live shot from the moon. This was unbelievable.
The live video camera--the mobile camera that allowed you to go
on the story as it happened--was an innovation and a presentation
that had never been seen before. Interaction between newscasters,
more than one newscaster on a newscast, these were all things that
were invented as I was growing up and were designed to keep people's
attention in an ever more crowded entertainment universe. We haven't
done a thing like that in 20 years in television news. Everybody
keeps bringing out a 1980 newscast. Collectively, we have done very
few new formats and very few new ideas about how to present it.
I think that there are a few new ideas out there, and we are very
encouraged by the initial results of this program which, as I said,
is just at its embryonic stage. We're just letting a few of the
gimmicks peek their heads up, and we're getting all encouraging
signs about the youth of the audience watching this particular hour,
their willingness to stay for the whole thing.

The same sort of approach that worked at Sports Center I think
will work in news. Which is--and I've said this many times before,
and so has Dan Patrick--we did a lot of slapstick, we did a lot
of silliness, we did a lot of bad puns. But those were always there
because the news was either not serious enough or not strong enough
to carry an audience through an hour. We didn't throw the news over
our shoulder just so we could write a great long lead-in to something
that mentioned how many Hootie and the Blowfish golf tournaments
we'd gone to. Yes, you've got to throw various hooks into people
to keep them; you've got to hit all the notes and say OK, we got
the hard news, we have the dumb news, we have the intriguing news,
we have the opinion on the news and we have a series of puns along
the line of "There's been an uprising in Basra, the Shiites
have hit the fan" To get an audience that's used to rapid-fire
entertainment, you've got to give them a good television show for
60 minutes. And you must, at the same time, and this is where I'm
sort of wearing two hats, you have to be absolutely dedicated to
saying, "We could keep the audience and grow it a little bit
more than it even is now, but to do that we have to sell the news
out, and we're not going to do it." And, you have to decide
how much of one and the other. What can you play with? To me, you
can play with the format, you can play with the always-serious tone,
and as long as you can get it back to being completely serious when
it needs to be, you can basically do whatever you want to make it
a good TV show. And that's what we're going to try to do.

As did Bob Sassone at Professor
Barnhardt's journal which served up some side-splitting Obermann:

I recently heard you say on your show, "we report, you
decide." Is that something you have to clear with the higher-ups,
or do they let you have freedom on stuff like that?

No, not at all. All three cable networks have a healthy, vigorous
dislike for each other. I get a round of applause when I do something
like that. And God Bless Rupert Murdoch for one thing: his covey
of flying monkeys do something journalistically atrocious every
hour of the day. They hand us the sword every day and say "smite
us right here." And I'm a good smiter.

I am almost tempted to call my cable guy.

And then there is Jon Stewart, here with Howard Kurtz on his CNN
show (Kurtz for a change is not bad as a straight man):

KURTZ: We're on the verge of a big, momentous historic mid-term
election. How excited are you personally?

STEWART: Well, I think I reflect the feeling in the country,
just tough to sit still, can't wait to get out and vote for whatever
congressman is up there. Yeah, it's been real tough to get anybody
interested in it. Apparently, there's a -- what's it called? --
a war looming.

KURTZ: But if you watch television, you would think the election
had been canceled. So has politics become too boring for the media,
unless it's some juicy sex scandal or something like that?

KURTZ: The other night on "The Daily Show" Senator
John Edwards. Why would a guy who is, you know, clearly planning
to run as president come on and answer your inane questions?

STEWART: I'm a king maker. I'm an idol maker. People come on.
I'm sort of the David Frost of the Comedy Central set.

KURTZ: He did promise to reveal on your program whether he
was going to run for president.

STEWART: He did promise that.

KURTZ: That would be a big scoop for you.

STEWART: But you know what? People have lied to me on my program
before.

Stewart even made it on to Frank Rich's radar screen at the former
Gray
Lady:

What's more, "The Daily Show" has fulfilled its mission
without being particularly ideological. On the day of Baghdad's
liberation, Mr. Stewart told his viewers that "if you are incapable
of feeling at least a tiny amount of joy at watching ordinary Iraqis
celebrate this, you are lost to the ideological left." Then
he added: "If you are incapable of feeling badly that we even
had to use force in the first place, you are ideologically lost
to the right." He implored "both of those groups to leave
the room now."

I was dialing the cable guy's number.

Tina Brown is back--sort of. Well, she never really was allowed
to go away. The Times of London continued to provide the
well-traveled Brown a venue and the regularly remodeled Salon.com
recycled those journalistic marshmallows. I guess that's their version
of balance: Andrew Sullivan's rancid rants as the yin to Ms. Brown's
self-serving soliloquies as the yang. But at least Sullivan's indicate
an approximation of primate ideation. What to say about Tina's natter?
Birds chirping, screeching and clucking comes to mind. And then
there is endless celebrating and attention devoted to this celebrity
madam by various acolytes, careerists and unconscious media watchers.
The most exaggerated and perhaps terminal example is that teenie-Tina
woman at Gawker.com.

But I digressed. Brown's new cable show premiered last night. One
good thing about it is that at least the press on Brown will not
be the empty caloric diets of quoting Brown on what stories she
would assign if she were editing a magazine (Is there someone out
there who has the bad judgment and the fuck you dollars to allow
her to helm a magazine again? The answer, of course, frightens me.)
That's
news, right?

I get ideas all the time for pieces that I would assign. So
that's part of me. I'll never stop doing that. I'll probably do
it in my sleep. Yes, I do miss that. But at the same time, I have
really enjoyed getting back to writing [my column], which was my
first kind of life, and which I did miss tremendously. And I only
stopped writing because I had two kids, and I couldn't have magazines
and kids and write as well. Now my children are just a little bit
older, and of course I don't have the magazine. But I've really
been enjoying the freshness of trying to master something new. It's
been very, very nice to work in a new medium.

Oy vey! But wait. Today's
post mortem had the ebullient and loquacious Tina pronouncing
that:

The worst thing about TV is that the next day everyone from
the guy in the dry cleaners to old school friends you’ve taken
years to shed offers an opinion. The instant intimacy of the box
allows instant candour. I learnt this after I did a guest spot years
ago presenting Film Night for the BBC. I was shopping for bananas
in the fruit shop in Pimlico when the sales assistant opined cheerfully:
“Saw your show last night. Really sucked, didn’t it?”
Whereas it’s unlikely anyone will say this -- though plenty
may think it -- if your piece in The New York Times is
a dog. This makes for a certain brave authenticity in TV people.
They know that failure in their world is the only thing that isn’t
fake. The upside is, memories are short and they get to do it again.

Wow, it's bracing and encouraging that Tina Brown is not too old
to learn. But in a paragraph rife with silliness the non-sequitor
about the New York Times had me gasping for air. So, I
won't be one of the 74,000 people watching in the future…

So okay, I hung up on the cable guy. I wanted to finish Jane Smiley's
new book, Good Faith, anyway. 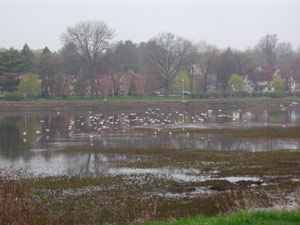 May Day on the Squamscott River by RB