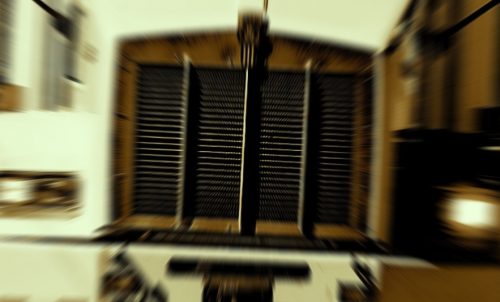 Eastbound on I-30 headed into Little Rock, sixty-five miles an hour at mile marker 130-something, the jointed concrete lanes bouncing me like a damn trampoline, churning up the burritos I ate at my fuel stop in Mount Vernon and the truck-stop coffee I’ve been sipping on since. Left Dallas mid-morning with forty-six thousand pounds of Coffee Mate, just in time to get here for the evening rush hour. Need to take a piss, but it’s gonna wait until I get through town and out of this traffic. If all goes according to plan I’ll make Nashville before I hit the sleeper tonight.

Two skinny lanes, Arkansas-rough and forever under construction, I’m watching the dirty white Xtra trailer in front of me leave the ground as it bounces empty over the patches at every joint, and I’m keeping the corner of my eye on my left-side mirrors, where there’s another big-truck beside my trailer. Them concrete lanes ain’t but eighteen inches wider than our trucks, dropping off into wrist-breaking potholes right at what’s left of the paint lines, so ain’t neither of us got much room to mess around. Last time I risked a real look in that side mirror I saw another set of mirrors poking out chrome and CB antenna behind my trailer, another big truck sitting right in my back doors, crammed in close enough to read the number on Nestle’s little metal door seal.

The CB ain’t nothing but squeaks and squawks, drivers and wannabes and good-buddies and lot-lizards all stepping all over each other to get a word in edgewise, so I done gained it way down where it’s just my next-door neighbors coming through, and tuned in the drive-time news on KUAR, All Things Considered talking about some shit going on somewhere in Africa, people starving over politics while food rots in storehouses, people making misery for other folks just to be hateful. Turned up loud enough so I can hear it over the 80-hertz hum of my 12-liter diesel Cat, over the whistle of my turbocharger, the squeak of my air-sprung seat, the pornographic thump under my sleeper at every joint in the road, the rattle of my load locks stowed on the back of the sleeper, my wind-up alarm clock clanking around on the shelf behind my back, my utility belt on its hook slapping against the sleeper wall, the rush of the wind in the wing-vent I keep popped open to blow out the cigarette smoke.

A girl in a dusty old Chevy Citation crosses out the olive-drab landscape, off the frontage road (there’s always a frontage road in these parts) onto the sudden entrance ramp, and dives into the truck-length of following distance I’ve carved out behind that bouncy white trailer. I slip my foot down off of my throttle and listen to the jakes kick in with a growl, but it’s all talk; 12 liters of backed-up engine compression ain’t gonna do much braking against 79,850 pounds of big truck with 65 mph worth of momentum behind it—the same momentum that little four-wheeler would have at around mach 2. I’m looking down in her back window at the top of a baby seat that may or may not be occupied, so I tip my sock foot over to the brake pedal and feather in a few pounds of air with the idea of easing back for a little room to fuck up. She’s craning her head around, looking at my Freightliner grill in her rear-view mirror and scowling up at me in her side mirror like she’s pissed off at me for tailgating her, when it ain’t been ten seconds ago she jumped in where there weren’t room. We come to the overpass, two ten-foot lanes and no shoulders, just chewed-up curbs, with that big truck to my left and that other one in my back door, when she decides by god she’s going to make me back off—and stabs her goddamn brakes. I see her little tin-can Citation pitch forward, one brake light lit up, and I slam my foot all the way down on my brakes.

If you ain’t never done it, here’s what happens when you panic-stomp the brakes on a fully loaded big truck. The spring-loaded air valve opens all the way up, and 110 p.s.i. of air pressure gets distributed out from the air tanks to the six brakes on the tractor, and through the glad-hand connectors and the pigtail lines out to the four brakes on the trailer, doing all it can do against the rubber diaphragms in the rig’s ten brake chambers, which push about a ton of force through each of the ten sets of slack adjusters to turn the ten brake cams, which, in turn, lever the rig’s twenty semi-metallic brake shoes outward against the ten turning steel brake drums. It takes almost an entire second for the brakes to engage. The friction of the fully-engaged brakes heats the drums to blistering within a couple of seconds, and that boils acrid gasses out of the brake shoes to turn the noses of the folks behind, but with the leverage of four tons per brake drum, and the friction of over two tons per tire on the pavement, it’s still stronger than all that braking friction, and even though I’m braking with all my might—and watching the back window of that fragile little car disappear into the blind spot in front of my hood—don’t none of my eighteen tires slide on the pavement. I grip the steering wheel on both sides, thumbs unhooked so I don’t break ‘em when I hit her, because I ain’t got no other option. There’s a big truck to my left with nowhere to go, a big truck right in my back doors for extra impact, the banged-up bridge rail a few inches from my right wheels, and over that, the fall onto the backed-up traffic underneath—a fall that would kill me and who knows how many workday commuters. I ain’t got no choice but to let all that Coffee Mate keep pushing me right into that little Citation, into the baby seat that I don’t know ain’t occupied, into that idiot little razorback standing on her brake pedal despite all the goddamn laws of physics.

I can’t see the front bumper of my Freightliner, ‘cuz our trucks ain’t got that mirror, but you spend much time moving a truck this size around tight spaces you get a feel for where its corners are, and I can tell you for goddamn certain that I come within three foot of the back of that flimsy-ass little Citation before that little girl wises up and lets off her brake.

Heart in my throat, head spinning, screaming incoherent obscenities at the windshield, I yank at the high-beam switch and ape-hang my left hand on the air-horn cable, but the cheap little standard-equipment air horn, clogged with bugs and road dirt like always, whines out a mama’s-boy complaint instead of the hypermasculine blast you always hear in the movies.

Over my fussy horn and the trained babble of newscaster voices comes a down-home baritone, this one echoing through my gained-down CB.

“TRL, what’s with the goddamn brakes!”

I let go of the horn cable, reach up and grab the mic swinging around on its blue and yellow mini-bungee, and I try my damnedest to sound calm and nonchalant on the radio.

She jumps off at the next exit ramp and as she’s slowing down she sticks her spindly white arm out of her window and flies a middle finger at me.

I turn my attention back to that empty white trailer bouncing along in front of me, knowing this was just another close call, just another four-wheeler that doesn’t get it, knowing the distance between me and that trailer is just enough room to end up with some new idiot jumping in there, overconfident and reckless, comfortable in the delusion that my rig can stop anywhere close to as quickly as their four-wheeler. I put the pedal to the metal and my turbo spools up as I pour on the fuel, trying to close up that gap just enough to keep it clear. I’m moving on with my day, moving on with this freight, but that ain’t really what I want to do.

What I really want to do is chase her down. What I really want to do is drag her through her window, slam her against the side of her own car and scream in her face, veins and spittle and everything. I want my hardwood tire thumper in my hand so I can leave dents in the roof of her car right beside her head. I want to break off her mirrors and bash in her windshield and her headlights. I want her to know just exactly how close I came to killing her, just exactly how close I came to either killing the kid in that car seat or leaving that kid an orphan. She obviously has no fucking idea how goddamn close I just came to rolling her ass up in that little piece-of-shit beer can she’s driving, and I want her to know. I want her to feel it. I want her to feel the fear I felt when I just knew I was going to crush her to death in her own little car on a beat-up overpass outside of Little Rock. The fear that is still coursing through my veins and flooding my system with cortisol, the fear that is settling cold and rancid with that truck-stop burrito and that acidic black coffee churning in the pit of my stomach.