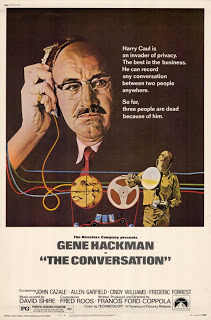 Francis Ford Coppola’s The Conversation opened to critical ambivalence in 1974, with Vincent Canby and John Simon dismissing the film while Stanley Kauffmann and Pauline Kael reserved more praise for Coppola than the film itself. In the time since, the film has enjoyed a revived critical life, for many critics have contextualized this film as a Watergate-era thriller in which a surveillance expert’s pathology is seen as emblematic of a deeply troubled Nixonian ethos. This historicism is helpful in creating a critical context for interpreting some of the film’s themes, but this context falls short of developing useful commentary on Harry Caul (Gene Hackman), the protagonist originally characterized (and often re-characterized) as paranoid and veering towards madness.

Canby, in particular, describes Caul as giving “every indication of being a psychotic,” and this condition “lessens the impact of the story." Further, he states that “psychotics make unreliable heroes [because] no rules need apply to them.” Canby’s interpretation is worth challenging because his (mis)characterization of Caul has enabled some revivalists to carry this assertion in their frames. And despite the earnestness of this revivalism, critics have missed some thematic points that are worth exploring to further illustrate the worthiness of Coppola’s still-undervalued character study.

The recontextualizing of The Conversation has taken on a few distinct but interrelated forms. Critics have embraced the film for its prophetic political themes while also linking the protagonist to the well-known details of Nixon's pathology. For instance, Benjamin Strong’s re-reading draws on this relation by arguing that the protagonist is a “paranoiac” who scuttles his home looking for a bug that is “actually there” (a dubious claim, given we don’t ever discover if such a device is actually there). Dennis Turner’s “The Subject of the Conversation” composes a lengthy interpretive analysis of the film’s intertextual and interstitial relationships with other film narratives while managing to provide brief psychological insight. Roger Ebert, in his sympathetic yet underdeveloped analysis, states simply that Caul is “bad at his job” and is an “unhappy . . . lonely man.” Still others have focused on the theme of “detachment” to claim that Caul is “at the point of madness" at the film's conclusion. Focusing on the motif of detachment is understandable, but detachment doesn’t seem as important as Caul’s engaged willingness to confront the real threats made against his life and the lives of others. And “madness”?

Caul seems to suffer from an obsessive-compulsion disorder (or more likely, OCPD) that compels him to safeguard his personal space, and this disorder disfigures his relations with people. Because he distrusts others (for fear of being hurt or because he might hurt them), the film focuses on illustrating the extent and intensity of his compulsions as a basis for its character study. Caul’s disorder plays out in many scenes, particularly his compulsion for locks and barriers as well as his semi-preoccupation with religious practices. But when Caul lays out his remuneration on a table in his corporate client’s office and lines it up in neat rows, he fails to count it before he is asked to leave. This scene (among many others) reveals quite a bit about his maladaptive perfectionism. But, more importantly, his obsessions for privacy and safety also manifest in a dream that illustrates his desire to help a woman (Cindy Williams), but this scene ultimately reveals how distant he is from the truth. On these matters, Coppola is very clear about the dissociative context of Caul’s characterization: he is functionally ill.

The characterization that Caul is merely a weird paranoid or a “mad” man is worth challenging in order to establish an alternative reading. In the hands of critics, the term paranoiahas been used promiscuously and conveniently to frame Caul as a delusional man spiraling toward a deeper kind of psychopathology. What the film makes clear is that Caul’s instincts for danger are working properly because, at every plot turn, his fears regarding his privacy and his safety are warranted. However, his instincts for deciphering the sources of danger are not always valid. Why? Caul is unable to address his fears in a functional way because of his preoccupation with orderliness and his demand for perfection. Because he creates barriers and uses locks to help organize and protect his work, apartment, life, critics have suggested that these actions are the work of a paranoid man, but, from the film’s perspective, though Caul is deeply troubled by his fears, paranoia (an unwarranted concern) doesn’t seem to be one of his problems.

Caul’s compulsion to safeguard his personal space is presented as a pre-existing condition. Early on, an unseen landlord defeats Caul’s security system by placing a birthday gift in his apartment. This gesture unsettles and angers Caul. Certainly, a birthday gift seems harmless, but one of the film’s more important motifs is that rather innocuous objects (a pen, phone, etc.) are the very instruments used to violate people’s privacy. The film further reveals that Caul's spheres are routinely penetrated and violated by outsiders (his mail is tampered with, too), andbecause of these circumstances, his fears seem warranted. For these reasons, paranoia doesn’t incite his obsessions. Rather, it is his experiences that excite his concerns.

Caul is hired to record and photograph a couple (Williams and Fredric Forrest) as they walk and converse in San Francisco’s Union Square. Afterward, as he compounds his audio-visual evidence to present to his client in one master tape, he begins to understand that something more is going on than two discreet (or indiscreet) lovers talking in a busy park, and, as he studies the conversation, he begins to believe the couple is the target of the woman’s powerful husband (Robert Duvall). As Caul interprets and evaluates what he is hearing, one key theme emerges: the film argues that interpretive acts are moral in nature--and that objects (particularly language) cannot be investigated by technical procedure alone. Caul's difficulty lies in trying to understand the rhetorical complexities of interpreting and evaluating a context in which truth and fallacy coalesce to form a mixed message (“He’d kill us, if he got the chance”), but he begins to understand the shape and scope of the conspiracy when he shifts to an empirical investigation.

Though the film isn’t clear about the origins of his disorder, we’re given information that Caul was involved in the death of innocent people. His guilt pains his conscience and influences his thoughts and actions. With the Union Square plot, something is afoot, and there is evidence of foul play in the making. As Caul gathers more evidence, his instincts to protect himself lessen as his desire to protect the couple grows.

Interestingly, the film engages in many arguments, but the film illustrates that boundaries are less delineated and more fluid than one perceives--especially moral boundaries. For Coppola, moving over perceived thresholds is a matter of personal choice, so Caul’s moral agency grows as he becomes more concerned for the couple and more confident in his interpretation of what he hears and sees. Though Coppola gives us many scenes that speak to Caul’s isolative tendencies as well as his compulsion to create spatial and temporal boundaries, once Caul discovers the dangers surrounding the couple, he risks his safety and moves across these thresholds to help them. In this sense, Caul’s moral engagement (rather than his detachment) becomes central to the narrative.

The film carefully points out that Caul’s agency stems from his personal convictions. We observe Caul meticulously composing his master tape by replaying the conversation again and again (and again). We witness how he obsessively pieces together and replays the conversation in his conscious and unconscious states. These scenes correspondingly demonstrate Caul’s perfectionism and his personality disorder. Though much has been written about his banality and weirdness, about his transparent jacket, his solo saxophone playing, and trysts, Caul pushes himself to overcome the pull of his self-imposed barriers to help the couple.

In her non-review of The Conversation, Pauline Kael claims that Caul “is a cipher--a cipher in torment. There’s nothing to discover about him, and still he’s in terror of being bugged.” True, Caul is worried about being victimized (symptomatic of his obsessions), but Kael’s rather odd reading misses plot details about his troubled past as well as his technological inventions--that he has both personal and trade knowledge worth concealing--particularly in a business in which gamesmanship, spying and exploitation are the norms. Here, however, Coppola’s point is clear: Caul’s self-torment is caused by his experiences rather than his delusions, an important point critics have not developed in their work.

The Conversation builds a psychological profile that allows us to understand the important aspects of Caul’s OCPD, but, more importantly, the film portrays Caul’s moral agency as authentic, and his interpretation and evaluation of these events real. Without a doubt, he misreads the intent of the couple’s conversation, but it is his experience--not his derangement--which directs his interpretive act, and it is his empathy for the perceived victims which veers him into misunderstanding the meaning of the aforementioned key statement.

In the Blu-Ray DVD, Coppola does reference Caul’s “paranoia,” signifying the writer-director’s authorial intent. Certainly, writers and directors interpret and evaluate their work; however, audiences are also responsible for its own interpretive acts. In this sense, the film argues that Caul’s sickness and moral agency develop because of his experiences--that there are bona fide reasons and deeply held convictions that explain his beliefs and actions, but such experiences take a heavy, psychological toll, particularly when Caul’s moral concerns are repeatedly questioned, circumvented, attacked.

In the final act, when Caul receives a threatening phone call from a conspirator (Harrison Ford), he rips apart his home looking for a surveillance device. Some critics have interpreted his actions as indicative of his disintegration or his descent into madness, but what is important is that Caul’s moral agency seems intact. Because the murderous conspirators have penetrated his private space (they know his phone number, where he lives, etc.), Caul instinctively acts to test and discover their means. Clearly, Caul’s demand for perfectionism doesn’t tolerate any kind of uncertainty, and because his epistemic obsession compels him to know and understand, he destroys his apartment looking for a bug.

Though Caul is clearly in crisis, he appears to be morally alert and self-aware. Not insane. The film emphasizes the importance of connecting experience and rationality, but the film argues that one moral agent is little match for an organized group which, at every turn, has the upper hand. Coppola centers this moral dispute among rival traditions--of relating individual agency to group ones. Though many critics have interpreted the ending as Coppola's declaration of Caul’s madness, one could reasonably claim that--in this allegory (as Kauffmann calls this film)--the individual has the ability to grasp, realize and act upon the truth outside of group formations--that though such moral agents are not fully capable of defending the truth against the collectivism of groups, such individuals cannot be vanquished.