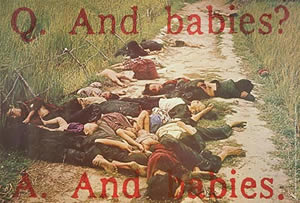 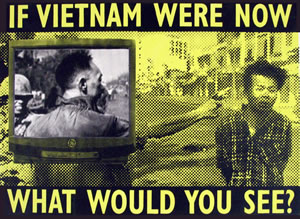 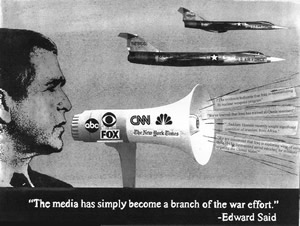 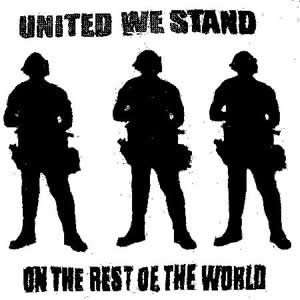 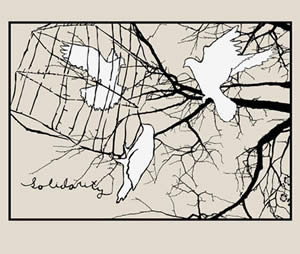 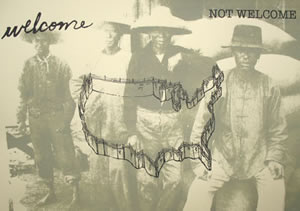 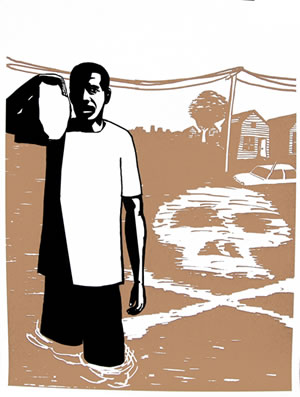 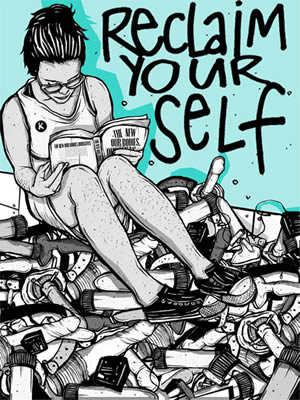 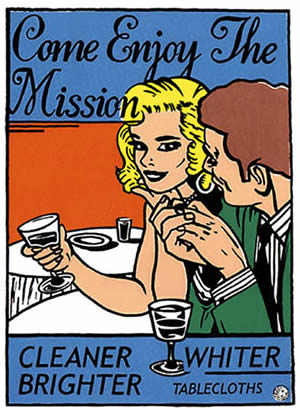 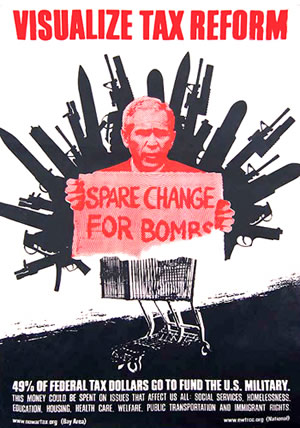 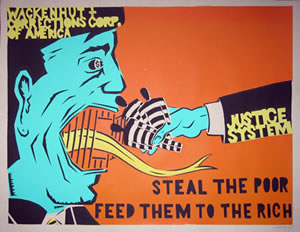 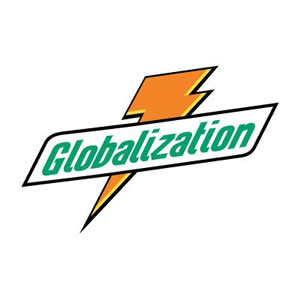 Favianna Rodriguez and Josh MacPhee don’t want you to curl up on your sofa and quietly flip through their new compendium of political graphics, Reproduce & Revolt (Soft Skull Press, 2008)--they want you to tear out the pages, scan images, distribute their guide for designing political graphics to everyone you know, use any image you want in the book to create flyers, graffiti, bumper stickers and more. They want you to do just what the title demands.

Reproduce & Revolt highlights how artists worldwide are responding to the critical issues of our time. Featuring the works of artists from more than a dozen countries, the book is an offering to activist artists and organizations alike, complete with a primer that explains how to utilize images to improve the effectiveness of campaigns. What’s more, all of the images of “copyleft,” meaning you can copy them over and over again.

Rodriguez and MacPhee, both social artists themselves, were inspired to create the book out of an urge to update the library of images upon which activists draw. Rodriguez has created vibrant illustrations against the war in Iraq and Afghanistan as well as works to support immigrant and women’s rights, affirmative action and youth activism. MacPhee, a member of the political art collective Justseeds.org, focuses his work around the themes of radical politics, privatization and public space.

Both took the time to speak with Alexandra Tursi about their new book and social art then and now.

Alexandra Tursi: What inspired you to create Reproduce & Revolt, and how did you come together to create it?

Favianna Rodriguez: There was an artist’s call in circulation, and I thought it was really important for a woman of color to be involved and to make it reach multilingual communities. I reached out to Josh, who I know from other political activist work, and suggested collaboration and he was open to it. At the time, the artist’s call was translated and shared among parts of Mexico and Latin America. I noticed that when the translation happened there was an exponential increase in the visibility of the project and circulation online, especially among non-English-speaking communities.

Josh MacPhee: Inspiration came from the feeling that there was a desperate need for something like this. The majority of graphics that have been circulating in left circles--flyers and posters and things--were images that had been recycled from the 70s and 80s and were continually being reused. Some of them are amazing and great graphics, but the times have changed and the issues we’re dealing with have evolved. A new injection of visual ideas is necessary for activists, artists and designers to directly use to create. If we’re able to share a little bit of our knowledge of basic design and experience with graphics so more people have access to it, then hopefully we can help improve people’s ability to reach out to one another.

AT: What do you consider the key part of social art?

JM: Ultimately, what makes all art effective is its ability to communicate. I think for social art the key is effectively communicating about the social issue being addressed. So it’s about people receiving the information in a way that gives them insight or understanding into what it is you’re communicating.

FR: I think the key part of social art that it’s not so much profit-driven, but driven by getting people active, inspired and mobilized. The intention and objective is very different from selling a product. There is no manipulation of the user/viewer, but rather education of the viewer/user.

Because we’re in the context in which our messages are not visible enough, because you’re dealing with communities that are oppressed, or issues that are being misrepresented, we have to talk about those issues in a different context than most of mass media does. There are a lot of political decisions made about how to represent an issue and what message to focus on. There are decisions around education and exposure and concerns about depicting people so that it’s responsible, accurate and relevant.

AT: What are the images that stand the test of time? What themes occur again and again?

FR: The issues of labor and labor rights keep coming up, the rights of workers to organize and to fight for equal pay and health care--sadly, it’s one that keeps coming up. Another is women’s issues, and we’re also now dealing with LGBT issues. The other timeless images are around resistance--the fist, the rally, the people marching with signs.

AT: What are some of the newer, contemporary issues we are seeing social artists creating images about?

FR: One of the major issues is the growth and power of multinational corporations and their role in everything from destroying the environment to privatizing prisons to controlling the media to funding the war in Iraq. That’s a major new issue I see intersecting all areas of social art.

We also see a greater consciousness around what we eat and the food activism movement – the fight for clean food, the push to eat locally. It’s interesting, because in the past food activism was very much centered on farm workers; the frame wasn’t around eating local, it was more around labor rights.

What’s apparent is that there is a huge intersection of issues. As an activist in the 21st century you can no longer be in your activist silo. I’m dealing with immigrants, labor, race, the world economy, WPO, IMF, WTO, free trade, and sweatshops.

AT: What are the biggest changes we’ve seen in social art over the last 30 years?

JM: I think that the biggest change in the '70s and '80s was technology-driven. With the placement of the photocopy machine in every office, school and library, basically anyone who had access to a copy machine had access to his own printing press. In the late '70s and '80s, you had an explosion of black and white political graphics because tens of thousands of more people had access to being able to freely or inexpensively reproduce their ideas. Now we have the Internet, which has taken that to another level.

We now have access to technology that allows us to easily and inexpensively distribute images around the world. What that has led to is people taking and evolving images and ideas nearly instantaneously. An artist in Buenos Aires will create a stencil against the war and put it up on the street – within twenty-four hours a photo of that is put up on the Internet and someone in Europe pulls it down and makes her own version of it and prints it on a flyer and sends it to a friend in another country and she takes it out and does something else with it. People are making the graphics just like they were a hundred years ago, but now they have the tools to shoot them halfway across the world in an instant.

AT: What criteria did you use to select the images for this book?

FR: It was really important that we had a fair representation of diversity in the book. We were looking for artwork that not only showed a diversity of issues, but a diversity of language. We wanted to have artists from different countries so that it wasn’t American-centered. The decision was not only on great art but on also doing something that, politically, was a diverse representation of the activist world.

JM: Usefulness was the key component. Could we envision someone picking up the book, putting that image on a copy machine and then using it to campaign? There was really good art by some fairly well known artists that we didn’t include because we didn’t think people would use it. There is really great art that doesn’t really translate as a political graphic; it speaks on other levels. There is a lot of stuff in here that is very effective as a political graphic, but would not be considered “great art” by most people. We tried to think about usefulness and communication--what would speak to broad activist and organizer audiences so that there would be something for everyone to be able to use.

AT: In the book, you mention that large corporations have the luxury of money to spread their messages through myriad means, billboards to cell phones and beyond. How can the images and messages contained in this book move beyond paper? What do you hope people do with this book?

JM: In all likelihood, in the immediate future we won’t have access to the same budget and resources. We hope by taking and collecting these images and putting them into the public domain in a form that is accessible to people, and we’re currently working on getting a website up where these images and more will be available for people to download, we create another access point. The more people use them, the more visual material that we can put out that is intelligent and speaks to the issues and provides an alternative to the way those issues are presented in the mainstream media. We see this as one brick in a large building that needs to be built.

The book and the website serve as a toolkit for people to access this whole community of artists and also play a role in convincing organizations, community and activist groups that the way they present themselves--cultural and visual presentation--is very important. It’s not just artists on their own trying to combat the media landscape, you need a whole network of organizations thinking about the visual realm of the work that they do. This is just as important as the other parts of the work that they do. I think that this can help confront the dominant and mainstream visual landscape.

AT: In the book, you say that we live “in a world increasingly obsessed with private property and intellectual property rights.” How does the type of art you’re demanding combat this?

JM: There’s a debate raging about intellectual property, and I think it’s going to become a much louder debate among people who consider themselves artists. I feel that creativity is a collective process and that in art, just like any field, innovation happens over periods of time in which there are lots of people adding bits and pieces to the generation of ideas. What’s happened is that there is a threat to that kind of collective idea generation by the profit motive. The status quo demands that anytime anyone comes up with something they think is slightly nifty, they immediately privatize it so that nobody else can use it.

I know that the things I produce are the product of the interactions with anyone I’ve ever communicated with and everything that I’ve ever seen. There needs to be a greater acknowledgement of that. The best ideas and the most effective things usually come from our interactions with each other, it’s the way innovation happens, how ideas rapidly and quickly grow. We want that to happen in the visual realm.

One thing that distinguishes political graphics from traditional fine art is a long history of recycling ideas. You see hundreds of posters that use master artwork as a visual reference point to get people to key into an idea. It’s an extremely vital, driving and lively visual conversation. We think that this book will help to protect and propel that and encourage more people to participate in that.