Jai Chakrabarti is the author of the novel A Play for the End of the World (Knopf, 2021) and the forthcoming story collection A Small Sacrifice for an Enormous Happiness (Knopf, 2023).

A Play for the End of the World won the National Jewish Book Award for debut fiction and was longlisted for the 2022 PEN/Faulkner award.

In the Washington Post review of Jai’s novel, Anita Felicelli compared the book to Jhumpa Lahiri’s The Lowland and wrote: “A Play for the End of the World meditates on conundrums of agency that, unfortunately, are still relevant to artists and writers. Can art truly matter in a time of intense upheaval and turmoil over the failures and force of a government?”

Born in Kolkata, India, Jai Chakrabarti has a background in computer and data science and has also been an Emerging Writer Fellow at A Public Space. His fiction has appeared in The O. Henry Prize Stories, The Best American Short Stories, and many literary journals. His nonfiction can be found in The Wall Street Journal, Writer’s Digest, Fast Company, and other places. (Read his LitHub advice on how to get unstuck while writing.) He lives in New York.

Matt Borondy: Given your background in software engineering and data science, do you consider yourself to be a data-driven writer?

Jai Chakrabarti: I spent time this morning researching the origins of the term data. In English you see the first occurrences in the 17th century, but it exists in Latin and even before that it comes from proto Indo-European. The verb dadami in Sanskrit which means “to give” ends up in Latin as datum in noun form as “the thing given,” for instance the thing given to settle a debt. But the word morphs away from this idea of transference of a thing to simply a collection of things. Then it’s reclaimed in the field of computer science in 1946 as information that can be transmitted. Nowadays the distinction between “qualitative” and “quantitative” data is important; as a data scientist you’re interested in both the facts that you collect from the world as well as the hard numbers, so to speak.

The other evening I was at a friend’s house and in that twilight hour I watched as a deer jumped her fence, and my friend without missing a beat chased the deer with the clanging of two pans, implements she seemed to hang onto just for that purpose. I catalogued deer, which in that dusky light made me think: wolf. The concentration on my friend’s face. The deer’s body, its limbs knowing how to jump back into the safety of the fields. I could see these were all data, but before a version of this scene eventually made its way into a short story I’m working on they were processed through me, changed not only in the particulars but in the emotional registers. I was less interested in conveying the fact of the deer jumping the fence and being chased back out; more, my interiority as I experienced this. What did I feel watching the deer in the field at twilight, and what did that have to do in that moment with being human?

MB: What points of data would you consider to be the origin of your novel? Were you processing an experience at the time that led you to this story?

JC: For a computer, time isn’t important. What I mean is that computational units are broken down into discrete “cycles” which only track to our notion of human time in incidental ways: to solve a problem, a computer needs a certain number of cycles which happens to correspond to a number of seconds, minutes, hours, or even years in our canonical notion of time. The computer doesn’t care how busy we are, when our next birthday is - it simply exists to do its work and whatever time has elapsed has elapsed.

I raise this because the idea for my novel came to me while living in Jerusalem, a place that I sometimes feel has its own notion of time. The confluence of ancient cultures living so closely together atop layers of human history impacted how I walked to the shukh for ripe strawberries. I always felt an acceleration of ideas, juxtapositions, anxieties, as if the crucible were becoming more crucible-like each day. My writing fractured, the sentences shorter, more to the point.

Then on our last day in the city we visited Yad Vashem, the Holocaust Museum, which is a place I consider to be outside this time, and perhaps that is the point of a memorial to genocide, to millions dead, entire communities lost. I did not imagine then that art could bloom in such a place/time, but that was what I’d find: an exhibit about the Polish-Jewish educator Janusz Korzak who decided to stage a play by Rabindranath Tagore weeks from deportations to Treblinka.

Processing that experience took me years, and writing a novel helped me understand: what it meant for art to be invoked and then performed in the darkest of our times.

MB: I was thrilled to see your book receive the Goldberg Prize for Debut Fiction from the Jewish Book Council. What did that honor mean to you? How do you define success as a writer?

JC: The National Jewish Book Award is an incredible honor, and one of the great pleasures of this publishing process has been meeting with communities through the Jewish Book Council, learning about how people remain connected to the story of Janusz Korczak and the Warsaw Ghetto.

When I got the news about the award, I was heading back from a reading and was in a taxi en-route to the airport. Naomi Firestone-Teeter from the Jewish Book Council was explaining over the phone that I’d won the award, and a car swerved in front of ours as we nearly crashed on the highway. I think I’ll always remember the juxtaposition of the pure joy of getting the news and the harrowing near-death circumstance in which it was received. I suppose the work of being a writer is a series of such juxtapositions: both small and large joys and ideas that bloom and die to make space for others.

For me, success as a writer is being able to shape something that feels emotionally true and then being able to share that with at least one person for whom it resonates and maybe even helps to illuminate in some small way their own story in the world.

MB: Regarding the cycle of blooming and dying, getting a feel for when a work is truly finished seems to be one of the most difficult skills for a writer to master. We talked about the origins of this story and how it came into your mind, but how did you know you were finished with this novel?

JC: The poet Naomi Shihab Nye wrote in “How Do I Know When a Poem is Finished?”:

I think you could keep doing this
forever. But the blue chair looks best
with the red pillow. So you might as well
leave it that way.

She’s talking about this experience of brightening a room by moving objects around, which could go on forever, but at some point you realize the blue chair and the red pillow are excellent matches for each other, which is to say at some point you enter the cave of diminishing returns. But diminishing returns for who and for what? Since I believe writing to be about connection then at some stage the shifting of commas, sentences, whole chapters no longer sparks that same level of joy, that feeling of discovery, in me as a writer which if I trod on the reader will also feel. And then I know it’s time to let go. 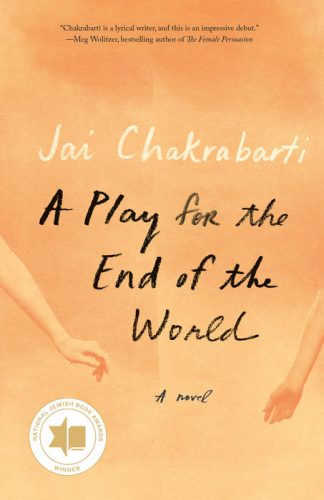 MB: Once the book was finished and put out into the world, how did the response align with your expectations? Beyond receiving the National Jewish Book Award and being longlisted for the PEN/Faulkner award, what highlights stand out from your interactions with readers?

JC: I’m grateful for the public recognition and even more so for the many moments of connection with readers. I’ve particularly enjoyed meeting readers who have a personal link to the historical subject matter of the book. One reader shared a Yiddish songbook from Poland in the 1930s that her parents had kept, which included a translation of a Rabindranth Tagore song. Another reader shared how her mother had witnessed Janusz Korczak’s march to the so-called “embarkation point” to Treblinka. So many readers have shared their own connections to this story, which in turn has deepened my understanding and appreciation for the people and places the novel explores.

MB: You have a new story collection called A Small Sacrifice for an Enormous Happiness coming out in February. Presumably, this title is derived from your A Public Space fellowship story with the same title. What does that title say about the new book as a whole?

JC: The title comes from a line of dialogue in the story where Nikhil is trying to convince his lover to have a child with him. Given their circumstances, it’s an audacious and ill-advised request that will eventually bring disastrous consequences. For me, that moment captures much of human folly: we might be trying to convince a lover to make a “small sacrifice” when, in fact, it’s not small at all and when the happiness it might bring is questionable at best. Throughout the stories in the collection, I wanted to play with that sense of irony, as the characters stumble ahead, arriving if not at happiness than at least some sense of self-reflection.

MB: I read on your Medium page that you delved deeply into poetry in your twenties and published poems in several journals. But the recent bios I've seen for you describe you as strictly a fiction writer. Do you still write poems?

JC: I’m impressed by your research! I did indeed write and publish poems in my twenties. While I still read poems and sometimes come to poetry to get “unstuck” in my fiction, I rarely still write my own. I’m not sure why, other than I think I’ve found fiction to be consuming and fulfilling.