I was reading one of those snarky (here's a word that
has been riding a linguistic wave) on the new literary magazine
The Believer:

So is The Believer worth your $8? I can't see it, really. The
New Yorker, the NYRB, The Atlantic, even, I daresay, Salon –
all these places have more interesting stuff.

Setting aside (on good faith) the presumptuous question of what
is worth my money, I was reminded of the credit card campaign that
lists the prices of a number of items and then comes up with the
punch line, "Your child's smile: Priceless." The insidious
message here since you can buy your child's happiness that is, of
course, worth all the junk you have just purchased. Such is the
wondrous alchemy of material consumption and the nefarious casuistry
of modern hucksters.

In that spirit I pondered the notion of value. Is a good book worth
$24.95? And a fair book, uh, $18.95? How much "interesting
stuff" has to be in a magazine to justify its cover price?
The silly possible responses are infinite. Let me refrain from litanizing.
I subscribe to the New Yorker. Though I rarely fail to
find at least one thing of notable personal value, I would not be
flinging the magazine into the garbage because at any given time
I did not find something "interesting."

The only notion of value that makes sense to me (I dimly recall
that there are psychoanalytic theses equating money with feces)
is one of equivalence based on my meager and limited revenues. I
tend to think in terms of dog food and my son's shoes and his day
camp (or a new, 20GB Ipod). Or even more to the point, can I afford
this or that?

But then that is just me. I am sure a case can be made that a Richard
Avedon photograph is not worth twenty thousand dollars or a Van
Gogh sixty million dollars. But how much are they worth? Not as
much as the map of the world my son just made, I think. 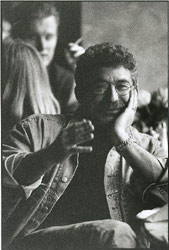