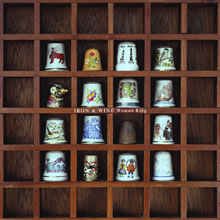 “No hands are half as firm or gentle as they’d like to be.” -Sam Beam

From the beginnings of his career, Sam Beam seemed to exist somewhere near the forefront of the new folk movement. People like Devendra Banhart, Joanna Newsom and Will Oldham were surfacing in the wake of his success, either as new names or as older, underappreciated artists in their long-awaited uprising.

With his first album, The Creek Drank the Cradle

, he started out intentionally. He presented himself in lo-fidelity, wrote songs reminiscent of a folk aesthetic and downplayed his vocals like a true indie artist. Since then, his sound has moved away from the obscure and has inched closer to the modern singer-songwriter world: The sonic quality of his albums has become incrementally more polished, his songs have developed more palatable melodies and his lyrics seem to include more references to a certain unfashionable deity whose name I will not mention.

Generally, any one of these descriptions would be reason enough for me to fling a disc from a speeding vehicle; but with Iron and Wine’s newest album, I would be missing out on something important.

The album is the perfect next step in the career of a folk artist living in the current music climate. For one thing, it is a definitive step. It is not a rehashing of the old bag of folk tricks. It is proof that Sam Beam can nurture and feed some of the elements of his last album, Our Endless Numbered Days

, without repeating himself and without losing his distinct sound. This is a fine line. It is the same line that causes most artists to trip and collapse into irrelevance. It is what pushes intelligent musicians to explore the depth of their sound and what reveals other musicians to be fleeting products of their time and place. In this particular case, Beam has shown himself to be an attentive, authentic songwriter. He has contributed another list of crafted songs to his already impressive oeuvre.

On Woman King, the tunes step closer to the sound of traditional blues while the recording quality steps further away. The fidelity is almost too clean and warm for the intimate, porch-side style of music. It is the inappropriate effect of Robert Johnson in a modern day studio. Beam’s guitar playing also tends to fall more regularly into blues-riffs, acoustic tap-alongs and driving rhythms, rather than the sweet finger-picking style that was the previous Iron and Wine staple. The vocals have shifted only slightly. He maintains simpler, higher ranges and as a result replaces some of his classic, subdued qualities with a larger range of emotion and a higher level of intensity (a relative word).

He is almost always accompanied by vocalist (and sibling) Sarah Beam, who—although present on previous albums—contributes the kind of backup vocals that almost make the work an album of duets. This is both good and bad. In some ways, it is this very element that leads the music away from the independent folk genre and into that smooth, contemporary blues/singer-songwriter terrain we sometimes call a “guilty pleasure.” But it also adds a certain Peter, Paul and Mary quality to the melodies, which would otherwise be stark and gospel-like.

The EP also introduces entirely new elements to the Iron and Wine sound. Sparse percussion becomes almost as integral to the music as his characteristic guitar melodies. It is everywhere on the album. It drives the music. It gels the six songs together and creates a relatively cohesive sound out of the disc, a characteristic almost more important on EPs than full lengths, which are generally too long to sustain a single sonic quality.

Most importantly, Woman King preserves the integrity Sam Beam has developed on previous albums. Despite the substantial shifting of his sound, there is no passage that corrupts the hypnotic mood or abandons the well-loved Iron and Wine personality. At all moments, even the less focused ones, the music feels intelligent, calm and honest, like a story from a wise grandfather.