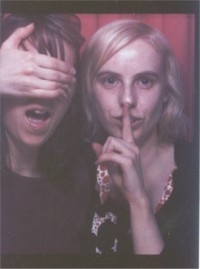 You might know Erin Bealmear from her poetry, which has appeared in journals such as Exquisite Corpse, 3am Magazine, and this here website. You might also know her from her personal home page, Take Off Your Veil. Or maybe you know her because she's that girl you've been stalking since the eighth grade. But the main reason you should know Erin Bealmear is that she's a winner. In our recent fundraising raffle, Erin won 12th place, which was good enough to be granted an interview in our prestigious, incomparable publication. A stunning accomplishment indeed.

In the below interview, Erin shares her winning strategies and talks about her lack of belief in karma, her extensive fortune cookie collection, and why online dating sites can't nail down her personality.

What's the coolest thing you've ever won, aside from this interview?

This is the coolest thing I’ve ever won . . . really. Sometimes I win free movie passes to advance screenings. That’s pretty cool, too.

Do you believe in karma?

I would like to believe in Karma because I think it’s important for human beings to treat everything in the world with decency and respect, but in order to believe in Karma you have to accept the notion that only bad things happen to bad people. That simply isn’t true. I don’t think that 99.9% of the people who died on September 11th deserved to die that way. I don’t know if anyone deserves that. I can’t look at all the atrocities in the world and believe in Karma or God. It just doesn’t make sense to me. Although, I must say, “Instant Karma” is one of my favorite songs.

Britney Spears, Radiohead, and Seven Mary Three have all released songs called "Lucky" in the past decade or so. Which of those "Lucky" songs inspires you the most to get lucky?

Actually, I think I’ll go with "Luck Be a Lady" instead. You know, because it’s fun and ballsy and you can dance to it. Besides, it’s always sung by some overconfident person like Frank Sinatra or Marlon Brando, so you can’t help but feel more self-assured after listening to it.

Have you ever played the lotto numbers on the back of a fortune cookie?

No, but I always keep the fortunes. Once, I received a fortune that read “Don’t walk down dark streets alone.” Uhhhh . . . okay.

On the rare occasions that you lose at something, how do you typically respond? (Is typing or shouting the phrase "OMG RIGGED!!!" ever involved?)

Yeah, that’s pretty much what happens. Every time I buy a lottery ticket, which isn’t very often, I’m always quite positive that I’m going to win and then I die a little bit inside when I don’t. I definitely have a false sense of my own luckiness.

Your website says you took the eharmony online dating quiz and failed miserably at finding a match. Are you that lame, or is online dating rigged?

I’m definitely lame, but I don’t think that has anything to do with the fact that I failed the test. I just think those sites cater to a certain type of person, of which I am not. Actually, I kind of consider it a badge of honor that a computer couldn’t nail down my personality. I guess that’s what I have to tell myself, anyway, or I’d just wind up laying in my closet, listening to Travis, and staring at the ceiling for hours. Not that I’ve ever done that before.

If you could produce a commercial for an online dating site, what would it involve, and which celebrity would you use as a spokesperson?

I think I would use Elizabeth Taylor as my spokesperson and it would go something like this:

Hi. I’m Elizabeth Taylor. You may know me from my movies, National Velvet, Cat on a Hot Tin Roof, and Cleopatra, or from my many failed marriages to men such as Richard Burton, Eddie Fisher, and Nicky Hilton. Yes, it’s true. I have been married eight times. That’s right. Eight friggin’ times. Each time I thought I was marrying my soul mate and each time he turned out to be a real dud. (Okay, maybe not that guy who died, but I probably would have divorced him eventually.) Let me tell you a little secret: there is no such thing as a perfect match or a soul mate. Frankly, you’d probably be happier if you remained single, but if you insist of having someone around that will only lie to you, cheat on you, and steal your money, then call this number.

Your website also says you want to marry me. That means you're probably both crazy and desperate, but it's not like I have anything better to do, so I'll probably mail you a ring or something. Before we tie the knot, though, tell me some of your annoying habits. I need to know what I'm getting into here.

Awesome! I like those plastic rings that come out of gum ball machines, so if you could get me one of those, that would be great.

1) I take really long showers, even though I feel guilty about wasting water. 2) I have definite sleep issues, so we’ll probably have to sleep in separate beds like they did on I Love Lucy. 3) I have trouble shutting off my brain, so we’ll be having a discussion and you’ll think it’s finished and then every five minutes I’ll say “and another thing. . . .” It’s good, clean fun!

I’m a Libra, which is pretty much the greatest sign . . . ever! My horoscope for this week would probably be something like “Don Wood will refuse to feel you up . . . again. Try putting super glue on his hands or bribing him with candy.”

Your poetry has been published in a bunch of online journals including the one I trick people into visiting. Write me a poem involving rain dances and Pat Sajak. End it with the phrase "Especially in Michigan."

The night before the big storm I was watching Pat Sajak on the television. You were in the backyard, tending our starving garden. It hadn’t rained for a month and the plants were dying for a tasty beverage. When you returned two hours later with dirt under your eyes, I could tell that you were excited. Smiling, you grabbed my wrist, pulling me off the couch. “I know what needs to be done,” you whispered. “There is only one way we can save the cauliflower.” “How?” I asked. “I need to perform a rain dance. I have to do it. I must do it.” You squeezed my hand. “For the vegetables.” So, we took a boat to Apple Island and I waited amongst the trees as you boogied with Chief Pontiac in the moonlight. As I watched, my heart beat faster even though I had prepared myself for disappointment, but your feet kept bouncing as you assured me that rain dances always work especially in Michigan.