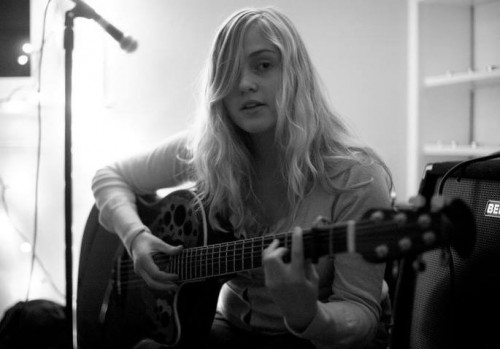 One of the most quietly powerful releases to come from Seattle in 2014 was Whitney Ballen's Falls, a collection of songs that grabs right away but also matures upon listening again. Much of the immediacy comes from Ballen's distinctive little-girl voice, that swoops skillfully and sounds pressed to your ear. And then what seeps in deep are the confessional, thoughtful lyrics. She sings about the softness of her heart, being haunted by ghosts, taking pictures of Mount Rainier. This is private headphone music, upfront and vulnerable, occasionally interrupted by gritty guitars and thick reverbs. Her website is covered in her own sketches, and links to a Tumblr where she has compiled found photographs and made up stories about them with a unique tenderness. She is a true Seattle indie songstress with a love of her surroundings and a strong DIY ethic who will be missed as she ventures south to Los Angeles.

You hosted a concert in your bedroom. You recorded your last album in the Old Redmond Firehouse (in Redmond, WA). Do you find yourself drawn to - or more inspired in - non-traditional spaces?

I am definitely drawn to more untraditional spaces to perform or record. To me, sitting on a stage where I am looking down on people is so opposite of what I'm used to because I'm short and I always feel looked down upon. Plus, my bedroom is usually where I write my songs, therefore it's where I feel most natural singing and playing.


Does your relationship with Snoqualmie Falls have anything to do with being a Pacific Northwesterner, or Twin Peaks, or a personal story?

My album is titled Falls after Snoqualmie Falls because it represents my home. I grew up down the road from Fall City and the falls. There is something magical happening in the trees over there, and it's not just Twin Peaks. I've been visiting the falls, specifically at night, since I could drive at age 16. I just keep going back.

Do you have any boundaries regarding something being too personal to share in your music? Do any of the songs on Falls feel too raw to perform live?

I like to tell people that the majority of my songs are not written about me, or my own experiences with the subject, but to be honest they all are. I think nothing is too personal, and if it were to be, I probably wouldn't write it in a song, but maybe instead draw it or write a letter and send it off to someone if I needed it to be heard. All of Falls is really raw to me because they are very personal songs about really sentimental and nostalgic and painful things.

How much time do you usually spend writing a song? do you have a particular process?

My song-writing process I don't think can be described as a process because I can't recall ever sitting down consciously to write something or put together a melody. If it were a process, it'd definitely be long, since I tend to only come up with new songs every few months, if that. I think the way it happens is like when the clouds get really heavy and they cannot hold themselves anymore, so the rain pours out. For me, I'll be driving somewhere and a line will pop into my head and then I keep thinking about that line and others follow and they kind of just spew out and then at some point, if I remember the lines, I play a few chords behind them to make some kind of progression for a song. Kind of confusing.  I suppose I am really unaware of my writing process because I never really plan on writing anything, it just kind of happens.

What have you been up to since the release of your album? Any plans to tour?

Well, I have been playing shows around town every other month and I have been writing a series of new songs that will be truly "bedroom recordings" that I am super excited about! I am going to be heading down to California for a while for a work opportunity. I am hoping to explore some of Los Angeles' DIY and alternative music and arts venues to play in.

You draw as well as record music. Is there a direct relationship between your music and your visual art?

To be honest, I feel like my art and music are completely different entities. I thought super hard about illustrating the design for my latest album cover, but nothing fit, so I used a photograph I took instead. I think drawing explores my silly and unrealistic side, whereas my songwriting is very real and raw. I can't hide behind it.

Do you feel nurtured by the Seattle music scene?

I feel very grateful to be familiar with our great established and not-so-established music venues here. In the music world, Seattle feels very small. However, every day I am introduced to someone new creating crazy awesome good music and it makes me fall in love with the scene all over again.

What are three things that make you happy?

Recommended listening: "Torn" and "Olympia, Your Bridges" by Whitney Ballen