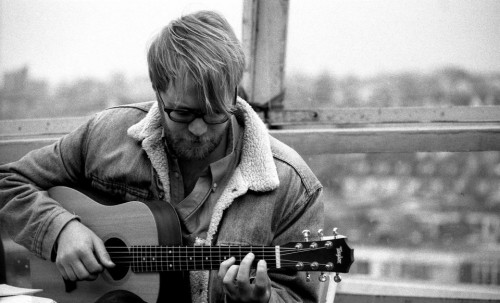 Charles Frail is a young Dutch songwriter who sings of the heart, the body, and the beauties of nature surrounding us in a violently lilting voice over soft nylon strings.

Charles... so we met a couple of years ago in the Netherlands when we were both on tour. Since then you've moved to Germany and started work on a novel. How did all of that come about?

Well, I always wanted to write but got more serious about it in the last four years or so. For the first three of these four years this meant reading, reading, and more reading. Not reading as I had read before, but to see how it was done, to feed my unconsciousness with as many words as possible. About a year ago I felt I was ready to start writing. I thought it would help to demarcate this new vocation with new surroundings. Someone told me there was a lot of good stuff going on in Leipzig so I decided to try my luck here.

Is the music scene significantly different in Leipzig from what you're used to?

I'm not sure if I really know the Leipzig scene yet. Because I've been trying to focus on writing, I haven't really played a lot of shows. Also, the good stuff can be hard to find here. Leipzig is quite a bit cheaper than Amsterdam in pretty much anything you can think of. So that changes the scene here a bit. In Amsterdam there is a tendency to suck the money out of every single square meter, but in Leipzig there are a lot of empty buildings still, because so many Leipziger moved to the west for jobs during the great Depression of the '30s and again after East Germany and West Germany were reunited in 1990. A lot of young people open galleries at these places or start a bar or a vokü (similar to a soup kitchen, open for one or two days a week, often functioning as a bar and venue as well). It's a special place.

Have you ever had a chance to come over to the United States?

I have been in the United States three times now, but would love to spend some more time there. I think what a lot of people from the US find fascinating about Europe, that you can travel three hours and hear a different language, is what I find fascinating about the US; you can travel for days and people will speak the same language. I think both the situation in Europe and the US allows for great art. Bach used to work in Leipzig, for example, and so did Mendelssohn, and they are part of a greater European tradition, but I don't think Sharon van Etten, Damien Jurado, Bill Callahan, or the Dirty Projectors would be doing what they do so well if they were raised in Europe.

I have not performed in the US yet but I'd love to do a little tour there someday. I did some impromptu shows when I was in Canada and that seemed to go very well. In Montreal I was even offered to come and live with someone's family and pay my rent with songs. So I was very close to moving there and probably will some day.

Do you feel that songwriting eased you into novel writing, or is it a completely different process for you?

The first-ever Nobel Laureate in literature, Sully Prudhomme, writes in one of his diaries that music is the noblest of the arts because she does not express thought, but is its source. I think this makes sense; music has an immediacy that words will always lack. This is probably why music without words can be utterly beautiful but words need a certain musicality to be beautiful. I think writing music helps to find the musicality in words.

So, yes, I think the songwriting has helped. And my voice as a writer would definitely have been a different one if I had never written a song in my life.

But at the same time, it is a completely different process. Because words can try to have the immediacy of music, but they are destined to fail. And because novels aren't just about beautiful words. There is a story to tell as well. Also, the novel is about 70% in Dutch, 30% in English. And for my music all the words are in English, so that changes the process quite a bit as well.

How long have you been writing music? Did you start with guitar or with singing? Were your first songs also in English?

I had guitar lessons when I was younger, but although it must have helped, it feels like I had to start from scratch when I picked up the guitar again to start writing songs when I was sixteen. Likewise, I have been fond of singing all my life, but once I started writing songs...well, there is nothing that compares to singing your own songs, really.

My songwriting is all in English. The last couple of years before I moved to Amsterdam, we had exchange students from the United Stated living at our house. This was when the concept of expressing your thoughts in a different language got a hold on me. I started thinking in English when I was alone. I fell in love. I think writing songs has been a way to woo the language. And I think wooing a language is in some ways easier when it is not the language you grew up with. You can decide to learn it only through reading poetry or listening to songs. You can leave out the ugly parts.

Are your influences as a musician different than they are for your writing?

My first songs were Emily Dickinson poems I had put to music, and the music I make now is probably best described as stream-of-consciousness folk, which stems from a literary term. So some influences are apparent in both. I think the opposite of what I said previously, that the songwriting in a way has shaped my voice as a writer, is also true. That I've been thinking as a novelist when writing music, and that this is why I ended up with these long stretches of interwoven songs.

What drew you particularly to Emily Dickinson?

I was reading a collection of American poetry one of the exchange students had left when she moved back to the US. I think it was the poem that starts with the line “I died for beauty” that made me look her up on the internet. Her work is so concise, so rhythmical. I tried to do the same for some Oscar Wilde and Byron poems, but would always return to Dickinson. I would not be surprised if she had some melodies of her own for them. Nor was I surprised when I found out Josephine Foster did an entire record of Emily Dickinson songs.

Do you feel akin to any particular place or decade in terms of your inspiration?

Not really. It is more a topic I'm interested in, identity and authorship. So I can read Fernando Pessoa and all the different voices he brought into being; and Plato talking about Socrates; and Robert Zimmerman saying [Bob Dylan] is still Bob Dylan no matter how much his music has changed. I can read Walt Whitman's Leaves of Grass and his "knit of identity"; and think about why Phil Elverum went from being the Microphones to being Mount Eerie; or Smog becoming Bill Callahan; and the use of the chorus in both Japanese Noh theater and early Greek theater, and forget these things are not happening here and now. Because they still make as much sense as they did back then.

How independent is your music? Do you do your own recordings, booking, packaging?

I'm not the best businessman, so I'm not really good at booking my own shows. Which, unfortunately, has become somewhat of an imperative these days. Sometimes people book shows for me. I'll play shows when asked, but rather don't beg for them. As for the packaging, for my first record Morning it Breathes the sleeves were handmade/machine sewn. I think with all the technological possibilities we have these days music has become less and less physical. I'm not saying technology is a bad thing. But it would be a shame if we didn't also try to use technology to find other ways, new ways, to make music 'physical' again. Packaging is one way to do this. It turned out it took about the same time to make one of the sleeves for Morning as it takes to listen to the record. For me that makes up for the fact that the musicians I used for the record were never in the same room together.  So for the new record the sleeves will probably also be handmade, and I really want the musicians in one room, looking at each other. I've chosen this stream-of-consciousness approach because when you play the guitar for 35 minutes without pausing it might slightly get out of tune, and when you sing for 35 minutes your voice may start to break, and these things are real. It is physical. Every recording will be slightly different. Of course, every recording of every song is slightly different. But here it makes more sense to keep all of them. I'm thinking about recording a series of variations on Mirror River and release these as limited editions with one copy each. So that both the packaging and the recording it contains are unique.

I remember you injuring your hand around the same time I did. Can you talk a little about that experience and how it either held you back or inspired you?

It took me about a month to find out it was broken. There were just a few things that I couldn't do, so I thought it would get better eventually. But after five weeks I could still only play the first twenty minutes of Mirror River and then my thumb would just go numb. In the hospital they said it would have to be in a cast for at least 8 weeks! Fortunately, it turned out there was an operation as well, and because I was a guitar player I qualified for the procedure. After this operation I would be able to play the guitar the next day. Unfortunately, the operation didn't really go as planned. A screw got stuck in a joint, and they couldn't get it out. About a week later, they had come up with a plan to get the screw out, and this time nothing went wrong.

There were moments I got really paranoid during that week between the two operations, thinking I'd never be able to play the guitar again. I guess this prompted me to record every rendition I played of Mirror River; they all seemed so valuable now. I started to appreciate the little differences between the recordings and the whole idea that these were inevitable, and tried to think of ways to create an environment where this could keep happening.

I'm still searching for new ways to play River. Now that basic recording is available to pretty much every one, and the internet makes it so easy to stay in touch with people that live so far apart from you, I'm thinking about inviting some of the people I admire to work with me on one rendition. This could be an entire reworking or just changing one part, singing some of the words, adding an instrument somewhere. And then naming these renditions after the river they live nearby.

Recommended listening: "Nothing Will Outlive This Glory" and "Are You Dead or Are You Sleeping" by Charles Frail