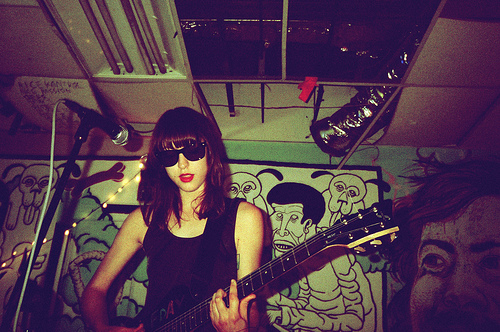 The indie-pop community has long embraced a laid-back, chilled-out aesthetic that can distract from the actual music. Few modern musicians fuse personality with art as seamlessly (and genuinely) as Colleen Green. The lo-fi, drum-machine-utilizing singer/songwriter started out in Oakland with the band The Have Mercy. As a solo artist, she’s released two EPs, Green One and Cujo, with a third due on vinyl in 2012 titled Milo Goes to Compton. (Milo was released on limited edition cassette in 2010.)

Green toured extensively throughout 2011 with bands like Jeff the Brotherhood and Dum Dum Girls. She’s taking a break to record more music but will be back on the road soon.

I first caught word of you while looking for musicians who release albums in a cassette format. What made you want to distribute your music in that format?

I just made tapes cuz they were the cheapest option for a tangible release. And also, I thought it would sound boss.

Your EPs are also available on vinyl. Do you have a personal preference between cassettes and vinyl? Or is it just about giving people an analog option instead of the usual digital outputs?

I really don't give a shit either way. I can listen to tapes in some cars, which I like. But in other cars, you can only listen to a CD, which I don't like. I don't really listen to music all that often though. I don't listen to MP3s. The nice gentlemen that put out my music wanted it to be on vinyl and stuff so that lots of different types of people all over the world could listen to it, and I think that's nice. But for the most part I just listen to music inside my head.

Most people prefer seeing acts at intimate venues, but as an artist, would you like to play somewhere huge like Madison Square Garden? How do you find your sound works in venues of different sizes?

I would and can play just about anywhere. I would play at MSG, no doubt. I just love to sing and play, and it doesn't matter how big or small the audience is.  One of the best things about being me is that I'm adaptable. If I don't want it to be loud, it won't be loud, but it can be if necessary. I just can't sing that loud, that's all. When I have control of my vocals is when I feel most at ease, but hey, what can ya do?

What type of equipment do you use to record your music?

What type of equipment do YOU use? 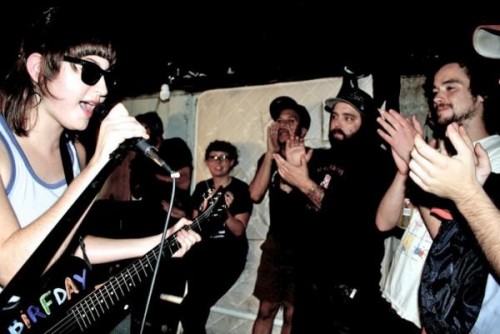 Lo-fi feels like a trendy recording choice for certain artists. Your songs, though, feel extremely genuine, as if lo-fi is the perfect vehicle for your music. I know that the technique was originally out of necessity, but you do you think you’ll continue with that aesthetic in future releases?

Fuck yeah it was out of necessity. That's nice of you to say. I feel like if I was a song, the song would sound like a song from Milo Goes to Compton. I actually tried to make Cujo sound more polished, just for yuks. But the LP I'm working on now, I want it to be even MORE lo-fi.

Nah, it doesn't bother me. Why, is that like a buzz word or something? I thought it just meant that something was low fidelity. Although that also, really means nothing to me. I try not to let stuff like words people say bother me though.

Marijuana is prominent in your work. The cover art of Green One is a photograph of you handing off a bowl, and Cujo features a cartoon Colleen Green smoking a joint. Are you just a big fan of weed, or are you actively trying to push for its legalization?

I mean, all I can do is be me, you know? When I look at the cover of Green One, I see a fucking awesome picture of me and my friend hanging out and enjoying each other's company. It's just a snapshot of our lives, man. And to be completely honest I had run outta ideas for the Cujo cover when I came up with that sketch and handed it in without really thinking about the fact that it was an album cover. But whatever. You know me. I'm not trying to push for the legalization of anything. I don't even watch sports. I just wonder sometimes why I can't buy a single clementine? But wait....I can!

Speaking of Twitter, you should win some kind of social media award. Your tweets are the best. A recent favorite is from November 25th, when you wrote: “Babies are so fucking stupid!” Do you take a lot of time in constructing a tweet, or do you just pitch them off? Also, you’re right.

Well thank you very much! I don't take much time in constructing my tweets. I just think of stuff and txt it right away. Then when I eventually go on the internet, I look at it and laugh.

I moved to Oakland with a band called The Have Mercys, and we basically just started booking shows at our house with bands we thought were cool.  We made friends and toured a bit and had a tape which I think was very important. Facebook wasn't really what it is now so it wasn't just like, a bunch of people shared it or whatever.

I moved to LA with the intention of making a tape just by myself just because I wanted to. I never planned on playing live because I wasn't a "real band." Then my friend and mentor Nobunny asked me to play a show in L.A. with him, and I was like, why not? Then I booked a tour with my friends The Big Big Bucks because I wanted to go to SXSW and get a ride back to Boston. I wanted to have a CD as well as a tape to sell on tour, cuz I've noticed that a lot of people turn their noses up at tapes. So I made the 4 Loko 2 Kayla CD-R as sort of a tour supplement to the Milo tape and put it on the internet for free. I think that was the best thing I could have done. Also going on tour a bunch helped a lot. 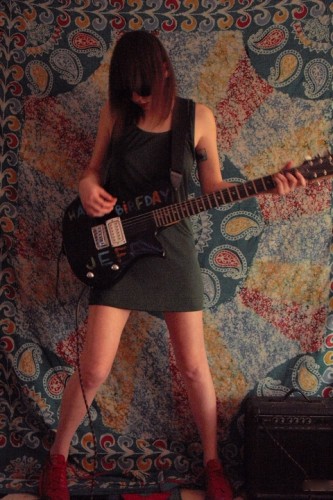 A lot of young people struggle with the decision of whether or not to make a break for the “big city.” Do you think it’s necessary to move to a highly populated area in order to get attention as an artist?

No way. I mean, I've been living in a really big city for the past couple of years, and I am way more isolated than I ever was living in Boston or Oakland which are both pretty fucking small ass cities. The best thing you can do is tour. A lot of bands think "I don't have time" or "I don't have the money," but you just need to like, do it anyway. And if your music is good people will take notice. But if it blows and isn't catching on anywhere, then you need to get the net and just like go back to school or something. Unless you're totally rich. In that case you should be able to just do whatever you want.

I love the percussion on your albums. Do you use a drum machine out of necessity or personal preference?

Necessity and personal preference alike. I can't play the drums!

A big issue with indie artists is the “legitimacy” of licensing music for commercial use. There was a recent Twitter beef (now squashed) between Patrick Stickles and Kurt Vile about a Vile song appearing in a bank ad. Where do you generally fall on the topic?

Hm. I dunno if I would let a bank use my music, but sometimes they trick you, you know? I keep all my money in a plastic bag for that reason alone. And half of it is Canadian!

The title track from Green One features the chorus “I am just a green one.” Are you referring to your last name, marijuana, or does the color mean something more to you?

I dunno, it's like, green is just what I AM, you know?

I love the handclaps that appear on some of your songs. How do you know when a tune needs some of those?

Well, the drum machine offers precious few percussion choices, and the hand clap happens to sound the best of all. There's like a shaker, and a rim shot, but I don't really like those as much. When I really need to spice things up, I go for the fake hand clap OR possibly the fake cowbell. But on Cujo I also used a real hi-hat. So that was fun.

There is a remarkable consistency from Green One to Cujo in solidifying a very unique, effective sound. The biggest distinction between the two EPs is that Cujo feel darker both musically and lyrically than Green One. Was that move a conscious decision or did the songs just turn out that way?

The songs on Cujo are just the songs that I happened to come up with at the time. I wanted it to be inspired by the sound I imagined Art Fag as a label having, but even more commercial. I wanted it to be really poppy and melodic and sweet of course, but also moody and kinda sad.

Yes and Yes! I am currently working on a new LP for my label, Hardly Art, which is the best record label in the entire world. It'll be out sometime in 2012 I hope. Also, Milo Goes to Compton is coming out on vinyl in February, and you can already pre-order it!

In your music, interviews and tweets, you come across as a very easy-going person. Is there anything about touring that annoys you?

The only thing that bothers me when I'm touring is having to deal with people who try to tell me how I can/should improve my art. People like that really annoy me. But annoyances are few and far between and easily forgotten. The worst thing about touring is not being able to go to bed at a reasonable hour and not getting proper nutrition. Other than that, I absolutely love being on the road. When I'm not on tour it's like, who knows when I'll brush my teeth next?