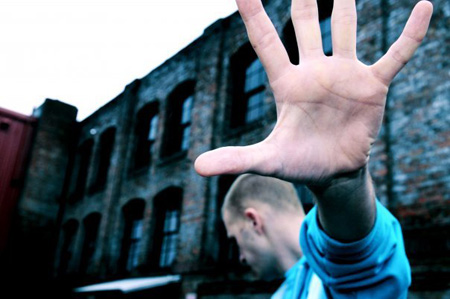 Cody Foster (Sadistik) is a Seattle artist whose music I like to think of as shoegaze rap. His first album, The Balancing Act

, has a distinct emotional resonance for a hip-hop album, and the strings and samples throughout his music sometimes evoke bands like Goldfrapp. This was followed by The Art of Dying

, a collaboration with Chicago artist Kid Called Computer, another explosive but almost romantic collection of songs. About to leave for his first European tour this April, Cody came over to watch American Psycho

and talk about the two albums he's working on now. (We also conducted an interview about film.)

Anna-Lynne Williams: So tell me about how you're going to Europe for the first time and playing. What made you decide to do that now, and what are you going to be doing?

Sadistik/Cody Foster: I run everything myself, including shipping, so I kind of kept tabs on where I end up mailing things and where my markets are. And one of the biggest markets I have is Europe, and a lot of European kids email me and they tend to be more consistently enthusiastic about it. So I've been wanting to go for a while. And then finally I just kind of mustered the gumption to throw some things out online and see if any fans wanted to help. And I knocked out an itinerary and a lot of people helped out, sharing contacts and things like that. And I was fortunate that most places I contacted knew who I was or had at least heard the name or something. So people were receptive to it. I'm really excited about it.

AW: Are you going to get to take some days off and see other things or are you kind of just busting it from city to city?

CF: I was planning on taking some days off, but then I got offers on those days. So...I have a day off in Berlin, which I did on purpose because I want to see it. And then a day off between Germany and France, I'm hoping I can see Amsterdam.

AW: You know what your longest driving day is going to be?

CF: I have a day from somewhere in Germany to Italy. So that'll probably be the longest one. And I haven't been methodical enough to really think about it or plan that. So...that could be bad.

AW: So it seems like you are really influenced by movies, with film quotes in your songs and naming your dog after a director. Are there any specific movie-watching experiences that have led to you writing something?

CF: Yeah, movies are one of the biggest influences on me, usually more the mood of them and certain characters than the actual story. I'm always drawn to characters that remind me of myself, and I happen to like the weird, creepy sociopathic ones that still have a charm, that you still root for. Like Patrick Bateman. And a lot of...I like classic old existential movies, like Ingmar Bergman and old Kurosawa and stuff like that. It nudges me towards thinking about deep bullshit, meaning of life, all that. And it ends up later, like hours later, and I'm sitting in my room at four in the morning, drinking and writing, it always ends up seeping out in some way.

AW: I was going to ask you, too, about the fact that you don't seem like you sleep very much. Do you sleep, ever?

CF: It's getting better. From October until mid-February I didn't sleep at all. I would sleep maybe a couple hours a day and it was really bad sleep and I had night terrors a lot. So even though I did sleep it was stressful and I would wake up. But lately it's way better. I'm actually sleeping almost too much now, I feel like my body's trying to catch up. So I'm drinking a little bit less, sleeping a little bit more.

AW: When I got back from Switzerland, I just like laid on that couch for two days.

CF: Yeah. See I thought I was going to do that when I got back from tour. Then it was like, I slept for three hours and then got up and hung out with people. But it's kind of a cyclic thing, too, not being able to sleep and then it's like, "OK, if I drink enough I'll fall asleep."

AW: Right. And then if you drink you usually wake up with a jolt. I had a lot of wine last night and I had horrible nightmares and woke up early.

CF: Yeah I kept having dreams of like people mutilating me.

CF: Seriously I had a dream this dude was like cutting my chest open with scissors. It was really unhappy shit. And now that I'm actually sleeping my dreams are just really stupid and corny, you know, like a normal human being.

AW: So another question...do you usually start with words for your songs or do you start with samples and beats?

CF: It's a mixture of both. In general I start by hearing the instrumental. It's usually just a section of it or a loop, and then I write and get the idea, and then work with the producer and be like, "This is the content and the mood of my lyrics." And then let them kind of sequence it and structure it. I complain over and over til it's how I want. You know, try to make it better. And then there are a lot of times where I'll just be driving or in the shower or...there are times where I just literally wake up out of sleep and there's a line in my head and I write down the idea. And I have little symbols in my notebook even. It's like, "This is an untapped idea; that isn't the right length," or whatever. And then if I write a song that that might fit, which is easy because most of my shit's abstract, then I just pull something from that other page and restructure it so it fits in something.

AW: Do you usually write every day?

CF: Yeah, every single day. I would say I write probably at least two hours every day. A lot of it's really bad.

AW: I get jealous of people like that 'cuz I haven't been like that since I was young and now I have to kind of set aside time that's just for music and then it'll come to me.

CF: That's what I do too. I'm so obsessed with trying to finish these albums that I'll just sit there and write. Or you can -- I don't do this actually anymore -- but like make yourself do writing exercises and write for 20 minutes without stopping. Or changing your environment helps.

CF: Yeah. Or my advice for all young writers is to get in a bad, intense relationship.

AW: (laughs) Yeah that works for most people. I remember being on a road trip with a friend and he kept pulling over and writing stuff down for song lyrics and I was just like "Man!" 'cause I don't ever do that anymore.

CF: I write on the freeway all the time when I'm on road trips 'cause that's when you're not distracted. That song "Searching for Some Beautiful" I did? [view video below] I wrote most of that first verse telling my girlfriend at the time in the front seat to like, "Write this down..." so I just kept replaying the beat over and over while I was driving from Seattle...

AW: That little song "Fineline" on the China Mountain record I wrote in the Trader Joe's parking lot.

CF: See sometimes those are the best ones, it's just weird how that works.

AW: So... how many components usually go into one of your songs and how many tracks are you working with?

CF: An absolute ton. Just vocally...it all depends on the song and actually my newer stuff is a lot simpler, like the stuff I sent you. But some of them, especially on Art of Dying

, I had some songs with like 80 tracks. Sometimes just like one growl in the background or weird effect will have six or seven tracks, and they'll just be panned and effected.

AW: Did you mix those down at home or did you go to a studio for those?

CF: I mixed them at home and then I sent them out to get professionally mixed after I did most of the legwork, you know, just to keep a consistent sound. Yeah, I'm leaning toward making it a little more simple now because for awhile I was like, "I'll just make the most complicated thing that nobody else can do and then I'll be the best." And now I'm kind of learning that sometimes the most difficult thing to make isn't the best at all.

AW: We tried that in Trespassers [William]. We had come up with a list of rules for our next record after Natural Order of Things

, because it had too many tracks and too many effects, everything was running through weird amps and things. So we made a list like: no songs can have more than 20 tracks, this is how many guests artists we can have on the record, this is how long we'll spend on each one, this is the amount of time in between writing a song and recording it...

AW: But we didn't actually end up doing any of those things. We didn't do that...but it was a good plan.

CF: I feel like I've already shown that I can do the really weird syncopated and layered stuff and tricky, fancy rap shit. And it's fun...I always do that because it's more interesting to make and I don't get bored as fast. But I've already kind of treaded over there a lot and I want to try something else, and try to make something maybe even...my version of a little bit brighter, paint with some different colors, you know, instead of always using the same hue. So now I'll never get bored or predictable.

AW: And what are the two albums that you're working on right now?

CF: One is Flowers For My Father, and that's the one that you're on so far...

AW: Maybe. I have to do more work on that.

CF: Yeah. You should be on like seven songs.

CF: And that's with multiple producers. Kind of like my first album, I used different people... And one that in my head I'm calling Karma By Candlelight. But I don't know if I'm going to call it that. Having two albums with alliteration might be cheesy. But that's with Emancipator, and that's about half way done. Yeah, I'm excited about that one.