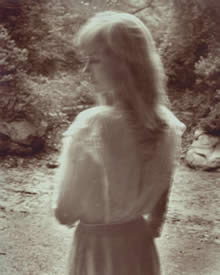 Danielle Stech-Homsy's primary instruments are ukulele and a sweet, fairy-tale voice, though she balances these with spooky samples and arrhythmic loops. Recording as Rio en Medio on Devendra Banhart's record label, Gnomonsong, Danielle writes songs about her parents and turns other people's poetry into music. Throughout February, she will be performing in Paris and London.

In the following interview with Identity Theory, she speaks of The Little Prince, three-dimensional music, and recording blind.

were never intended for the public? Now that you have a following and collaborators, do you feel this will affect your approach to songwriting?

To be honest, when I am making something, I don’t really have room in my head to think about what will happen with it when it is completed. It’s not that I specifically didn’t want to share that music, it’s just that I wasn’t at all concerned with that. I was just trying to make something that meant something to me. That’s hard enough! And I continue to work that way. I guess I have sort of a one-track mind. For instance, I just recorded an album. I’m not sure how or when or if it will be released. In a way, I couldn't care less. The point is I made those songs, completed that process, and now I can look forward to making something else.

Interesting that you suggest that lyrics could be a distraction. I think they really can sometimes. So far they have been totally integral to my music-making, the spring of it all, but maybe that will change. I love poetry, but I can't stand literariness, if that makes any sense. I think that is what drew me to music and away from writing, which seems to make concessions to--or is often preoccupied with fighting against--the tradition, the academy, or the Official Standard.

I draw much inspiration from visual art and from nature. I like the idea of constructing things, making objects. I try to make music that is three-dimensional. By my definition, the nature of three dimensions is that each side is viewed with a different perspective and can be understood differently according to the context in which you behold it. Perhaps someday I will learn more about moving images. I am interested in light and shadow and reflection.

I like the physicality of older technology--and records, even tapes. CDs have always been just a piece of trash to transfer data. Now with digital downloads we have no choice--it is our moral obligation as global citizens to do away with CDs! But I like handmade things, and album artwork is important to me.

There's a passage from your song "Girls on the Run" (words from the poem by John Ashbery), which stands out to me in this musical context because it seems to reveal a pattern in the music industry. "But you know how fashions are in fashion only briefly, and then they go out and stay that way for a long time, then they come back in for a while." Can you comment on what struck you most about this line?

I really like how it goes on and on. That’s an absurdly long sentence for a poem--or a song for that matter! And it goes on even further than that: “Then, in maybe a million years, they go out of fashion and stay there. Laure and Tidbit agreed, with the proviso that after that everyone becomes fashion again for a few hours.” It’s amazing. I’m not going to try to figure it out--fashion, that is.

Do you feel a sense of responsibility, in bringing the words of poets to melody for the first time (i.e. John Ashbery and William Blake)?

Not really, I can’t be burdened with that responsibility. Or I guess more to the point, I feel like I instinctually show respect by responding to a great work with my best shot at creative integrity. I feel an affinity with the words and their authors inspire me, but I am just as interested in decontextualizing information to create new meaning as I am in trying to reproduce an author’s original message. 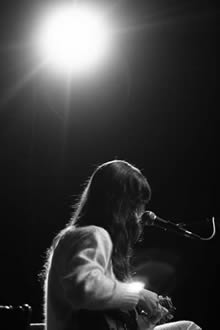 I try to create new arrangements rather than imitate what is on the record. It is such a different transmission. I really like working with other musicians and non-musicians--two of the bandmates I’ve toured with were visual artists. I like to be surprised. I also love performing alone and in the simplest way--just ukulele and voice. It is sometimes hard to know what to expect from an audience so I try to be responsive to the energy around me, but at the same time I am focused on honoring the inner voice

Your website makes reference to a possible dance project. What dance artists or eras of dance music are the biggest inspiration to you? Do you feel that you will revisit the experimental folk genre again, or do you plan to explore numerous genres of music?

I recently did a collaborative piece with a spectacular aerialist named Cohdi Harrell. It was loosely based on The Little Prince. He performed on the ground and in the air, and I played the ukulele and sang. It was one of the most exhilarating performance experiences I’ve ever had. I hope we can work together again.

In terms of “dance music,” I have a huge soft spot for anything that makes you want to move. I love lovely, crappy disco, and I’m crazy for Giorgio Moroder and Arthur Russell’s stuff. I have a 7" cover record coming out this spring on the Seven Inch Project. I’ll let the tracks be a surprise!

No, not really. I became a musician because I had these songs that were demanding things of me, then the recordings fell into the hands of other musicians, and I suddenly had an opportunity to play around.

I made an album with a friend of mine and fellow musician named Tim Fite. It is called The Water Island. It was a highly inspired, truly collaborative project that we are both really proud of. Hardly anyone has heard it though because neither of us could be bothered to find a label for it. You can hear some of it on MySpace. True collaborations--where more than one person has final say--can be really hard but they are also particularly rewarding and I really have a lot of respect for the bands that pull it off successfully.

The desert is full of silence and so is all my favorite music.

I think I am a bit of both. I am very free with many aspects of the process and I leave many choices up to chance. I like recording blind, for instance--meaning I will record a track against several muted tracks, then unmute and see what it sounds like. But, despite this looseness, I always have a very specific feeling in mind that I am trying to capture. I just won’t know it until I hear it and it sometimes takes a lot of chaotic or random effort to find it.

I think there are hidden treasures in every era. There are things I love and hate about every decade. It all seems to be about the same human experience.

Afternoon sunlight after a storm, starting a road trip at the crack of dawn, Christmas

Grow up and never grow up.

Identity Theory's recommended listening: "You Can Stand" and "Kill the Messenger" by Rio en Medio