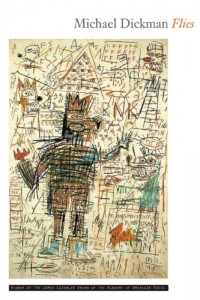 Michael Dickman was born in 1975. He is the author of two books of poems, The End of the West and Flies, as well as the co-author of a book of plays, 50 American Plays, all published by Copper Canyon Press. He lives with his family in New Jersey.

J. Dee Cochran: Flies, as the book title suggests, are a huge symbol within your second book. With the idea of flies, which live such a short time and reproduce at obscene rates, the reader gets an accelerated sense of time, heightened by fragmentary lines. Simultaneously, there are lines that offer ideas of fluidity, such as loves ones swimming, which slows things down. I was wondering how you experienced time in the writing of these poems. If the lines came with the spirit of amphetamine or opiate?

Michael Dickman: I like to think they move back and forth between the two, as I moved back and forth while writing them, between a kind of rushing feeling to get something down before it disappears and the slow drift of how my memory works and how I tend to write poems, which is very slowly in short bursts guided by voices. Not crazy voices but voices none the less. I would also like to think that one line gives birth or reproduces another line, like flies reproducing! In my poems, though, it would be an obscenely (to use your word) slow rate.

JDC: Many books have offered creative writing as a therapeutic device to deal with loss. I’m wondering if you found the act of writing the poems in Flies to be therapeutic to your grievance process.

MD: I did not. Not at all. Not once. Although it was nice while making those poems to have a loved one in your head and sort of keeping you company. But writing poems has never made me feel healed about anything. On the other hand, reading poems has saved my life.

JDC: What do you consider one of your guilty reading or viewing pleasures?

MD: I don’t feel guilty about these things, but I am addicted to watching movie trailers. Lately I’ve been reading and enjoying the collected Western stories of Elmore Leonard. But again, I don’t feel too bad about it. I did watch the first two seasons of Downton Abbey and loved that, and that is embarrassing. A little like watching a soap opera about how great plantation owners were...

JDC: What is your favorite conversation surrounding poetry?

MD: The only one I’m interested in is what poems and poets you are personally excited by and moved by at the moment. What poems make you want to yell from a rooftop? Fall in love and scream your head off? That’s all I really care about. The rest is middle management job security cocktail banter.

JDC: In another interview, upon being asked which of your own poems you might offer to someone who doesn’t like poetry, you (modestly) first offer Ginsberg’s "Howl." Is that a poem that originally drew you toward poetry?

MD: The first poems I ever read, and one of the most profound reading experiences I’ve ever had, was Pablo Neruda’s book of love poems The Captain's Verses. Soon afterwards, though, I was given a copy of "Howl." What Neruda did was to show me that you could express yourself as a man in a particular way that didn’t mean silence and violence. What Ginsberg offered was a poem that could include your entire sensory experience as a human being. Both books I read almost every year.

JDC: The generosity and friendship exchanged between poets is often overshadowed by discussions of contests, fierce competition, and pobiz. I was wondering if you might highlight any small or large act(s) of kindness you have seen or experienced within the world of poetry.

MD: I have been very lucky in my friendships with other poets and have been able to almost wholly avoid the undergraduate spitefulness and pinched-souled complaining that are the gasoline and exhaust fumes of what you called “pobiz.” I wouldn’t be able to direct you to one particular moment of kindness because they are being performed every day. The poets I like and love and have been lucky enough to be surrounded by advocate for each other, despite outward trappings of ‘differences,’ from C.K. Williams to Ben Lerner, Susan Wheeler to Dorianne Laux, and Major Jackson to Graham Foust.

JDC: Many people have given favorable reviews of your poetry readings. I was wondering how you experience readings. Do they ever make you nervous?

MD: They make me very nervous. They always have and I think they always will. Despite the fact that I know it is a lucky thing and an honor to be asked to read in public and despite the fact that most likely no one there wants to kill me, I still get butterflies in my stomach made out of razor blades and rubbing alcohol. And then after the last word of the last line is read I feel all of that leave my body in one wonderful breath. And then I can enjoy myself! It is also true that I love going to readings. I love being read to. It’s such a wonderful thing to do as an adult.

JDC: Many poets are asked who their ideal reader is. To twist that idea a bit, if you could have any celebrity/public figure read aloud one of your poems at a national commemoration, which public figure and poem would you choose, and why?

MD: I don’t think I could do much better than The RZA reading my poem “Imaginary Playground” at a national commemoration of city parks for reasons that may or may not be readily available. Would you go to that?

JDC: What are you working on now? Can we look forward to a third book of poetry soon?

MD: Not too soon, I’m happy to say. It may be that I am halfway into a new book of poems. I could imagine a book coming together in 2015 or 16...The poems I’ve been writing lately have less to do with family and friends and a personal past and more to do with animals and trees. I’ve been reading John Clare lately with a great deal of interest and getting outside more.