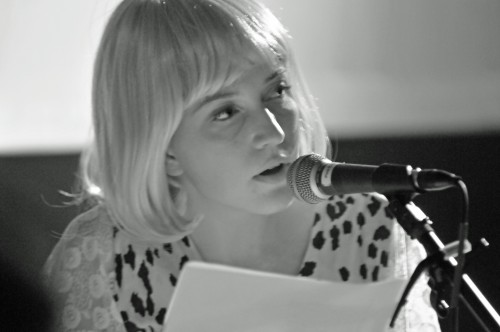 Jillian Weise’s recent collection, The Book of Goodbyes, won the James Laughlin Award from the Academy of American Poets and the Isabella Gardner Award from BOA Editions. Her other books include The Amputee’s Guide to Sex and The Colony. She is a cyborg and writes about that in Drunken Boat, Narrative Inquiry in Bioethics and The New York Times.

Congratulations on recently winning the James Laughlin Award for The Book of Goodbyes. What has receiving the award meant for you? One assumes the formal note of praise and exposure would invigorate one’s work, but I also wonder if there comes a sense of pressure or urgency with it.

Thank you! I admire the poetry of Jeffrey McDaniel, Brenda Shaughnessy and Susan Wheeler, so it’s an honor to be selected by them. It was invigorating to read “Café Loop” at the Awards Ceremony. I almost read a quieter, less disabled poem. I had to invoke my heroes to work up the nerve.

“Incision” is an exquisite poem, which was rendered into an equally stunning animated video featured on The Poetry Foundation’s website. Could you talk about how the video came about, the experience of working with an animator, and your thoughts on pairing videos and poems together?

I got a call from the Poetry Foundation. They picked the poem and the animator, John Roberts. He did a fantastic job. The dominatrix-goth vibe suits the tone.

Known as a playwright and poet, The Book of Goodbyes might also add the distinction as fabulist. One of my favorite parts of The Book of Goodbyes was the whimsical segment called “Intermission” wherein finches consider topics such as surrealism and the desire for an anthology of their species. How did the idea for the intermission start to take shape in your mind?

The idea took shape while I was in Buenos Aires. Each day I would write emails to one poet and never send them. They began, “Dear Scop: you stink,” and “Dear sweet nuts: what are you doing.” Then I would go to Confiteria London City where there’s a table set for Julio Cortázar and I would sit across from his ghost and write. “Tiny and Courageous Finches” happened there. Surely, I was still writing to the one poet. But I was also writing to Cortázar’s “Carta a una senorita en Paris” and Porchia’s Voces. I thought: This is stupid. This is very silly. Back home, I took the finches to a poetry salon. Kristi Maxwell was there. Dana Ward was there. Matt Hart was there. I love their work and they were into the finches and that meant a lot to me.

If not posed with employment obligations or geographical restriction, where in the world would you like to write your next book of poems?

I would go to San Miguel de Allende or Barcelona. Or back to Buenos Aires. I really like their poetry readings. Lights off. Poet sits at a desk. I like the routine, too. Dinner at 11 or midnight. Milonga at 2 or 3 am.

The term black comedy has been used to describe your poetry. There are moments of Larkin-like remorse paralleled with a buoyant irony. For instance, I’m thinking of the estranged lover who keeps leaving phones messages. While despair and desperation fuel many of the lover’s actions, we also laugh at the many voices he takes on, such as Catullus --maybe we are all speaking as Catallus in damaged love affairs. When speaking of contemporary poetry, black comedy is a rare, if not mystifying, appellation. Do you embrace this superlative of noir?

I’m all for noir. What is a cyborg poet to do? If I’m comic, then I play into the carnival show. If I’m tragic, then I reinforce centuries of pity for the disabled figure in literature. Noir warps the comic and the tragic.

Do you have a favorite play or a play that inspired your own work?

Sarah Kane was a lightning bolt to me. Her play Phaedra’s Love ends with Hippolytus spying a vulture above him, and saying, “Vultures. If there could have been more moments like this.”

In 1958, Freud wrote Some Character-Types Met with in Psycho-Analytic Work, an essay that analyzed Shakespeare’s Richard III in order to cite a correlation between physical disabilities and “deformities of character.” Freud argued individuals with debilitating injuries often feel they have been wronged by nature and therefore feel they are owed reparations. While many representations of disability in literature seem as reductive as Freud’s analysis, The Book of Goodbyes feels refreshingly indifferent to convenient archetypes. There is either no victim in this book or every character is as equally a victim in the quest for love and intimacy. When writing the book, was there a conscious resistance to the trajectory of what we read in so many canonical books?

J. -- This is such a great question. How much is conscious? How much subconscious? I was aware of the scripts for disability: Be good. Behave. Teach us. Be weak. Be vulnerable. Teach us. Be sorry. Be afraid. I was aware, am still aware, of bad writing. All the blind moons, deaf skies, phantom limbs, lame excuses. And the standard media representations. Here is a disabled hero! Inspiration porn, as we call it. For relief, I read Rosmarie Garland-Thomson and Paul Longmore. I read the rebels of literature, writers like Kathy Acker and Judy Grahn and Ishmael Reed. And thankfully we now have Beauty is a Verb: The New Poetry of Disability (Eds. Jennifer Bartlett, Sheila Black and Michael Northen). I believe they’re working on a companion anthology in fiction. Can’t wait for that.

The Book of Goodbyes reads as though the poems were written with the intention of assemblage, each poem lends significance to the next poem. Did an overall sense of narrative expedite the process?

The narrative emerged after many, many revisions. Originally, the manuscript was called “Semi Semi Dash” and the finches were scattered throughout. The poet John Drury suggested they nest together. The last poem I wrote for the book was “Poem for His Girl.”

Poets are often asked who their favorite poets are. Instead, who is your favorite prose writer and why?

Julio Cortázar for the magic.

What lines of poetry would you like to fall asleep to? 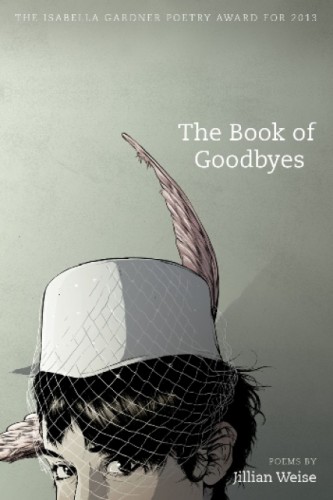