Artist and wanderlust William Wacker shares images and impressions gathered during his recent tour of Asia, why he needs to catch up on vampire flicks and how, when it comes to art, it’s sometimes best to “shoot from the hip.”

Alexandra Tursi: Could you tell us about the stories behind the images you are sharing?

William Wacker: This portfolio was shot during a nine-month tour of Japan, Indonesia and South Korea. I really prefer to allow the images to tell their own story, even if that narrative may be polyphonous.

The story behind the portfolio has to do with my wanderlust. I had a friend teaching in South Korea, so my girlfriend and I decided to spend a year teaching there. The Korean visa is tied to the school where you teach; so native English speakers sometimes get treated like cattle over there. It’s a really degrading type of ownership.

After a tumultuous few months, we politely told our boss to f-off and traveled to Bali and lived for a bit in Japan. Bali was incredible and reminded me a lot of India, which is by far my favorite location thus far. Japan was equally incredible, but in a very cement-clad, consumerist way. Anyway, I am trying to put together a portfolio or book that could go along with Michaud’s “A Barbarian in Asia.”

AT: What do you need in your studio before you set to work?

WW: Oh...a studio...I can't wait. I am currently living out of my truck and on couches and in basements between Portland and the bay area of California, so I suppose I really only need my computer, my camera and my lovely Olympia SM9 typewriter. Other-than-that, I love myself some coffee and really need to feel somewhat organized. As Flaubert says: "Be regular and orderly in your life, so that you may be violent and original in your work."

AT: What is the creative process like for you?

WW: It varies based on medium. I only really feel comfortable when I have a lot going on. As long as my brain is working in all capacities, I feel content. Most of the time I can't recall actually creating a piece. I see it a year later and realize that I don't even remember fashioning it.

AT: What technical considerations did you employ in your photography?

WW: I usually shoot from the hip, so I really just try to adjust my light meter as best as possible. The rest is Photoshop, although I try to keep the integrity of the photo without any unnecessary enhancement.

AT: What are you currently working on?

WW: I am currently working on adding some type of narrative element to a suite of abstract watercolors I have been experimenting with. I have been working with watercolors for quite some time now. I used Gerhard Richter's watercolors as a beginning point about half of a decade ago, and I tried to push the medium to its utmost extremes regarding opacity, color, layering, etc. Now, I want to create a narrative within the abstraction I have attained.

I am also working on a number of fiction projects including a novella, an adapted play and some short stories. Without giving too much away, I am taking two character's dialogue from a movie and plugging it into one of my favorite two-character plays. My novella chronicles my extraordinarily bizarre experiences working in the mortgage industry and witnessing the genesis of our current economic situation; think “Boiler Room” meets “Lonesome Jim.” 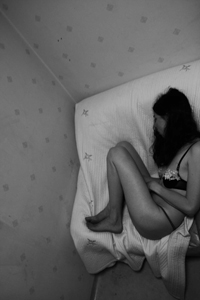 AT: Have you ever made an artistic pilgrimage? If so, where did you go and why?

WW: I have not. Or, I do everyday. I try always to create something. Every second is ripe with opportunity for a story. 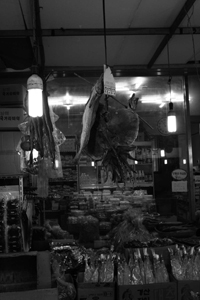 AT: Who are three other photographers you think are readers should check out?

WW: I was particularly taken with a contact sheet by Seiichi Furuya. It was taken during his wife's suicide while he and his son were watching a parade on the television. It is quite haunting.

AT: Name a book that has inspired your work as an artist.

WW: Some of my favorites: Tristes Tropiques by Claude Levi-Strauss, The Impossible by Georges Bataille, The End of the Affair by Graham Greene and The Alexandria Quartet by Lawrence Durrell. Other than that, I love Leanne Shapton's new book, and I have been piously listening to the band Man Man while painting.

AT: If you had the time, what else would you do?

WW: I kind of want to watch the first season of True Blood. My girlfriend loves vampire movies, so I should probably try to set aside a weekend for that. 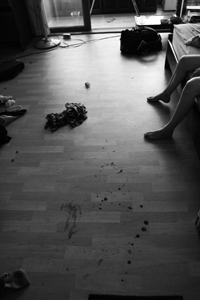