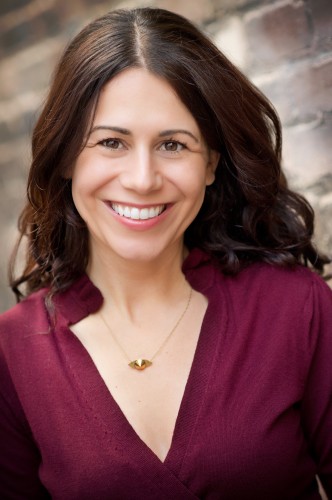 Natalie Bakopoulos has written for Granta Online, Tin House, and Ninth Letter. She teaches writing at the University of Michigan and is a contributing editor for Fiction Writers Review.

The Green Shore, Natalie Bakopoulos' debut novel, takes place during the Greek military coup and dictatorship of the late 1960s. Read an excerpt.

Did The Green Shore turn out like you wanted it to?

I wrote the best book I could write at the time. I gave it everything. But I think our initial vision is always far more grand, more epic, more wonderful; we all want to write the perfect novel. And then our own imperfect, messy, inadequate selves get in the way. Zadie Smith, in an essay called “Fail Better” that ran in the Guardian in 2007, refers to something she calls the “map of disappointments”: “a suitable guide to the land where writers live, a country I imagine as mostly beach, with hopeful writers standing on the shoreline while their perfect novels pile up, over on the opposite coast, out of reach.” You know. Her usual brilliance. I found this idea strangely comforting.

What was a specific complication you encountered when writing the novel?

The entire process felt overwrought with complication! The most challenging for me was balancing the multiple points of view; in particular I found the management of time and space and action/reaction to be difficult with such a large cast. At first I kept thinking that time was what was moving the book forward. Then I realized it wasn’t time. Time would pass anyway. I didn’t have to get from day to day. I realized it was character that gives a story its structure: the desires and choices and anti-choices of a character, the way one action affects the next, the way that no matter how young or old or wise or naive we are, most of our choices are, in many ways, irreversible. But we move on from them. This may seem obvious, of course, but in the process it felt ground-breaking!

Given the historical context, what kind of research did you do for The Green Shore?

I read everything I could find about the period, from history to personal memoir to newspaper and magazine articles to resistance pamphlets. I talked to people who had lived in Athens during the junta as well as to people who had left because of it. My aunt Eleni, to whom the book is dedicated, was a wonderful source. She answered a lot of my questions and told me stories of her own experiences, offering them to me to do with what I wished. Eleni died in 2006, when I was in the very early stages of drafting, but her voice and ideas were always in my mind as I wrote. I can only hope she would have liked the book.

I like to write in the mornings, early, starting around five or six o’clock. Stumble to the computer with my coffee and let myself wake-up through the prose. By nine or ten I’m generally tapped out, or I have other work to attend to. I’ve become so used to writing in the early hours that if something happens and I don’t get to it, if I sleep in or have other things to do, I feel the entire day is shot. I could sit down to write at ten and it feels too late. But even if I’ve written for an hour in those early hours, I can return to it later: at noon at six, in the evening.

Do you believe in outlining when writing fiction?

I think for some writers it can be helpful. For me, it doesn’t work that way. Sometimes I might see an event in the future that I want a character to move toward, and I suppose that can be a certain kind of outline. What’s more useful for me is the reverse outline: to write a draft and then outline it, to look at its skeleton and see how it’s progressing---this I think can be helpful for novels. I also can’t really outline when I write nonfiction---I write everything in sections and then start to see how they piece together.

Which author do you find yourself wanting to reread?

So many of them! When I was younger, say, in my teens, I’d reread books over and over again. Now, I have lists each summer of all the books I want to read and reread, and I so rarely get to them. But I’m forever rereading parts of books and there really is no pattern to it: opening chapters I’ve loved or sections I can’t get out of my mind. Sometimes I’ll reread books I didn’t particularly like the first time around just to give them another shot, and other books I’ve loved but have never returned to and probably won’t. I have books that are my favorite that I’ve only read once, and there are other books that for whatever reason I end up returning to every few years. I’ve read The Great Gatsby many times, as well as Lolita and To the Lighthouse. I must have read Jane Eyre five times before I was nineteen, and when I read it again in graduate school it felt both familiar and foreign. I also write book reviews, and so often I’ll read a novel three times in a row as I’m reviewing it.

Why should (or shouldn't) an aspiring writer consider pursuing an MFA?

To be able to spend two or three years devoted to the art of writing is truly a gift; I don’t understand why there’s so much backlash against MFA programs. I don’t think MFA writing “sounds” the same as often as people like to say. I think if you’re a nervous writer who's writing for a group of peers in your classroom, doing what you think they will “like,” you will be a nervous writer writing for an audience and hoping to please them, too. It also prepares you for criticism and gives you a sense of community. An MFA is a way to give yourself time to devote to your writing. No one is going to “teach” you how to write, and you’re not going to rise out of an MFA program with a guaranteed six-figure deal. But it will give you the intellectual and artistic space to think about and work on your project. If that’s what you’d like, I think it’s a good choice.

Who do you envy the most?

I envy people who are fearless and allow themselves a sense of entitlement (though not an overly inflated false sense of entitlement---there is a difference) to do the things they want. Who take risks. Who are spontaneous and not afraid to not do the things that are expected of them. Lena Dunham (the creator and star of HBO’s series Girls) has been getting a lot of attention, and I think it’s because she seems pretty fearless. Or maybe she’s full of fear, actually, and allows herself to lean right into it. Maybe that’s what I envy: a blatant display of vulnerability. I wish I had had that sort of vision and depth and insight at her age; in fact, I wish I had it now!

Are you a spiritual person?

I am an often-hazardously emotional person. Does that count?