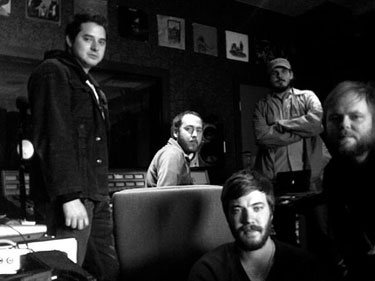 Midlake didn't wait until their third or fourth album to start branching in new directions. Between their two full lengths (and a handful of EPs), they have leapt from lo-fi to extravagant, from modern to nostalgic. Which is why the prospect of a new Midlake album is so exciting, especially as they have been crafting it for over a year, day in and day out, in their studio in Denton, TX. The bits and pieces I've heard are delicious. Tim Smith, Eric Pulido, and McKenzie Smith answered my questions about their lyrics, their work ethic, and their new songs.

How did the members of Midlake all come together? Did you all meet at the University of North Texas, or had some of you played music together before?

McKenzie Smith: Four of us met in the fall of 1997 while attending the University of North Texas. We were studying jazz and were in a completely different head space musically, which is kind of funny to think about now. I had known Eric Pulido since high school but he had gone to a different university. He was actually our manager for a short time before we told him to buy an electric guitar, move to Denton, and join the band. That was December 2001. It has been us five ever since then.

You spend a lot of time crafting your albums. Can you talk about the process and how you keep up with such a rigorous schedule in the studio?

Eric Pulido: The process is an ever-changing thing, but Tim will usually bring demoed versions of songs he's written and then we will start working on them together to form and record. There's not really an equation to how it comes together, we just run the gamut of ideas/instrumentation/sounds until we feel the magic. I think that's what keeps us going -- knowing that we'll eventually get there.

What are some of the most favored pieces of gear in the Midlake studio?

McKenzie: It's taken us quite some time to piece together what we have now, which is not all that much compared to most studios. But we do have a few nice pieces that are great to work with and certainly help to make great records. We record on a system called RADAR. It functions more like an old tape machine in that it has a session controller with big buttons on, much like a tape machine controller. It feels like you are using an old IBM desktop computer or something, without the monitor. We really love the simplicity of it and how it enables us to record in a modern way (i.e. digitally) but has an organic feel to it. There is no monitor with squiggly lines going by or the ease of just 'fixing' everything in some fancy program. It's pretty cool. Oh, and it sounds really good, too. We also have a Distressor and a Fatso, both made by Empirical Labs, that we love and use all the time. We also have a few channels of Neve 1272s that get a lot of use. As far as microphones go, we love our Royer 122, our Neumann U87, Soundelux U99, Sennheiser 421s, and AKG C 414.

My favorite Midlake memory is listening to all of you singing along to America and Bread, with all of your gorgeous voices, when Tim was playing his iPod one night. It seems like you all love so much of the same music. Are your tastes very similar, and where do they diverge?

Eric: Thank you, Anna-Lynne, we must have been lip syncing! We do share a lot of the same musical tastes and have gone through several different phases together. Much of what we're listening to is an influence to the music we're making, so we really saturate ourselves in a style/era and inherently it comes out when writing and recording. As far as diverging, there are always guilty pleasures that everyone has (secretly or shared) but since I don't want to get anyone in trouble I'll just share my own... '80s dance!

When the band's sound shifted from jazz to indie rock, and later to folk, was that a response to all of the band members' tastes shifting, or more about Tim leaning toward a different kind of songwriting and bringing it into the studio?

McKenzie: Over time, all of our tastes have changed and grown quite a bit. It's natural, and I think very important for anybody, really. Tim is the musical visionary for the band, but we have all been quite happy following his lead and we have all worked hard to contribute and be a unified band that works together to get the music out that Tim writes. We all had to stop playing rock music like jazz music students, which took awhile, but now our jazz backgrounds are being used more and more in the way of improvisation on the new album. 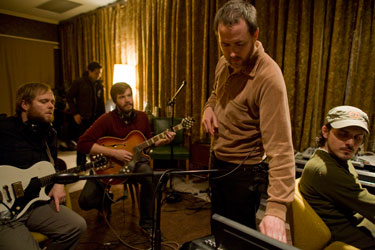 , a type of vocabulary and sensibility that predates modern music. Are there particular fables or folk stories that served as inspiration? Did you have a specific time period in mind for the scenes of the album?

Tim Smith: Well, I'm into paintings by Bruegel and the film Andrei Rublev by Tarkovsky. I'm sure some inspiration was gathered from these. Other than that there wasn't anything too specific that I can think of that influenced the feeling of the album.

How are you feeling about the new album and how close is it to being completed?

Eric: We all feel really good about the album and are looking forward to its completion. It's been a long year and a half, and hasn't come without its goods, bads, and uglies, but we feel like the time has done us well and we're ultimately better for it. It should be completed this summer and we'll have a firm release date at that time. That will be a glorious day.

Is it still slated to be called The Courage of Others

, and where did that name come from?

Tim: Yeah, "The Courage of Others" was a song I wrote after Occupanther was completed. It was intended to be used as a b-side, but after recording the first version of it we felt it should be on the next album, so we saved it. The lyrics start out: "I will never have the courage of others, I will not approach you at all, I was always taught to worry about things, all the many things you can't control." So, we had our title for the next album.

For the new album, did you collectively discuss as a band what direction you wanted to move in and what you wanted to do differently before you started writing, or did you wait to see where the album took you?

Tim: We started out recording the songs I'd been working on over the previous months. They were sounding all right and could've made the album except that our musical tastes were changing once again and we weren't satisfied. So new songs were written, different ways of playing (for us) were being figured out, and much conversation about the direction of the sound was had.

What other artists or art forms do you find inspiring your music lately?

Tim: The biggest influence on the new music has been bands like Fairport Convention, Steeleye Span, Jimmie Spheeris, Pentangle, Strawbs, The Incredible String Band, Amazing Blondel, Bread Love and Dreams, Black Sabbath, Sandy Denny, Yellow Autumn, Mellow Candle, John Renbourn, and many others. So I guess we got into more of this British folk thing and a 'fair maiden' thing as I call it, but I don't think we really sound like these bands, though there is more than a hint of it on the new album.

Eric, can you talk about the coffee company that you started in 2008 and the importance of fair trade?

Eric: I actually got involved with coffee accidentally. Robert Gomez, myself, and a couple others were going to start a bar/cafe here in Denton and it never quite got off the ground. In the process I met the people that were going to supply our coffee and I found out more about the cause they were involved with. The coffee is through an organization called Growers First (www.growersfirst.org) and they help coffee growing families in remote areas through fair payment, economic development, agricultural teaching, and more. On top of that, it tastes amazing and is freshly roasted every week with my friends at Halo Brand. People can check out my coffee at www.cappulido.com and pick up their own bag(s).

When I mentioned in passing on my Facebook page that I was in a cafe coming up with questions to ask Midlake, a few of my acquaintances chimed in with questions of their own and Midlake was kind enough to answer those as well.

Matt Borondy: Ask them what kind of coffee they like.

Eric: Cappulido of course! Sumatra for me.

Jesse Danger Landers: Ask them if they want to be my boyfriends.

Eric: Well, Jesse, considering we all have wives or girlfriends... yes! But it's going to have to be platonic...

Sarah Musi: Ask them what illustrator they would have do their album art if they could have anyone, living or dead.

Tim: I'm just not familiar enough with cover artists to say. We'll most likely do it ourselves again.

Richard Knox: Ask em why "Roscoe" is such a god damn good song.

McKenzie: Sometimes these things just happen. Tim is a great songwriter and we stumbled upon a nice rolling groove that the vocals sound really nice over. That song did the band a lot of good and I think we will always be proud to have that in our set list.