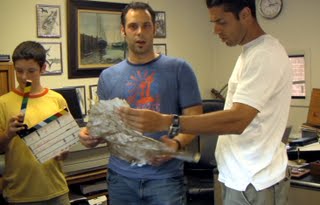 Within the independent film world, Christian-themed cinema has been a vibrant undercurrent that has been quietly growing for a number of years. One of the newest filmmakers within this genre is Judah Thomas, a worship pastor at Faith Living Church in Plantsville, Connecticut, who released his first film, “Treasure Seekers Inc. – The Tiger Eye.” This delightful family-friendly film sets down the foundation of an action/adventure series regarding the global search for missing artifacts.

To his credit, Thomas (seen in the center of the photograph, during the production of his film) did not go overboard in preaching the gospel online. Faith-affirming conversations and considerations are carefully planted without being intrusive, and in one case – an ingenious plot twist relating to the Psalms statement “lamp unto my feet” – it actually helps spin the story into an unexpected direction.

Identity Theory met with Thomas to discuss his foray into filmmaking and the state of Christian-themed films.

Q: What was the inspiration for “Treasure Seekers Inc.”?

Judah Thomas: My inspiration for this particular series was mostly from Indiana Jones. I always loved the Indiana Jones movies and I think that kids in general love the action that comes along with it. However, the movie was also greatly inspired from my personal love for the outdoors. I have been an avid backpacker and outdoor enthusiast, although having children of my own has slowed that down a bit.

Q: What was the challenge in putting faith-affirming messages into a film without making it come across as too preachy?

Judah Thomas: This was certainly a difficult challenge for me. Most of the “Christian” flicks out there are so preachy that the only person it would relate to is someone that believes exactly the same way. My goal was to make the movie accessible to everyone whether they full agree with the “faith” aspect or not. As a result, we tried to put the characters into situations that it would seem appropriate to bring up their faith, and then direct it towards the character and not towards the audience.

Q: How is this film being distributed, and what has reaction been to the film?

Judah Thomas: The film is currently being distributed to retailers nationally by Wesscott Marketing in St. Louis Park, Minnesota, and also on Amazon.com. The reaction to the film has been very positive, and I am already hearing stories of kids watching it on a regular basis!

Q: Will there be more films in this series? If so, can you offer any previews of what to expect?

Judah Thomas: I hope so! We already have the screenplay for the next one and I am hoping to begin shooting it later this year if everything goes well. We also have outlines for about three more episodes that we will continue writing based on the success of the current episode.

Q: As a pastor, how do you incorporate film and video into your theological work?

Judah Thomas: For over 10 years, I have been very inspired to mix film and faith. In fact, at the church that I work at we are regularly creating short video vignettes to be used to illustrate a particular aspect of a sermon. Also, my production company, MeatloafMedia, has been instrumental in distributing thousands of short downloadable videos across the US and abroad to be used by churches in their services.

Q: From your perspective, how would you categorize the state of today’s Christian-themed films?

Judah Thomas: It is getting better! Fortunately a few movies have come out in the past few years, beginning with “The Passion” and most recently “Fireproof,” that have really done well in the box office. As a result, Hollywood seems to be noticing and is beginning to fill up their slate with more “inspirational” and “faith based” films. Even with that, I think we still have a long way to go before we really see major-budget motion picture with a Christian theme.

Q: What other video projects are you working on?

Judah Thomas: “Treasure Seekers” was intended to be my debut into indie film making with the ultimate goal of making feature-length movies. We currently have three other movie projects in various stages of development. Unfortunately, I don’t have a firm date for completion on them as of yet, but I am hoping that we can begin production on the next major project within the next 12 months.

"Treasure Seekers Inc. - The Tiger Eye" can be found online at treasureseekersinc.com.