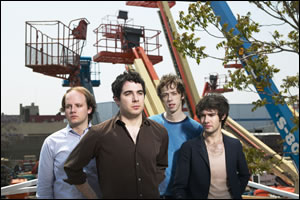 More than most records, your albums have a particular sound. By this, I don’t necessarily mean that the music itself has a sound--though it does--but that the actually recording quality seems to utilize unique frequencies, distortions and ambient noise. How do you engage yourself with this aspect of making music? Is it intentional? A by-product of the way you record? Does it happen at the production phase?

I think we're all pretty tweaky about sound in The Double. You can see our ears perk up when some bizarre buzz or something goes off in a room. So, there is a definite intentional push on our part to get those types of sounds in our songs. Sometimes when we are recording ourselves, we also try to use the limitations of our own meager recording gear and less-than-ideal recording environments to our advantage. Ambient noises and strange sounds in general tend to filter in all on their own. We enjoy this.

As far as how our sound palette affects our song writing, I think the two are rather intertwined. In the case of Palm Fronds

, especially, this was true. The sounds would sometimes create new parts for the song. Whereas on Loose in the Air

I think one can find more moments that sound like traditional "band in the practice space" song writing. Overdubs were then added for color and whatnot.

Are there any particular recording technologies throughout history that appeal to you? For instance, bands like the Climax Golden Twins have been known to experiment with the sound of Victrollas. Does the sound quality of vinyl or digital or analog based sounds all interest you?

I think we all embrace any technology that will help us get the sounds we want. For example, it's not as though we only use vintage tape delay. I like boss digital delay very much, even though it's often regarded as somehow inferior by music gear head types--they're dorks anyway. We've recorded digitally and on tape, as well. I don't know if I have a preference per se. I am interested to begin working again on the digital eight-track on our own. We chose not to use it for Loose in the Air, which was all recorded on tape/analogue gear. I think digital media can easily get a kind of "psychocandy" harshness--with even more refined high-end detail--that is really alluring.

On the other hand, it's a real pain in the ass to get good drum sounds on my digital eight track. Something about tape just makes that nice roomy warm drum sound you can hear on Plastic Ono Band recordings, or something.

We do like our dub music. I hope that comes through in our sound, although we avoid an actual dub style. I think we're conscious of the array of music we like and try to hybridize and solder those influences together in a novel way.

How would you draw your musical lineage? This doesn’t really have to correlate with influences at all. Obviously, most of the time, influences do not correspond with actual sound. But if you were to trace some sort of pattern throughout the last 50, 60, 100 years in music, up to yourself, what music do you think would be included?

I just can't think of what music doesn't influence me. All of early country, folk, blues and rock and roll, as well as traditional music from around the world and pre experimental classical are essential. So, pretty much everything up to the sixties (except Souza).

Starting in the sixties, The Beatles, Buffalo Springfield/Neil Young, the Kinks, the Who, Hendrix, and the Doors as well as about a million others all come mind. There is also stuff like Lamonte Young, Sun Ra, Alice Coltrane and Steve Reich that I think is very important to our lineage.

By the late sixties, bands like the Velvet Underground, The Stooges, Neu, Can and Silver Apples come into play. I guess this is where the gene pool of rock begins to break into a musical genus that we might really call ours, as far as how The Double sounds.

Past that: punk and post punk, as well as some contemporary electronic stuff, like Fennesz or Pan Sonic, have all had a big impact. This is all very abridged, though. There is so much I have left out. Further, I think it's good to keep in mind that we're four dudes, and I'm only one person writing this. Jacob might focus more on Hendrix or something, while David might mention Nina Simone or Yoko Ono, and Donald would include classical Indian ragas.

A rough guide to the last 100 years of music:

I guess I'll answer this one strictly for myself. I read a fair amount. I am obsessed with the news and try to read two newspapers a day. Any book could interest me. History is something I enjoy reading about when not reading novels. Soviet history has always been a big one for me. But, again, any subject could strike my fancy.

I was a painting major in college, so I love a gallery exhibit. I have stopped following the young scene the way I used to, so I'm a little out of touch. Luc Tuymans, Peter Saul, Charles Ray, David Hyde... These are all artists I like. The medieval armor exhibit at the Met blows my mind.

What do you think are the ideal scenarios for listening to music today? Concerts? Records? In the car? With headphones? Does any one of these scenarios capture something that you find to be essential to the listening of music? What are your thoughts on the timeless qualities of certain musics? Do you find that some technology has the ability to “date” music and disallow it to be appreciated as its own entity? If a music is inherently dependent on its technology, does that make it “dated”?

Technology, umm, I'm not sure. Matter of opinion, depending on whose ears you have, what ears your people have. I like in a car, headphones. I enjoy the emersion, the selfish soundtrack. Mostly, the ideal is LOUD.

About 100 years ago, recorded music came into existence. Before that, music existed ONLY as live music: music that could never be recreated a second time. With the invention of recorded sound media, music could forever forth be preserved, recreatable, and consumed mechanically.

We, The Double, enjoy a mixture of the old and the new, not a namby pamby best of both worlds, where we record on tape and dump it into pro tools: but a dichotomous extreme. The broken and the obsessively specific all at once. If I could play a clavichord from 200 years ago on the next Double record, I would, but I would also record a screaming noise filtered through a dusty Casio to go on top of the clavichord.

I would like to hope that the reason no one makes music like Robert Johnson now is because he was the one of a kind. His voice sounds urgent: if you could hear his guitar better, you might start shaking. It is true that the scratches, pops, and distortion of a Robert Johnson record create an ambience; and the way a microphone broke up then isn't going to happen now, but it's mostly due to popular tastes of the time. I think we like those backgrounds and pay homage to them in our music. But then again Howling Wolf supposedly sounded the same on any mic he sang on.

For future generations, I often wonder if anyone will play live music: where's the desire when someone else can make it for you? Buy land and CDs and go to a concert. Timeless is an illusion created by recorded media, and it is always dated, rooted in the history of the available and recreatable. This century, for me, has a lot to do with the old 100 years of recorded sounds played in contrasts and combinations that create something new. Sabath little pony. We mostly play music and try to explain later.

Visit The Double on MySpace.