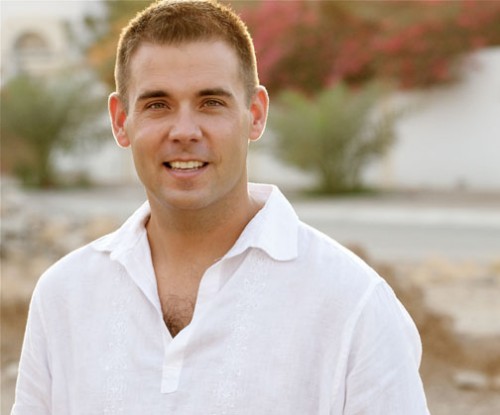 One Hundred and One Nights is his first novel.

Matt Borondy: I don't know. What do you think makes a good author interview?

Benjamin Buchholz: I like things a little wacky. So far, at least with regard to my recent interviews about ONE HUNDRED AND ONE NIGHTS, the focus has been on my personal experience in the village of Safwan and how that influenced the work. That tends to get tedious. Throughout the book there is a current of humor, of the bizarre, perhaps even the magical. We could have fun with that, in specific, and -- in terms of a general interview -- I think the reader would rather know about the gaffes, the behind-the-scenes chuckles, the inside jokes, that an author hopes translate into amusement and entertainment.

MB: So tell us about a humorous, magical gaffe that came about when writing this book. (If not, we'll settle for just any old gaffe...)

BB: I'll point out a couple such gaffes. First, the prop of the 'jack-in-the-box' used throughout the book. I had intended it, originally, as just a bit of serendipity, with the book's protag - Abu Saheeh - buying it for his daughter as a way to make amends for dragging her to Baghdad. The fact that he found a jack-in-the-box in war-torn downtown Baghdad was interesting enough, but then, when I was plotting him forward, moving him from the toy store to his house on a protected island in the middle of the Tigris, I realized it was about time for the evening call-to-prayer. Abu Saheeh hears the muezzin cry. He kneels and prays, setting the jack-in-the-box aside. When he rises, as a writer I forgot to have him pick up the jack-in-the-box. I had totally intended him to present the jack to his daughter in the scene. Instead, he reaches the gate for his housing enclave, realizes he doesn't have the jack-in-the-box, and returns to retrieve it. Because of this, and what happens next (which I'd like the reader to experience in the book, rather than revealing it here!) the jack becomes rather symbolic, maybe not even a "real" object in the role in which it is used in other parts of the narrative. The jack takes on the flavor of a gaffe because of the authorial plot mistake, maybe a gaffe that is now invisible to the reader but one where the serendipity, the strangeness of it, hopefully resonates. Second, Abu Saheeh ends up having an assistant work for him, the young and dapper Abd al-Rahim. I had intended Abd al-Rahim to come off as a bit sinister, but I realized that Abu Saheeh, an older character who is himself an outsider in the town of Safwan, would likely be hyper-aware and hyper-critical of the things that make Abd al-Rahim different from everyone else. Abu Saheeh would even take some amusement at the young man's attempts to 'fit-in'. As such, Abd al-Rahim's big-city, almost metrosexual side gets a lot of attention -- his highly-polished shoes, his perfect sunglasses, his clean clothes. While it establishes Abd al-Rahim's difference it also helps build some sympathy for him and makes his sinister aspects a little comedic.  Totally accidental and fun. From it, as an extension, Abd al-Rahim's mechanical disinclinations (he doesn't know how to use a hammer, or sweep a floor, or do any menial labor) emerged for me and took a major life of their own.  Another instance of lovely coincidence connects a point in the beginning of the book with the final scene, the scene that perhaps truly unravels Abu Saheeh. This happens when Layla, who is Abu Saheeh's unlikely young street rat friend from the market, steals a gun from a guard on the highway overpass, fires it, and returns it to the guard without the him ever knowing it. The bullet is the guard's only bullet. When Layla does this, which I meant originally only to show the guard's ineptitude and her prankster mentality, it gave me an opening to create a relationship between Abu Saheeh and the guard. Abu Saheeh supplies the man with bullets. And, in the end, the lack of the guard's bullet(s), either read truly or as a metaphor once again, is the real magic of the story, a young girl stealing and thereby defying the deadly trajectory that Abu Saheeh has set himself on. A final 'gaffe' occurred in the Arabic title for the story. I had always intended the title, in its Arabic version, to be a pun. The word for "night" in Arabic is layla. So, the title could be read "One Hundred and One Laylas" (which is a nice description for Abu Saheeh's haunted mentality!) But, there is yet another twist to the Arabic version. The words in Arabic are actually "One Hundred Nights and A Night." So, the first rendition of "Night" I have left in its actual spelling of "Night" with a Ta-marbuta "A" at the end of layl"a". Whereas, in the second instance of "Night" I change the spelling to an Alif Maksura "A" at the end, turning it into the proper name Layl"a". This yields an Arabic title much richer than the English version, quite literally "One Hundred Nights and Layla."

MB: Did you run into similar issues with character names?

BB: The character names all have some level of purpose to them. I think it is a wasted opportunity in fiction to chose meaningless character names. They should all say something about the character and thereby provide a deepening layer of allusion. This allusion might be sort of far-fetched but it is always there. In some cases I don't even remember the rationale of the choice but in other cases it sticks with me. The name "Annie" for the American woman Abu Saheeh falls in love with hearkens to Annie Oakley for me, something of a rebel spirit. She's a character who populates a lot of my fiction, the inexplicable dominant sea-change of the feminine. She doesn't appear in this novel at any great length but her presence is meant to contrast strongly with Nadia, the woman to whom Abu Saheeh had been betrothed as a child. Nadia might satisfy western desire for an exotic image, an oriental fantasy of what an Arabic woman should be, but for Abu Saheeh, she represents the normal and the average (and therefore, also, the boring) while Annie is the one who seems to Abu Saheeh, in her freedom and strength, exotic. Other names:  Mahmoud the guard, Layla the girl, Hussein the Hezbo'allah flunkie, Sayyid Abdullah, Abd al-Rahim. All of them have significance. The character Bashar, who is Abu Saheeh's long-time (but rather uneasy) friend, sticks out as another important name-choice. Bashar has a rather heroic connotation to it in Arabic. It was also the name of my best interpreter when I was working in Safwan. I think the character's slightly grudging but difficult choice to give up his wordly success in order to live quietly as a cafe-owner so that his family can have a safer life is, despite everything else, the sort of heroic choice that often gets overlooked in fiction or in real life. He gets caught up in and dragged down by Abu Saheeh's eventual unraveling but his choices are, all along, those of a family man.

MB: Was writing this book fun?

BB: Yeah, it was really fun. I wrote most of it during lunch breaks at the Defense Language Institute, while studying Arabic there. It helped me incorporate what I was learning during the day, helped me parse and situate the new language in my old, stultified brain better, and it helped me fire a few creative neurons that rote language learning wasn't utilizing. Maybe the most enjoyable moment, though, was when I was writing this absolutely crazy, trippy scene where Abu Saheeh dreams that all the other characters are something like fish, swimming in a dream around him. I was sitting at my dining room table with my little sister Lydia, who was, at that time, studying Farsi at DLI with me. I remember reading her the trippiest parts (some of which actually made it into the book, hanging together just enough in the narrative framework), not only did the scene include fish, or characters taking on fish-like properties, swimming, spouting, diving, but hieroglyphs and unicycles circled them, and this trippiness also involved a scene that morphed from pure dream into memory and back again, a scene that dealt with snow and with a little girl's mitten. A lot of fun. A lot of stream of consciousness that had to be tamed and shaped afterward. Fun to let it explode onto the page and then to pick up the bits and pieces that work, massage them, make them into something solid.