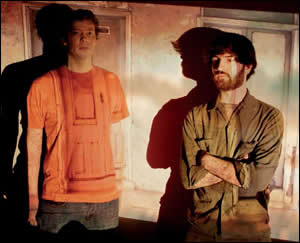 Listen to Belong on MySpace: http://www.myspace.com/belongmusic

TURK: I wouldn't use three words to describe it.

MIKE: Nobody wants to answer this question...but here's a pair: "blaring introversion."

TURK: I feel that the advancement of technology and the tools used to produce and record music has lead to the most interesting change. Anybody, with just a little money saved, can produce and record a quality album in their bedroom. This has lead to an extreme amount of crap, but it also has allowed other people with great ideas to realize them on their own without having to spend a ton of money. This couldn't be done 50 years ago.

TURK: Unfortunately, I am way more critical of music now, but it does still elicit a range of emotions like it did when I was younger. Sometimes I really wish I could listen to music without the critical ear.

MIKE: I'm not scared to listen to Slayer anymore.... I just choose not to.

MIKE: I hope nobody is as critical as I am.

5. What has been one the most important non-musical influences for you as an artist?

TURK: I'm sure this is the most common answer, but I am really influenced by film and my surroundings.

6. Where do you draw the line between music and non-music?

MIKE: After I consider the motives behind it being made......

7. If people used music as currency, what would a large pizza cost?

8. What is your most productive time of day for writing music?

TURK: For us, it is usually late at night. Before then my brain is usually mush.

9. What percentage of your musical ideas would you say end up coming to fruition?

TURK: A small percentage .... maybe 20-30%....If we could fully realize all our ideas, I don't think music would be fun anymore...The "try and fail" aspect of making records is what keeps things interesting.

MIKE: Judging by the amount of abandoned songs we have...less than half for sure.

10. What is the ideal circumstance for someone to hear your music?

MIKE: I'm not sure there is one ideal circumstance

TURK: Here are two circumstances (among many) that I think work well:

1. In your bedroom...lights off...eyes closed...blasting out of your Hi-Fi or under a really nice pair of headphones...listening to the record from start to finish as one piece.

2. Played super quietly in the background whilst trying to go to sleep.

11. Would you say that your most recent music represents more of a new direction for you, or a continued development of the same general aesthetic?

TURK: I think the stuff that we have been doing for the last three years has been a slow development/evolution of the same general aesthetic. I don't think you'll ever see us making a record like October Language one day and then a funk record the next.

MIKE: A continued development of the same aesthetic. We haven't made a decision to move in a new direction...I don't really have an interest in newness, or reinventing ourselves. Any movement in our sound will occur gradually as our tastes and interests shift.