In his eleventh and latest book, Dirt Road Home, Alexander Nader departs from his usual tales of demons and monsters to tell a story about finding home in an unexpected place. The contemporary young adult novel follows soon-to-be eighteen-year-old Logan as he begrudgingly moves from the metropolitan area of Detroit, MI to the rural town of Pigeon Forge, TN with his mother and younger brother. Through his passion for working on cars, he meets new people who challenge his assumptions about the area and finds a new sense of belonging.

In our conversation, we spoke about transitioning to a new genre, developing his voice as a writer, the concept of a chosen family and more.

August Barham: How are you feeling now that Dirt Road Home has officially released?

Alexander Nader: I am the most anxious I have been for a book release since my first book like 10 years ago.

I normally write in the urban fantasy genre, so there is lots of action, and demons, and monsters and all of this stuff going on. This book was very much not that, so seeing if I can make the transition from one genre to a totally different genre has me very on edge.

AB: What made you want to tell a different type of story now?

AN: Dirt Road Home started as a writing prompt from some long-gone website.

I started writing it just as a word prompt. Every once and a while I will do flash fiction to kind of cleanse the palate, and I try to do something totally different just to reset my brain. I did this totally different thing, and it felt really good. I was like, “Wow, I like this,” and just kept going, and it became the whole novel. That's where it came from.

AB: What was the timeline of getting Dirt Road Home out there?

AN: This was my longest journey for a single book.

There was so much of me in the book that I wanted to make sure it got done justice. I was very picky about the agents and publishers that I queried with it. I wanted it to be in the hands of someone who I thought really believed in the story, and I couldn't find anyone.

I finished it relatively quickly—probably five years ago—and I couldn't find it a home. So, I sat on it. Then, there was a one of the Twitter pitches they do where people get on and pitch their book. I was like, “I'll dust this one off and I'll pitch it and see if anything comes up.” Winding Road Stories liked it, and so I sent them a full query and they read the manuscript. Michael (Dolan) with Winding Road called me up and said he wanted to publish the story.

Everything that I really hoped a reader would get from the story, he got and repeated back to me. He was very excited about the story, and that enthusiasm is what made me realize that it had found a home—and now here we are.

AB: What was the process of deciding how much of yourself you wanted to share with readers and what you wanted to pull back and create?

I had the story that I wanted to tell, and when I saw opportunities for things that I had experienced that I thought might be impactful, I tried to work it in. But there was not a whole lot of, “These milestones happened in my life, and I really want to incorporate XYZ.” There was no outline for the novel—it was straight, on the fly—but if something fit, I used it. 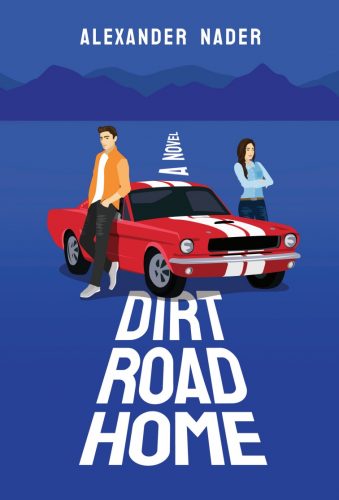 AB: I was really carried through Dirt Road Home by this strong, distinct, and identifiable voice. Could you describe your process of developing that voice?

AN: It took just a lot of really bad writing.

My first few novels I wrote how I thought books were supposed to sound, and it came out really bad. The story in my head was cool, but it just was not executed well, and I got a lot of rejections from them. Finally, I sat down to write another novel, and I was like, “You know what, I am doing this how I want to do it, how I want it to sound.” That is how I found my voice, which I have more or less been crafting for seven or eight years now.

AB: How much of the book is your voice as an author versus Logan's voice as a character?

AB: I enjoyed the little cultural references throughout the book. Was that something that came naturally for you or something that you saw in Logan specifically?

AN: That's another me thing.

I definitely spent some time like, “Did the song come out? Would he know about this?” But I personally am influenced by a lot of music, and a lot of books and a lot of movies. Referencing those or sneaky little tie-ins to those is my way of paying homage to what got me here. It is something that is pretty consistent among most of my stories. If you are a big pop culture geek, you will probably catch a lot of little things.

AB: Cars are another major aspect of the book and the way that Logan communicates with and connects with a lot of the other characters. Besides your clear passion for them, what about cars made them such an effective device in this story?

AN: It just felt like something that could connect two totally different groups of people.

Whether you're a kid in Detroit or you're a redneck in Tennessee, a motor’s a motor. And the characters can use that as a common ground to find other common interests.

AB: As we have mentioned, Dirt Road Home is set in the South, as are many of your novels. What about the region do you find inspiring as a writer?

AN: I think this area—for all of its flaws—is very special.

It is obviously where I know best, I have lived here since I was 10. I may have been born somewhere else, but I grew up here. It is very comfortable for me to not have to write somewhere else and be like, “Do they say that word there?” I can focus more on the story I want to tell and not deciding if everything fits culturally with the area that I am writing in. So that drives a lot of it.

AB: Dirt Road Home is all about finding home and finding family in untraditional forms and places. What about that concept was compelling to you?

AN: Very much like Logan, I found someone here who made me realize that family is what you make it.

My Leah and I have been together since we were 16 years old, so almost 20 years. We found our family here. But the “These people might not be related to me, but these are the people I choose to call my home”—that aspect of the book is very powerful for me.

AB: I really enjoyed the book and could ask a bunch of super specific, spoiler-heavy questions, but I will let people read it and experience it for themselves. But, is there anything else you would like to say that we have not gotten to?

AN: I really hope everyone loves the story as much as I do—for the parts of it that I did and did not live.

Now, I just hope people can find it and have a good time.

August Barham is a freelance writer based in the D.C. area. She received a BA in journalism with a minor in cinema studies from American University in 2022. Her work has been featured in multiple publications including Gargoyle Magazine, The American University literary magazine, AmLit, Her Campus and more.