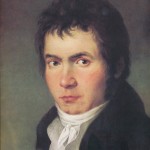 While the title of Phil Grabsky's latest documentary may suggest a focus on the life of Ludwig van Beethoven, the focus is primarily on the music. Or, to be more precise, on snippets of the composer’s vast output.

The mystery of Beethoven’s life, as glimpsed here in brief slices, was one of profound sadness – an artist who was more than aware of his genius, he was nonetheless isolated from his Viennese surroundings due to the deterioration (and eventual disappearance) of his hearing coupled with his inability to find love among the aristocratic women who did not view him as their social equal. It is no surprise that his work was complex and often thunderous – this was not a man who lived a musical comedy life.

But Grabsky’s film puts far more focus on a Wikipedia-shallow explanation of the composer’s various compositions. A number of conductors, musicians and historians turn up to give the briefest of explanations on the importance of selected creations. Of course, the film cannot give its running time to a complete performance – but the overload of portions creates a work that is (to pardon a culinary analogy) all appetizers and no main course.

Still, this is a handsomely produced documentary, and the music that does get on screen (including a brief view of Beethoven’s only opera, “Fidelio”) is vigorous and often startling. Perhaps Grabsky can return to the subject by offering an entire film explaining the depth and scope of a specific work – particularly the “Fifth Symphony,” which is given but a few minutes here.