When anyone asks me what I do (though I can't remember
the last time I was in the company of any strangers—that would
be people I don't know—so thoroughly American), I now will
answer solemnly, "I am a Revisionist Historian."

I am still working out the job description, but a portion of my
responsibilities will be trying to decide which list is longer,
the list of things that I do care about or the list of things that
I don't care about. Since reading the Washington Post (or
claiming to) is a mainstay of a revisionist historian's media canon,
I noticed that Peter
Carlson has written a well-conceived trashing of the ubiquitous
journalistic gambit of list making and its creatively challenged
practitioners.

Undeterred, I plodded on determined to rid myself of the bile that
has been building up as the assault of all that is irrelevant to
me starts to pound my senses and sensibilities …

I don't care about Hilary Clinton or whatever sales records her
book is setting. I don't even care what she has to say about her
life. And less (than zero) about anything she and Barbara Walters
harmonized about. I do believe my skepticism about her intentions
about having her name on a book is warranted. Somehow I think a
proximal relationship to the concept of 'truth' is what is intended.

I don't care about Harry Potter (whichever volume this
is) or that someone stole nearly eight thousand copies or that a
bazillion copies have been pre-sold. Or that Harry has a new mark
on his face.

I don't care about RADAR magazine or Maer Rohan or what a nice
guy he is.

I never cared about who was going to design for the space that
was once the World Trade Center towers.

Jayson Blair and Stephen Glass, who cares? I don't. Two callous
young twits who are best left to the care of their families, who
are no doubt responsible for their minor (so far) sociopathies.
That's correct, blame the families.

When Bob Woodward wrote in the instant-neo-faux-quasi classic Bush
at War that Condoleezza Rice went for a ride with The President
and Bob in US Pickup Truck Number 1, at the President's ranch, and
never got out for a stroll because she didn't have the right shoes,
I was titillated.

I don't care about Howell Raines' demise, and the office pool about
who succeeds him is a big yawn. I do have a copy of the 1969 Pulitzer
Prize winner's second book, a novel, Whiskey Man, that
I will let go for an ample sum or to a good home.

I don't care about Charles Moose.

I don’t at the moment think about whether bloggers are saving
the world though I am sensing a drumbeat for this messianic ambition
in the blogging world. I could change my mind about this especially
if someone coined a new word for the web-logging thing.

I wish I didn't care about Roger Clemens getting his 300th or whether
Sammy Sosa used a corked bat. But, I do. Oh well.

I don't care that there are nine Democratic presidential hopefuls
(a word almost totally devoid of meaning); in fact, I would wager
there are more than nine democratic presidential candidates. I might
care about those if some Wizard of News wasn't already defining
the story as some version of the seven dwarves.

And as for the 'triumphalist babbits' (that's what Robert Stone
calls them) that are in power in the US government, I continue to
wonder how they came upon such a low regard for the citizens of
this country and what it will take for those citizens to awaken
to the cynical arrogance of their government.

Luckily, this week what I did care about was Tom Franklin's excellent
new novel, Hell at the Breech and Arthur Kempton's masterpiece
of musical history, Bugaloo. And Russ
Smith's idea that there be a magazine called Obituary
is the best idea I have heard all week. Maybe there is still life
in the old magazine concept. Do you think? 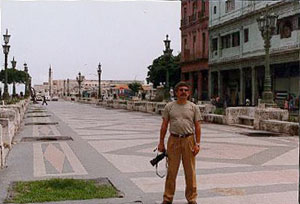