Summer reading as a category seems to me to be as
legitimate as greeting-card holidays like Valentine's and Mother's
Day. Graybeard Norman Mailer had it right when he was asked about
his summer reading, "I read all year around." Despite
this sensibility, that one would hope is shared by at least a few
people, some cultural lighthouses insist on propagating this summer
reading list contrivance. On the other hand, joyful exhibition--"Hey,
look what I'm reading!"--is not a terrible motivation to get
a list on the page, especially for a scribbler who is an enthusiastic
reader. Or in the case of John Powers' list
of influential books, a chance to fulminate on what it all means.
Though not quite the provocative snapshots that Gore Vidal and later
Anthony Lane exhibited with their analyses of the New York Times
bestseller's lists. Here
are the titles on Powers' list (of which I read 1 and 1/2, Bush
at War and half of the Of Paradise and Power).

The
New York Times
Summer (recommended reading) list contains seventy three titles
on its fiction list (it must count for integrity not to reach for
a low round number with some cliched headline, "The Hot, Hot,
Hot 50 Beach Must-reads.") There was something that did confuse
me about this list though. I distinctly remember some of the books
being given less than positive reviews. Well, who knows? Or cares?

Anyway, I was looking over what I had read in toto
this year, to date (that is, all the books that I read all of).
And I am surprised, in a way, that I found so many of them worth
recommending to the bookish of my world:

MAN EATER - Ray Shannon - a high spirited crime story set in Hollywood
with well crafted characters (A black ex-con with a screen play,
a smart and tough woman film producer, a sociopathic drug dealer)
that play out the absurdities of America's adult sandbox.

YOGA FOR PEOPLE TOO LAZY TO DO IT - Geoff Dyer - a minor masterpiece
in digression by one those young British writers (I think also of
Alain de Botton) who actually put ideas in one's visual field like
the famous image of a philosopher contemplating a human skull. Ruminations
on the Burning Man festival, Roman ruins, New Orleans, a Detroit
Rave festival and more.

A MEMORY OF WAR - Frederick Busch - a middle aged psychoanalyst
heads for the weeds with a young attractive patient and a man who
claims to be his step brother while his own marriage does its own
fade to black. Fred Busch is a sturdy and dependable writer and
good storyteller who, I have a feeling, has not written a bad book.

SOUL CIRCUS - George Pelecanos - Like that great Staples Singers'
song of the '70s, Pelecanos takes you there. 'There' being the mean
streets of DC's urban ghetto of drug dealing and gang turf.

LOST IN AMERICA - Sherwin Nuland - Yale-educated, Bronx-born Shep
Nuland looks at his youth and his relationship. If emotional weight
were quantifiable, this slender tome should come equipped with wheels.

I SHOULD BE PLEASED TO BE IN YOUR COMPANY - Brian Hall - A novel
about the Lewis and Clark expedition that manages the difficult
task of keeping the reader in suspense on matters one already "knows"
the outcome of and maintains the sense of novelty and excitement
of discovery and exploration.

UNDER THE SKIN - James Carlos Blake - Mexico and Texas around the
time of Pancho Villa by the author of In A Rogue's Blood
and a few other novels of the mythic American past.

DORIAN - Will Self - With dazzling intention and taut execution,
Self recasts the Wilde fable The Picture of Dorian Gray
in late 20th century Anglo American celebrity culture.

DROP CITY- TC Boyle - Back to the '60s and its smorgasbord of
new ideas, old ideas on drugs, drugs, communes, sex unleashed and
anthemic pop music realized in the hands of the precise Tom Boyle.

THE DEVIL AND THE WHITE CITY - Erik Larsen - A serial murderer's
story runs parallel to the construction and duration of the World's
Fair in Chicago in 1892. This book is well researched and well written
and the parallels and counterpoints Larsen emphasizes make the two
divergent stories part of a greater whole.

THE COFFEE TRADER - David Liss - Seventeenth Century Amsterdam,
exiled Jews, a blossoming stock exchange and an esoteric commodity--coffee--combine
to form the elements of this clever novel that centers on one trader's
plan to extricate himself from the brink of ruin.

HARVARD AND THE UNABOMBER - Alton Chase - An intellectual history
of post-WWII America as embodied in the life and education of Ted
Kaczynski, Chase has done good research and thinking to put forward
a thesis of "A Culture of Despair." Read it and weep.

GOD'S COUNTRY and WATERSHED - Percival Everett - Everett's most
recent novel, Erasure, is on my required reading list after
these two novels. God's Country takes on the mythology
of the America West and Watershed shines a harsh (yet still
darkly humorous) light on American notions of social justice against
the back drop of a Wounded Knee-like Indian reservation siege.

A SHIP MADE OF PAPER - Scott Spencer and WHAT I LOVED - Siri Hustvedt
- are two ruminations on love that couldn't be more different. A
white Manhattan lawyer flees the big bad city and moves back to
his small New York State home town and falls in love with a married
black woman. In Hustvedt's novel an aging art historian in Manhattan,
recounts his marriage and the tragic and intertwined events and
relationship with his painter friend's marriage and …

BAY OF SOULS - Robert Stone - I read it twice. A Midwestern university
professor begins an affair with a colleague that takes him to the
other worldly Caribbean of voudon, drug smuggling and post-colonial
intrigue.

SHUTTER ISLAND - Dennis Lehane - Young crime story master Lehane
pulls off the good trick of maintaining suspense in this novel that
takes place at a state hospital for the criminally insane located
on an island in Boston Harbor in the early '50s, just before a major
hurricane.

EVERYTHING IS ILLUMINATED - Jonathan Safran Foer - I liked when
Arthur Phillips did it in Prague, that is, as a side story,
fabricate a fictional history of a Hungarian family. And Foer's
effort is a central part of his novel of discovery as a character
of the same name looks back into his family's history.

GOOD FAITH - Jane Smiley - The '80's rendered humorously through
the machinations and ambitions of a group of small town real estate
operators. Wry, nimble exposition with sympathetic characters and
a look at the ramping up of materialism in America without a catalogue
of brand names.

THE LIGHT OF DAY - Graham Swift - A day in the life of an every
man on the anniversary of the crime his imprisoned lover has committed.
A subtle and melancholy meditation.

MONEYBALL - Michael Lewis - Here's a smart book about baseball
mostly because Lewis has turned his writing skills to accounting
for the success of one of the games' great debunkers of conventional
wisdom, Billy Beane of the Oakland Athletics.

GAME TIME - Roger Angell - A collection of twenty-nine pieces from
the length of Angell's considerable career of forty years of writing
about baseball for the New Yorker. Unpretentious, articulate,
humane and un-nostalgic. This is not a book to be read cover-to-cover
but savored over a season--but that's just me.

Judging from the publisher's lists for the rest for the year I
am feeling the joy of a radiant future--more wonderful books, stories
and public discourse get better from a very hopeful and decent start.
But then again things (me) change…back to reading Charlie
Smith's Canaan. What ever happened to him? 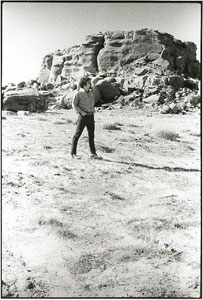