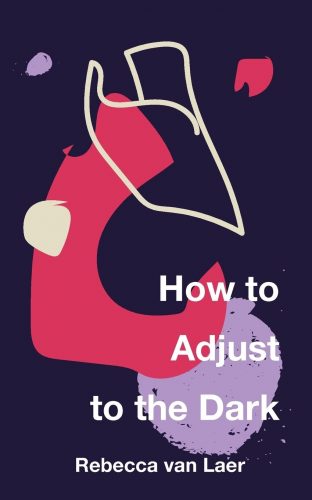 A literary bildungsroman of sorts, Rebecca van Laer’s How to Adjust to the Dark brings us Charlotte, an “ex-poet” who, over the course of the novel, revisits the poetry she wrote as an undergraduate and the destructive relationships and traumas which inspired them. By interweaving poetry, narrative fiction, and critical theory, van Laer crafts such an authentic experience that the novel often feels like a memoir. It’s a short book, but a rich one—wrestling as it does with how suffering relates to art, how we frame and re-frame our own stories to make meaning from experience, and how we try to make peace with the ambitions of our younger selves.

Van Laer consults a number of influential texts from the likes of Barthes, Freud, and De Man, deftly clarifying dense theories without any pretense or academic prudishness. Yet, it is Foucault’s Technologies of the Self which contextualizes the novel, providing the impetus for Charlotte’s excavation of her past.

After she gave up on poetry, she delved into the world of “self-care in some of its more consumerist guises.” She tried yoga, binge-watched The Bachelorette, ate the latest superfoods and bought the latest organic cosmetics. None of it offered her true solace. Instead, she now turns to Foucault’s “care of the self,” particularly using writing and self-analysis, not merely to know herself, but to reclaim and reshape her own power in order “to live more freely within the larger structures of power that are inescapable.”

The power structures that young Charlotte confronts and the ways she exerts and cedes power are completely recognizable, especially to anyone who has gone through a creative writing program. Delivered with some dry humor, there’s a subtle indictment of academia here (though Van Laer rightfully falls short of full confrontation): Charlotte competes to get into the best classes with the best professors whose opinions at the workshop table are, for better or worse, the only ones that matter. She abandons her novel-in-verse because one professor is “unimpressed” and Charlotte had never been taught to have authority over her own work.  Internalizing the adage to “write what you know,” she, at one point, turns to her childhood in Georgia as a subject simply because she thinks her peers will find the South romantic. Then there is the hermetic quality of such programs which, she admits, “do not teach tenacity”: they may teach one to write better poetry (or only certain poems, if you want to be cynical), but not necessarily how to be or remain a Poet.

Charlotte, like many young women in their flailing 20s, mistakes suffering for the only valid subject for art. “Poet” is an esteemed identity, one which allows her “an anchor for creating a sense of self” and gives her “power and purpose.” She wears this identity like a costume at first. When one friend jokingly points to Charlotte’s “whole Betty Draper thing,” she confesses that she’d hoped her “vintage dresses and sad poems were more of a Sylvia Plath thing, but what’s the difference really?”

The debt to Plath is palpable in the poems (as it might be in any number of undergraduate lyrics): there is a sense of some violence having had happened, some loss of power that writing the poem hopes to restore. In her work, Charlotte figures herself as Little Red Riding Hood, the Little Mermaid, Dorothy Gale, a porcelain doll, a hooked fish. (She even writes a fragment where she calls “I, I, I” out of a window in an obvious mimicry of Plath’s “Ich, Ich, Ich.”) Suffering provides her with her greatest inspiration. And how does a 20-something suffer? Through love, of course.

How Charlotte navigates relationships with men, guides nearly all of the poems collected here. Nowhere is her power as a college-aged woman more tenuous or more alluring to her. She exerts her power as an object of desire and changes herself at the first hint of rejection. She sees sex as the surest expression of love and acceptance, desire and desirability as her weapons. And while she thinks she wants love, she seems only to seek annihilation.

In “This Weight,” Charlotte writes with Catherine of Siena’s voice:

made a sacred shape

as He stared through me,

into the pit, the parcel at the center

but also loved me

this weight is His, and my own.

Written as a kind of exercise alongside her celibate Christian boyfriend, the poem concentrates on the ascetic’s ecstatic communion with Christ, the literal giving of one’s imperfect body to a perfect love. In the older Charlotte’s analysis of the poem, she defends the overt theme of annihilation, noting “St. Catherine’s position of absolute devotion is also one of empowerment; in giving herself willingly to Him, she affirms her own will.”

Yet Charlotte’s relationships seem to diminish rather than empower her, and her love interests are far from Christ-like. She is drawn, after all, to men who are “sad but interesting,” usually other writers who either view her as competition or as merely useful to their own writing aims. These men are painted so accurately that it’s shocking not one of them has a dog-eared copy of Bukowski on the nightstand (though one does decorate his room with Christmas lights). None of them have names.

And while poetry allowed Charlotte some semblance of power in her formative years, she confesses that it also “enabled me to romanticize the worst relationships I had ever been in, to prolong the pain in order to produce verse.” She transforms her habits and her body to please her lovers, enters into dangerous situations willingly, and falls deeper into depression all for the sake of mining poetic subjects.  When one particularly traumatic relationship ends and she begins to lose her “hard-won identity as a Poetess,” we see how fully she’s ceded her power to outside forces. In surrendering her power, she has not won perfect love like St. Catherine, only heartbreak.

This approach of writing poems that make pain too precious is one which Van Laer suggests is perhaps especially imposed upon women. Poetry had been her way to “divert and perform pain,” yet when that pain no longer serves her art or her sense of self, when the desire for painful experiences is no longer an ironic quirk but a whole way of being, the result is unsustainable. For Charlotte, who can no longer even write a birthday card greeting, undertaking the Foucauldian charge to transform herself through her past is a painful but necessary one.

Writing the novel, then, is an act of bravery. Instead of hiding this part of her life, she enters it, seeking to “make all of it useful again,” everything that led her to this moment of believing she is powerless and “no one”:

…I thought for a while I was going inwards, uncovering layer after layer of belief and personality and trope and meaning. And I thought when I got to the end, I’d learn some kind of truth about myself….I did learn something. I wanted to destroy everything that made those poems possible. Everything I was taught about what it means to be a writer, an artist, and a woman. Everything I was told about what it means to be traumatized, and depressed, and diagnosed. None of these beliefs made me happy—they just made poems. And knots in my chest, my calves, the back of my throat.

That’s the real point to mourn—not the loss of love or even of artistic practice, but the abandonment of the generative, meaning-making self to the larger power structures that dictate success and fulfilment.

So, how does one “adjust to the dark”? How does a poet remain a poet? If one isn’t actively producing and publishing, are they truly a poet? How does an artist sustain the often painful experience of confronting the world in the attentive ways that art mandates? How does a poet achieve the perfect alchemy of personal experience and universality that poetry demands but doesn’t promise? There is no answer here except perhaps to “keep insisting on it.” The artist must learn to persist—beyond the professors, the workshop tables, the boyfriends, the heartbreak, there is also joy to be had. And if young Charlotte was unable to move beyond herself into some greater joy, older Charlotte is finding a way.

Meghan Curley has an MA and an MLS. An ex-adjunct professor of writing and literature, she writes, reads, and makes things by the beach in New York where she lives with her husband and daughter.