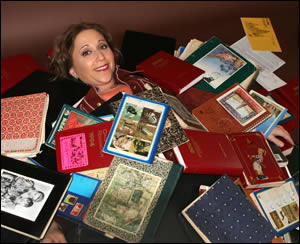 Hillary Carlip makes me feel lazy. Sure, we're both editors of popular literary websites. (Her site, Fresh Yarn, receives like a million hits a month and describes itself as “Part literary publication, part virtual spoken-word, all personal essays.”) But I've certainly never eaten fire on the Gong Show, appeared in an '80s movie with Tom Hanks, started a all-girl band, done commentary for NPR, designed websites for Jennifer Aniston, baked bread for Carly Simon, or done film-script rewrites for Disney. All of which (and much more) are accomplishments of the one and only Hillary Carlip, who details those events and more in her offbeat memoir, Queen of the Oddballs: And Other True Stories from a Life Unaccording to Plan (HarperCollins, May 2006).

You've dedicated quite a bit of your life to publishing other people's personal essays, between your Girl Power book and your Fresh Yarn website and other places. What motivates you to help so many people tell their stories? What have you found to be most rewarding about your stint as a publisher?

I know how important writing has been for me. Especially growing up -- it was like a tool for survival. Since I experienced first-hand how powerful (and fulfilling) creative self-expression can be, I want to do everything I can to encourage and support others in expressing themselves. It's been incredibly rewarding to hear stories of how writing has helped someone, AS WELL as hearing from the readers who have been inspired.

How did your experience in working with other people's personal stories help you to learn about yourself and develop this memoir?

The more you immerse yourself in the genre you're writing in, the more it can inform your own writing. I've learned so much about memoir writing just from reading and editing hundreds of personal essays for FRESH YARN, and paying attention to what works and doesn't.

What makes a good memoir?

A really unique story, that’s interesting and moving -- but as different and unusual the circumstances are, there are still universal themes running through that make the story relatable.

Why do you think the genre has been increasing in popularity lately?

Maybe since we can’t really trust what’s going on out in the world right now, people are looking more inward for answers. Into themselves AND others.

You've definitely had a full life, between your activism and writing and music and film and web design--not to mention baking bread for your "friend" Carly Simon. With so much going on in your life and seemingly so much still to come, how did you decide that now was the time to write your memoir?

I've always let myself be guided and do what occurs to me -- that's a lot of what Queen of the Oddballs is about -- letting myself do things unaccording to plan. So just like when I decided to start an all-girl, all ex-con band, or learn how to eat fire, it just felt like it was time to write my memoir.

What sort of space does music take up in your life these days? Can we expect your novelty band (Angel and the Reruns) to make a massively belated comeback (maybe in Bachelor Party 7)?

Well, we did just finally release our first full-length CD (available at
CDBaby.com!) so a reunion tour can’t be too far behind!

As a 15-year-old you used to memorize Zen quotes and call them to mind during stressful times (when, for instance, your brother freaks because the FBI is "after him"). Does the Zen worldview still resonate with you? Are there any philosophies that you strongly identify with or that inform your oddballness?

I say something in the King Case chapter in Queen of the Oddballs about thanking all the forces at my spiritual buffet. Zen still resonates with me, as do many other UN-organized religions and philosophies. What informs my oddballness is a combo platter of philosophies, having to do with fully embracing who we are, and going for life fully within that. I always felt like an outsider but instead of feeling ashamed of it, or feeling separate or alone, I decided early on to go for it fully. To not only embrace it, but celebrate my oddballness.

Being an oddball seems dependent upon one's surroundings—a hippie, for instance, would seem like an oddball at the RNC but not so much at a Phish concert. Do you ever find yourself in crowds where you feel like the straight-edge, normal one? Or is your definition of oddballness based entirely on the idea that everyone is odd in her own way and that you are more able to run with your oddballness instead of conforming to your surroundings?

There are some lyrics to a Bangles song, written by Jules Shear, that really says it all for me.

“Some have a style they work hard to refine so they walk a crooked line
But she won’t understand why anyone would have to try
To walk a line when they could fly.”

You've been an activist since a very young age and volunteered for John Kerry's Ohio campaign in 2004. What do you think about the recent assertions (by RFK, Jr., and others) that the Ohio election was stolen? Who would you like to see run on the Democratic ticket in '08?

I'd put nothing past the current administration. And why not pick a candidate right out of Queen of the Oddballs?  Ex-Gong Show host, Chuck Barris! With his autobiographical tell-all book, and subsequent movie, Confessions of a Dangerous Mind, where he details going from bumbling game show host to CIA assassin, he's certainly a more convincing liar than our current president.

Chuck Barris would be a great choice for president. Maybe you can be his running mate...