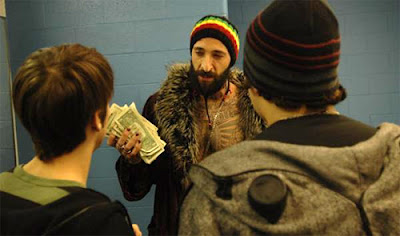 When a straight-A student named Henry (Matt Bush) smokes his first doobie only to find out that his school’s starting mandatory drug testing the next day, he’s left with only one choice: to get the entire school to fail that test.

When you go see a movie with a really ‘pitchable’ premise, you always run the risk of watching something that doesn’t live up to its potential. Perhaps the filmmaker just rested on his laurels or maybe investors paid for the film without bothering to read the script. I’m positive that most teen slasher flicks fall into this category. That’s why it was a relief when John Stalberg’s soon to be stoner-classic turned out to be funny, really funny.

According to the director, the script’s jokes were enough to hook Academy Award-winner Adrien Brody (The Pianist) to immediately sign on. Brody plays Psycho Ed, a tattoo-covered drug dealer who, along with his friends Hippie Dude and Paranoid, serves as one half of the film’s antagonistic force. I’m not giving anything away by saying that when you take something from Psycho Ed, Psycho Ed’s going to want it back.

The other half comes from Henry’s school principal, Mr. Gordon (who’s played by an almost unrecognizable Michael Chiklis), who instates the drug tests as a way to weed out the miscreants. So with a disgruntled drug dealer and a pissed off principal coming after him, Henry and Travis (Sean Marquette), his back-in-the-day buddy who gets him into this whole mess, have to act fast to avoid getting murdered, or even worse, expelled.

Stuffed with a talented ensemble cast (Julia Ling, Colin Hanks, and Andrew Wilson, just to name a few), HIGH School heads out of the gate at full speed with a Phucing funny opening scene and doesn’t stop making the audience laugh until half way through the ending credits. This movie isn’t rocket science. It isn’t even Rocket Science. It’s an over-the-top stoner comedy that would probably be even funnier after a few bong hits. I mean, come on, it’s called HIGH School.