I have the privilege of teaching post-secondary film studies, which grants me the ability to repeatedly view works. I teach genre film, and my specialty in the crime genres has me returning to Howard Hawks' Scarface, not the first of the 1930s gangster classics but the most realized and enjoyable. We've heard professors distinguish the classics from the rest: the former reveals new elements with every reading or viewing. (Hamlet, that deep source of philosophy, intrigue, and carnality, is the category's undisputed champ.) I'd argue the same for many popular works, and the original Scarface is no exception. 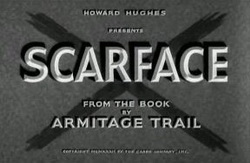 X Marks the Spot, from the start.

At the birth of serious film criticism, Robin Wood (1931-2009) first took Hitchcock (1965, revisited in 1989) then Howard Hawks (1968) seriously by publishing monographs on each. His project on Hitchcock began with an essay on Psycho, at first rejected by Sight and Sound for taking a prankster project seriously, then welcomed and translated by the French pioneering journal, Cahiers du Cinéma. Both book-length studies were entering fresh territory. Before Wood, the tradition of cinema laid mostly unexplored, save for journalistic criticism and occasional extended works. Wood applied to film the New Criticism approach that he learned at University, as did many English majors in mid-century Britain and America. His readings of Hitchcock and Hawks shows an close eye for ideas and leitmotifs. After coming out as gay, Wood turned politically charged though keeping the tone of his humanist works. Many note the influence of critic Andrew Britton, a former student of Wood's who'd become his mentor's mentor, as integral to Wood's development. Britton, whose works have resurged thanks to a recent collection (edited by Barry Keith Grant and with an introduction by Wood), was an outright theory junkie, a rewarding author to readers who can heft his boulders of argument.

In Wood's essay on Scarface, from the Hawks text and also collected in Silver and Ursini's excellent collection The Gangster Film Reader, the author discusses the film's tendency to reveal crime as the work of innocents. Morality doesn't have much of a presence (even if the coppers had to get the baddies by the end), while the namesake gangster, Tony Camonte, gets some sympathetic treatment. 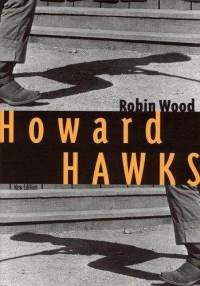 Reissued by Wayne State UP.

Wood notes the motif of X marking the spot of each hit by Tony, a visual cue that reveals Christian imagery as profane. When the film recreates the St. Valentine's Day Massacre, Hawks frames a row of Xs in scaffolding before the victims are forced by hoods dressed as cops to face the wall take a storm of Tommy-gun bullets. The critic rightfully spots the row in the scaffolding, to which Hawks' camera returns after the killing, to underscore the many hits committed on order by Tony. On my recent viewing I noticed how this scene precedes another visual motif of a row. Later, when Tony's sideman, Guino, is visited by the former's sister, Guino has cut out a row of paper dolls. The sister, Ceska, uses the dolls to come on to Guino, which he resists to show allegiance to Tony. When she notes that her brother will be away for a month, the scene ends to begin her and Guino's marriage. Ironically recalling the scaffolding, the row of dolls signifies Guino's choice to marry and build a family, an institution absent from the self-serving criminals and cops of the film. The row of dolls are, in fact, paper thin, since Tony, with incestuous leanings toward his sister, kills his buddy after learning of their involvement (he tragically didn't realizes they were married). Wood later saw marriage and the tradition family unit as a means to contain male and female energy, essentially resulting in displaced neurosis. (See his essay, “The American Family Comedy: From Meet Me in St. Louis to Texas Chain Saw Massacre,” in Wide Angle 2, 1979.) Meanwhile, the conservative institution of marriage meant redemption and salvation to questionables in the early Hollywood cinema. Anyone outright resisting it would perish, likely the victims of self-imposed studio censorship. Marriage almost saves Guino, and begins Tony's downfall.

I find the traditions of genre fascinating, and always yielding new insights in individual films. Wood made the bold call to describe Scarface as a comedy, which makes sense since many of the scenes aim for comic effects and irony of situation. Still Scarface helped solidify the gangster film tradition, which adapted to the times then saw a major revision after the release of Coppola's first two Godfather films. 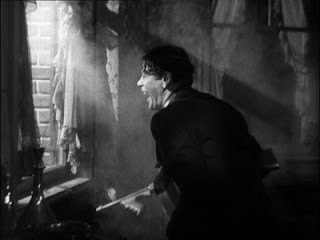 In Scarface alone, genre commentary appears briefly. When the police chief discusses the moral depravity of the Volstead-breaking gangsters in Chicago, he contrasts them to the shoot-'em-up heroes on the western plains. The latter met head-on, on the street, at high noon, to settle problems with honor. Essentially, he endorses the myth of the west, the right for eastern-borne white men to claim the land from “unofficial inhabitants.” (The idea was based on John L. O'Sullivan's concept of “manifest destiny” from 1845.) With his contrast, the chief's able to conceive the urban gangster as a rat-like menace that slithers from the gutter to kill anything in his way, even children. Subtextually, the racism against immigrant Catholics emerges.) Essentially we have inherent moralism of the early US cinema, which urged the need for Camonte to fall, even if he appears most powerful throughout. As Wood noted frequently, genre is largely based on ideology; it's fostered through popular entertainment and in the film, directly stated by the chief.

These two insights came to me in my recent viewing. Showing the film to undergrads, I'm learning about their perspective. During this past viewing a scene that never appeared comical to me before suddenly came out as such to my students. Before Guino comes together with Ceska, she hits on him at a dance hall. She goes into a jazz age tap dance that, I'm sure, was hip at the film's release. Thanks to the inherent dating of old films, my students saw it as bizarre, visual comedy. When she halts to ask Guino, “Wanna dance with me?” he firmly replies, “No,” which turned into a punchline. I let it be, allowing the students temporary pleasure, ready to pause the screening soon and discuss Tony's murder of Guino, and the downfall coming in the narrative.