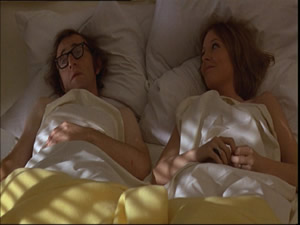 Allen and Keaton in Play It Again, Sam: “The beginning of a beautiful friendship.”

Ever committed to nostalgia, Turner Classic Movies has brought reruns of the The Dick Cavett Show to its weekly schedule. The cable station presented a new episode, featuring the even-toned but engaging Cavett interviewing Mel Brooks, to re-introduce recently acquired film-related entries from the original 1970s series. The batch will leave film buffs drooling: included are personalities such as Bette Davis, Robert Mitchum, Groucho Marx, and Katharine Hepburn, but TCM also has the behind-the-camera masters Alfred Hitchcock, Ingmar Berman, and Orson Welles chatting on Cavett’s couch. (The series is now available on DVD.) The programmers made a wise move by nabbing a rare interview with Woody Allen, who has become a notorious recluse ever since his Cavett appearance and has taken one hell of a journey professionally (and, alas, privately).

This 1971 interview captures Woody at a unique time: his hair had sprouted long, he’d been through two marriages, and he was already a veteran of analysis. He discusses his films and shares his knowledge of the classics, but is ready to inform the audience that a recent sexual assault upon his ex-wife could not have been a “moving violation.” (No worries – the joke was one of many fictional bits he used during standup routines.) As a filmmaker, he showed an expertise with farcical material in Take the Money and Run and Bananas, both of which worked off his stand-up aesthetic that mixed low comedy with intellectual musings. The program even shows Allen promoting his first collection of comedy writings, Getting Even, which consists mostly of work written for The New Yorker. Allen fans will find a special treat when he picks up his clarinet to jam with a Dixieland outfit--but even moreso when he casually muses, “I do want to make a serious movie one day.”

By 1971, Woody had been through two marriages and was already a veteran of analysis. As a filmmaker, he was beginning one hell of a journey.

A renowned film expert even then, Allen hints toward his stock in the auteur theory when he describes his upcoming project, a film adaptation of his 1969 light stage comedy, Play it Again, Sam

, as not “his work.” It would be directed by play-to-film specialist Herbert Ross from Allen’s script, though it feels a part of Allen’s canon. At the time of the interview he still had hilarious, breezy parodies of dystopia (1973’s Sleeper) and 19th-century Russia (Love and Death, 1975) ahead of him. But his script and performance in Play it Again preview how he would soon elevate his comic acumen into masterful studies of tragic romance.

Though the story is thoroughly in Allen territory, its setting is un-Woody. As Allan Felix (Woody in an early not-so-alter ego) walks the hilly city streets, modern viewers may expect him to yell into the camera, “What the hell am I doing in San Francisco?” The Play It Again production relocated there from Allen’s usual locale, New York, due to a strike of film personnel.

There Allan Felix works as a film writer who immerses himself in the romantic ideals of Humphrey Bogart. The opening scene comically juxtaposes the sublime Bogey, offering advice and those classic lines to Ingrid Bergman at Casablanca’s closing, with an entranced Felix watching in a theater. We soon find him in an apartment practically wallpapered with Bogart, an ironic environs that sets up the center of the story: Allan’s lack of luck with the ladies.

His luck has run short with his wife (Susan Anspach), who has left him for a man visualized by Allan as an Aryan biker. As the film develops with various comic bits, we realize that Woody has goals quite familiar to his work of the period: to entertain with elements from his standup routine. When Dick and Linda Christie (Tony Roberts and Diane Keaton--Sam was the first of many occasions for both to work with Allen) appear to console Allan, the latter throws one-liners up for everyone’s joy. “At night I used to lay and watch her sleep,” Allan says, referring to his ex wife; “She’d wake and catch me--she’d let out a scream.” Woody’s costars also share the fun when Keaton shows her own neurosis--“I’m experiencing a wave of insecurity!”--and Roberts, in a dated but now nostalgic string of jokes, continuously calls his office to forward the number of his current location, at times relaying three phone numbers in advance. (The series could work as a little time capsule for children born after the cell phone boom.)

Robert’s Dick is preoccupied with his work, and thus leaves his wife comfortable but abandoned. As Linda spends more time with Allan--first helping him reenter the dating world, then going out with him platonically--the connection eventually grows into romance. Linda offers support to Allan even after his wackiest of come-ons to other women: “What are you doing Saturday night?” he asks a dark-clad hipster at a gallery, who replies, “committing suicide.” Allan, right in stride: “What are you doing Friday night?”

Keaton plays naturally as a functioning neurotic next to a performer who was still making himself comfortable onscreen (though Woody’s quite at home with the wisecracks and visual gags, like when Allan suffers an avalanche of contents from a medicine cabinet). Though uneven, the performances find chemistry in that both characters capture a balanced mix of anxiety and concern about each other.

But Allan isn’t in this thing alone. While pondering his love life, he sees the object of his fanaticism walking from the shadows of his apartment to address him. Soon Allan finds himself struggling with advice from Bogey (uncannily realized by Jerry Lacy), who has Allan’s situation all figured out in light of his gruff noir code. (The film’s title even quotes one of Bogart’s refrains in Casablanca.) Onscreen, Woody shines when dealing with the intruding Bogart, who offers advice when Allan is alone and when he is trying to score. Woody’s use of fantasy foreshadows his later successes with the genre, including a movieland romance set during the depression (The Purple Rose of Cairo), a modern re-imaging of Lewis Carroll (Alice), and the delightfully bizarre pseudo-biopic of the chameleon-man, Zelig.

Apart from its fantastic elements, Woody’s script of Sam finds a deft blend of the comic and romantic. This crosspollination overshadows a forced closing tribute to Casablanca with Allan playing Rick Blaine; Allen’s myriad clever turns in films to come may even qualify it as a misfire. Though a retrospective viewing asserts that Sam is grounded in laugh-out-loud comedy--Woody includes too many dead-on wisecracks to deny the fact--the film shows the star taking a step toward his future while still playing the prankster that America had come to love.