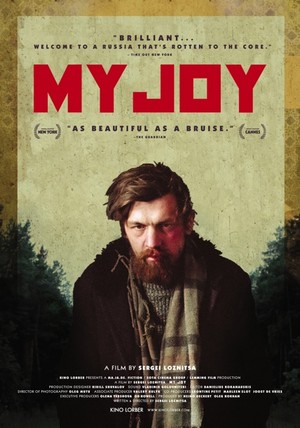 We don’t often stop to think of the ease with which life can go from boring to horrific, mundane to life-changing. Maybe when do we at least hope that what happens isn’t arbitrary, that especially in times of suffering or accident there is a meaning to be had.

My Joy consistently and nonchalantly dispels that hope. This Ukrainian film set in Russia and directed by documentary filmmaker Sergei Loznitsa offers no reason or explanation for why the boring, the tragic, the senseless and the funny happen in our daily lives: he just points the camera at a series of people wading through their day and reacting to what goes on. Some have to face being robbed, mocked by a prostitute, or hassled for no reason for an ID (and then killing the one who did the hassling); the prize of a robbery is only a truckload of flour. Always in the background is the mind-numbing landscape and corrupt bureaucracy of Russia, both today and in its Communist past.

This would be a poignant film if there was a sympathetic character, but Loznitsa doesn’t linger too long on anyone, even the few who do arouse sympathy. As random as life, My Joy has no real plot, no hero or heroine; some may also say it has no point, while others will say that its random expressionism is the point. I’ll sit with the latter.

Grim as it is, the film does possess the subtle black humor, or at least whimsical nihilism, that has been a hallmark of Eastern European art for centuries. Frequent wars and absurd totalitarian revisionism will do that. Seen as farce, some scenes are more cause for bemusement than despair. But a darkness hangs over the lives of these random characters: the soldier separated from his bride, the truck driver who, for a short period, seems the hero of the film; the sad, drunken faces of villagers who observe, ignore or deride; the lazy, corrupt post-Soviet system itself, which is explicitly indicted both in its rural and urban versions.

My Joy offers no explanations, no resolutions, and no escape route from the relentless advance of time. Things happen, then nothing happens, and whether those moments are scarring or forgettable, another one is on the way. Think of this as Heart of Darkness with no Marlow, no island at the end; there is no end. Is this a dark comedy or just senseless vignettes varying in intensity? Depends, like your next moment, on expectations.