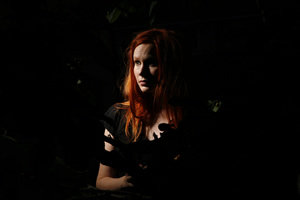 Whether performing with her "Magical Orchestra" or playing all on her own, Susanna Wallumrod's voice requires very little accompaniment. 2004 marked the release of her band's debut album in Norway, with collaborator Morten Qvenild providing sparse instrumentation, followed two years later by an album of cover songs. Susanna has most recently created Sonata Mix Dwarf Cosmos

, a solo record which blends folk songwriting (think Joni Mitchell) with the ghostly indie quality of her previous endeavors.

Perhaps the most lasting impression of Susanna's music is its unyielding tastefulness. Where one would expect a drum loop, a soaring harmony, or a bed of violins or keyboards, one is left most often with Susanna's bare voice, a few notes on a piano, and a lingering melody. The effect is pure, haunting, and entirely successful. Below, she sheds a little light on Norwegian hymns and explains why perfection is not always necessary.

Your album strikes me as very confessional and personal. The emphasis on vocal performance and acrobatics, and the importance of the melodies and songs as beings of their own, seem well balanced. Considering that you have released an album of covers, do you consider voice to be your primary consideration? Or, in the case of this solo record, was your emphasis on the songwriting?

My voice and songwriting belong very much together. The voice is my "first" instrument, the instrument I express myself best with and the instrument that is closest to me. I have found that my voice can be used both in making my own music and also in remaking other people's music into my own. I do think both are important for my musical expression.

Having experienced composing and performing as both a solo artist and as a collaborator, do you feel that the writing, recording, or performing processes come more naturally for you one way or the other?

I think I have learned a great deal from both ways of working. When I first started my collaboration with Morten/The Magical Orchestra back in 2000, I had been looking for a piano player to work with in a duo for a while. I wanted someone to work out the music with, together, and the duo is a very challenging setting. After some time working with Morten, I got the urge to work more independently, and I started to work by myself, on the piano... That was a long and sometimes difficult process. After writing [quite a bit] I started to involve other people, but I found that I should mainly stick to the way these songs were made--with me playing. The result was that I had to figure out a lot for myself, and now that seems an important turn in my life and music--also for further collaboration with others.

I seek to be true to the core of the song, of the music--so I spend some time figuring out how to do the recorded songs in a live scenario. It feels like two different things, but I hope to bring the same sincerity to my concerts, as well as recordings.

I grew up in a family where music was an essential part of our lives, so I guess I was very young when I found out the importance of music to me. I remember listening a lot to Olivia Newton-John (Grease/Physical, etc.) and Dolly Parton at the age of five or six. And later on came Whitney Houston with "I Wanna Dance With Somebody," which I loved... Plenty of pop music in my childhood.

I have read in a previous interview from a few years back that you are a perfectionist of sorts--did your experience creating this solo work make you more or less of a perfectionist?

I think I have learned that perfection can contain several different parameters and that I can choose how it may influence my work. Perfection and music are not necessarily related, I do not wish for the music to be perfect but to move the listener in some way.

One of my favorite moments on your record is on "Home Recording," the fret noises that punctuate the end of each acoustic guitar phrase in the choruses. They are an unexpected and very intimate sound on a rather polished album. I was wondering if those finger sounds were intentionally played or enhanced or if it was a happy accident?

We can call it a happy accident. We (the producer Deathprod and I) came to the conclusion that the song [worked best] when I played it just straight and simple, so we did the recording at home and we didn't leave out all the noises from my imperfect guitar playing. I am glad you like it.

That is hard to answer. Growing up in a small town in Norway has probably influenced me in some way, but exactly how is hard for me to see. I grew up in a religious family--the religious music tradition in Norway is a mix between Norwegian folk music and American folk music, so that merge is my foundation. And through the years I have experienced other worlds and other music.

I don't think it is possible to divide music into decades, music is something much more organic. I like music that goes several hundred years back in time--and I like music made in the last couple of years. I would have to say that I like very much music from the '60s and '70s, rock, jazz, and singer/songwriters...

Many things. The business part of it is always frustrating and the industry is... an industry, which I don't think belongs together with music as an art form. At the same time, people have so many different reasons for making and performing music...

You have covered handfuls of songs in your career--is there one that you feel was a particularly perfect fit for your voice?

I like every song that I have done, in different ways--it's hard to tell if any one of them is more fitted for my voice than another.

I read that your first performance was at the age of five--have you known since then that you wanted to be a musician? Did you have periods of doubt in which you considered other paths?

I have wanted to be a musician since that age, yes, but to choose that way of living is a constant struggle between belief and doubt in what I do and how to do it. To make the choice of music is to constantly choose what I want my life to consist of.

One of the things I like about your lyrics is that they are quite broad and put simply. They seem like they could apply to many things, circumstances, involving all sorts of relationships. For instance:

"Is it hard to confess to yourself?" "I've been waiting for a reason to stay, will it come today?" "Hang out here with me a little longer..."

It seems that you convey an emotion, without particulars getting in the way of the song. But I'm curious if the songs do have those particulars for you, experiences and memories of yours that you chose not to clutter the song with? Are most of your compositions about something very particular to you--a specific memory or scene--or are they about a general emotion?

I think almost every song that I've made has an origin within a state of mind or an emotion. It evolves from there through different memories and a lot of fiction. I would have to say that my fictional world [stems from] my own world, as for every human being, I think. But that is also a very abstract picture because you don't know what I have experienced and what I've fantasized about. My songs are both very particular and very general to me--and I hope others experience my music that way, too.

In America, Scandinavian music has only started to become a significant influence in the past few decades. Artists like Mum, Sigur Ros, Kent, Under Byen, and Bjork have clearly had a big impact. High indiscernible vocals, glitchy laptop noises, heavy mallets on drums accompanied by string sections.... these things could be pegged here as "Scandinavian" and also as modern. I am curious--considering that you have grown up in Norway--if you would say that these examples are representative of a modern movement in Scandinavian music, or if they are elements that have long been present, that only recently have started to have an effect on American and British music?

I would say that Norwegian music is so much younger than, for example, American music... We are a young nation and so few people. We have looked to the States and Britain for inspiration for decades, and rightfully. Those countries have been the main influence of Western music for a hundred years--and we are influenced by this music. But we are also very lucky, in Norway, to have musicians such as Terje Rypdal, Radka Toneff, and Jan Garbarek in the jazz tradition--they set an example focusing on their own voices, music, and way of expression. For me, they have had a great impact on how I make my music. I cannot speak for anyone else, but the creative spirit of the '60s and '70s in this country has made a foundation for the generations and music to come, I think.

That may represent the movement you mention as Scandinavian music--in my opinion it's quite young, but the roots go way back... and some of the roots are well-grounded in America.

I am currently reading some novels by Raymond Carver, which I like very much. And classic... I would have to say Simone de Beauvoir and her writings about the sexes. It's maybe not that "classic" and old, but still interesting. Literature stimulates my fantasy and my way to see the world, life, etc. To me, every art form has that possibility to influence, stimulate, and move.

I enjoy very much Robert Plant and Alison Krauss' album; I'm looking forward to a concert with them in May. Lately, I have listened to and enjoyed Larkin Grimm, Bonnie Prince Billy, Sufjan Stevens, and Arcade Fire.

Identity Theory's recommended listening: "For You" and "Demon Dance" by Susanna, "Love Will Tear Us Apart" by Susanna and The Magical Orchestra