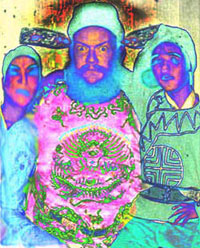 When Tom Bradley was a little boy he was given a gazetteer for Christmas. As little boys will, he looked up all the places in the world that start with the F-word. There were two, Fukien in China and Fukuoka in Japan.

Little did he suspect that he would one day be exiled to both.

Tom is a former lounge harpist. During his pre-exilic period, he played his own transcriptions of Bach and Debussy in a Salt Lake City synagogue that had been transformed into a pricey watering hole by a nephew of the Shah of Iran.

He taught British and American literature to Chinese graduate students in the years leading up to the Tiananmen Square massacre. He was politely invited to leave China after burning a batch of student essays about the democracy movement rather than surrendering them to "the leaders."

He wound up teaching conversational skills to freshman dentistry majors in the Japanese "imperial university" where they used to vivisect our bomber pilots and serve their livers raw at festive banquets. But his writing somehow sustains him.

To date, Tom has published five novels tracing the not-quite-career of a seedy member of the lumpen-intelligentsia named Sam Edwine. If he didn't think it might be offensive, Tom would call this corpus THE SAM EDWINE PENTATEUCH.

The first novel in the series, KILLING BRYCE, examines the disintegration of the Edwines, a family of gigantic Jack-Mormons. In ACTING ALONE Sam tries to get hired as ghost-writer for a recently released hostage of Islamic fundamentalists. BLACK CLASS CUR finds Sam in China in the halcyon days just before the student democracy movement gave the Party the excuse it needed to slam a lid on everything.

KARA-KUN/FLIP-KUN can be read as a portrait of contemporary Hiroshima, where Sam brings the expatriate community face-to-face with the Japanese Mafia. THE CURVED JEWELS shows the Crown Princess of Japan experiencing understandable second thoughts about being wed to the grandson of Hirohito, and fleeing the imperial palace with Sam's help. Tom's short stories have been nominated for Pushcart Prizes. One or two were translated into Japanese, or so he's been told. These stories feature such gentry as a harelip with a six-figure book advance, a Palestinian abortionist, a seven-foot-tall banjoist losing his mind in the London tube, a peyote-eating teen killer, a rent a-Frankenstein on Purple Haze, a Chinese compulsive masturbator, cannibal orgiasts in the basement of the Mormon Tabernacle, and Japanese schoolgirls conscripted to stir the vats in a poison gas factory. His no-less uplifting essays appear in Salon.com, McSweeney's, Exquisite Corpse, Poets & Writers Magazine, and lots of other places. They are often featured in that sublimest of all blogs, ARTS AND LETTERS DAILY--which looks like it's going to win this year's coveted Webby.

Showcased in ARTS AND LETTER DAILY is a strange and glorious rave-review of Tom's fifth novel (http://www.corpse.org/issue_3/secret_agents/johan.html).

This review diagnoses him as suffering from an "unwholesome Christ complex and a desire for public self-annihilation," just because he mocks the penis of Emperor Hirohito's grandson, and has publicly announced his ambition to be the Salman Rushdie of the Pacific Rim.

Speaking of Tom Bradley novels, his second one comes equipped with the following blurbs:

"I found ACTING ALONE to have an incredible energy level."

"The contemporaries of Michelangelo found it useful to employ the term 'terribilita' to characterize some of the expressions of his genius, and I will quote it here to sum up the shocking impact of this novel as a whole. I read it in a state of fascination, admiration, awe, anxiety, and outrage."

--R.V. Cassill, editor of The Norton Anthology of

Various of Tom Bradley's five published novels have been nominated for The Editor's Book Award and The New York University Bobst Prize, and one was a finalist in The AWP Award Series in the Novel. Excerpts and reviews, links to Tom's online publications (Exquisite Corpse, Salon.com, McSweeneys, etc.), plus recorded readings, are posted at http://tombradley.org A few of Tom's links: http://www.tombradley.org http://www.creativenonfiction.org/... http://gadfly.org/8-20-01/FTR-madeinchina.HTML http://www.themightyorgan.com/travel_hiroshima.html http://www.salon.com/books/it/1999/11/29/china/index.html http://www.corpse.org/issue_7/ficciones/bradley.htm