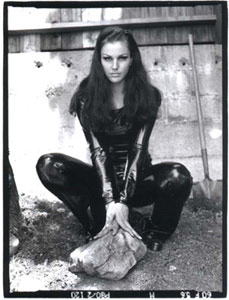 Susannah Breslin was born and raised in Berkeley, California, which, of course, explains it all. A faculty-brat of the highest order, Breslin grew up riding horses, reading of Tove Jansson's Moomins, and avoiding both hippies and feminists. After dropping out of high-school at the last minute, she ended up later earning a B.A. in Literature at U.C. Berkeley. Several of her years were subsequently spent toiling away in the constipated bowels of the University of Illinois at Chicago's Program for Writers, bonding with ex-communist-turned-premiere-novelist Lily James (http://www.lilylit.com).

Most recently, she made the cover of The SF Examiner (http://www.examiner.com/news/default.jsp?story=n.femporn.0311w), is shooting arty behind-the-scenes photos in the adult industry, and has made a bukkake comix for the fine pages of the forthcoming Dirty Stories III from super-cool Fantagraphics. Daily, Susannah drinks coffee at her home in Los Feliz, chats with her cat Kurtis, and brings terror into the life of her stoic boyfriend, robot artist Christian Ristow (http://www.ChristianRistow.com). She is working away on a short story collection, If Only These Hands Could Talk, as well as a novel, Reverse Cowgirl, and various other projects involving photography, comix, and vigorously dismembered small dolls.

Susannah Breslin is a freelance journalist and a Forbes blogger. She has written for Details, Newsweek, Harper's Bazaar, Salon, Slate, The Daily Beast, Variety, The San Francisco Chronicle, Esquire.com, and The LA Weekly, and She's appeared on "Politically Incorrect," CNN, and Fox News. She is 6'1".