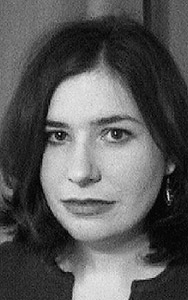 Born in 1973, Anne Boyer grew up in Salina, Kansas, just south
of the world's largest ball of twine. Formative years spent in the
middle of nowhere meant far too many reruns of the Jeffersons, lukewarm
orange pop at harvest time, and late nights at The Outhouse, the
legendary punk venue plopped right down in a sea of wheat.

Ms. Boyer educated herself at Kansas State University and Wichita
State University, graduating with a BA in English Literature in
1996 and an MFA with distinction in Creative Writing in 1997. She
watched Johnny and June Carter Cash perform in the parking lot of
the Newton, Kansas, factory outlet mall, and was sweated on by Kurt
Cobain before Nirvana showed up on MTV. Though she has all the Velvet
Underground records on vinyl, including a bootleg she picked up
in Lausanne, she has never seen Lou Reed live. After running as
far away from Kansas as Kansas City, Missouri, she now lives in
the middle of Iowa with a husband (discovered at a Jesus Lizard
show) and a four year old daughter (who loves "Pet Sounds").

According to Susan Sontag, "a writer is first of all a reader
-- a reader gone beserk." According to one of Ms. Boyer's now
departed grandmothers, reading causes brain sickness, and Ms. Boyer
will surely get ill if she doesn't get her nose out of all those
books. Though Ms. Boyer hasn't yet been thoroughly stricken down
by brain maladies, she does read compulsively and type obsessively.
Sometimes this typing results in poems, sometimes essays. Ms. Boyer's
other obsessions include scouring rummage sales for vintage textiles
and paper goods, getting lost in the verbal labyrinths of high modernism,
listening to The American People, and learning how to play euchre.

Ms. Boyer teaches creative writing and organizes community writing
events and workshops. When she feels ambitious she publishes her
work in venues both fancy and humble, but she finds composing thorough
lists of her writing credits exhausting and pointless. She has nominated
herself for various awards and honors of her own devising, but always
comes in second place. If Ms. Boyer were an award winner, she would
use her full authority to convince you to read Barnes' Nightwood,
Toomer's Cane, Melville's Confidence Man, and of course, the dictionary.

In celebration of her shadow career as a radical hausfrau, Ms.
Boyer is also the founding editor of the print literary journal
Crock: A Journal of Domestic Bliss. Send an email to crocksubmissions@yahoo.com
for guidelines and themes.

AB on IDT: "The
Discovered Physician"

Anne Boyer grew up in the middle of Kansas, just south of the world's largest ball of twine. Her work has appeared such places as New Letters, 13th Moon, Freefall, and Twist.