Beneath all science fiction lies a dilemma, one solved by the best storytellers: whether the speculative devices are more interesting than the characters created to experience them. In the medium of film, sometimes action and atmosphere can compensate for cutouts populating the narrative. The works that balance humanity with sharp ingenuity are successful and, quite often, classics. 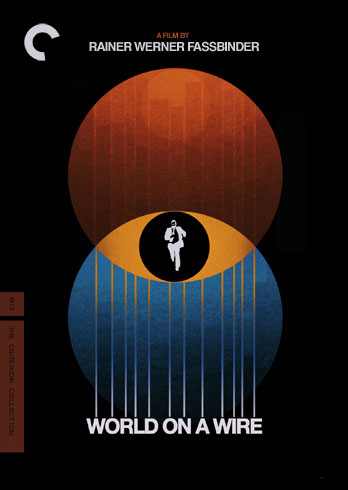 The “device” in World on a Wire (1973, adapted for West German television from the novel Simulacron-3 by Daniel F. Galouye) is a computer program Simulacron that creates personality identities for faux-beings who believe they are human. The conceit returns to the common themes of “Can machines be human?” and reality as a fabrication of science. By learning that the program is designed to measure consumer practices of the future, we find a nice critique of capitalism in tandem. The film concerns the scientists in charge of the program, one of whom, Stiller (Klaus Löwitsch) realizes that it has come too close to him. When Vollmer (Adrian Hoven), the original programmer of Simulacron, and the head of security, both disappear, the film seems like a political thriller, though the latter disappears in thin air, leaving us to question reality beyond putative intrigue.

Adapted and directed by West German great Rainer Werner Fassbinder, World builds Stiller enough to match the device fueling his story. And yet the film stands as unique through its visual style. Having also worked in the theater (to where he'd return during a short career of astounding output on film), Fassbinder was unique in his use of defamiliarization when directing actors. His control over their physical and verbal performances is evident throughout his work, and in World it brings about an unsettling feel. The design seems urban chic for the time, and the action remains in realistic locales, though human interaction remains a far cry. While science is used to benefit humanity, we learn that the former has virtually disintegrated the latter.

If dystopic science fiction seems an odd choice for Fassbinder, we recall that this filmmaker, fond of classic Hollywood (like the French New Wave directors who debuted before him), worked in a variety of genres: the gangster film (Love is Colder Than Death), farce (Satan's Brew), filmmaking satire (Beware of a Holy Whore), and the western (Whity). As a sheer creative force, Fassbinder could take on any style and make it his own.