I wonder about the adjectives that are used to describe
reading: light reading, summer reading, required reading, beach
reading. I think the venerable Norman Mailer had it right when he
was asked about his summer reading list. "I read all year around,"
he growled. Because I spend a fair amount of time in front of a
computer monitor and there being no water cooler handy and my dog
frequently ignoring my inept attempts at conversation ("Hey
Rosie! How’s it going, good girl?") I find myself exploring
that brave new world, the blogosphere. I know that I am reading.
But I am not sure what kind of reading it is…

Variously referred to as a media bath or informational
shit stream, modern life presents us with the high-quality problem
of an over abundance of information. This may be viewed as an understatement
considering the strained and exasperated exclamations one hears
from people when they discuss the seemingly limitless Internet and
even cable TV. I have already resigned myself to never being able
to read all the books I would like to read (or seeing all of this
planet that I would like to visit), though I still have great expectations.
Thus, I have found reining in my appetites a useful way of making
my way in the world. Magazines have always been a source of enjoyment,
but sadly there has been an editorial decline in consumer publications
(emphasis on ‘consumer’) that have become shopping and
eating publications and thus they have, for the most part, been
rendered useless to me. Although it’s not as if I am exactly
sitting with time on my hands, a well-honed procrastinational talent
has me dipping into the rushing info-stream.

"Blog," that inelegant (actually, downright
ugly and off-putting) word for web log, and "blogging,"
the equally abrasive verb for the activity of journalizing on the
web, are rapidly creeping into mainstream awareness. Sure evidence
of this is stories appearing in the daily newspapers. Last spring
Boston Globe gadfly Alex
Beam focused his considerable wit on the rising tide
of weblogs and recently Globe media columnist Marl Jurkowitz
reported (December 26,2002) that the Trent Lott contretemps has
done for weblogs what the Gulf War had done for cable TV:

In the New York Post, John Podhoretz wrote
a column lauding the role of the ''blogosphere'' in the drama, noting
that ''there's nothing more exciting than watching a new medium
mature before your eyes.''

''Thank God for the Internet,'' echoed syndicated
columnist Arianna Huffington, congratulating bloggers for being
''truly free of the dependence on access, and the need to play nice
with the powers that be.'' …Whatever the bloggers' impact
in the Lott case, the episode did serve to turn the spotlight on
a hybrid form of journalism /commentary / conversation that is exploding
onto the media landscape. According to an online Wired News story,
there are now almost a million registered users of a popular blogger
software, a jump of more than 50 percent from the previous year.

Now the burgeoning blogosphere, a subset of the
Internet, which as with all new things, carries with its own baggage
of the shock of the new, also presents users with quantitative burdens
which end up with--for some interim period--the ascendancy of a
new set of arbiters and blogocrats. This cyberian Oklahoma already
suffers some infantile afflictions by way of its frenzied growth,
without the additional malady of a choir of humorless critics. On
the other hand, George Ouzounian, a twenty-four-year-old University
of Utah mathematics student who created The
Best Page in the Universe has been on the web since
1997 and is perfectly direct (and funny) in his appraisal of the
current state of affairs:

Bloggers are ruining the internet. What are "bloggers"?
They're fat--usually gothic--losers who keep web logs instead
of hanging out with friends because they wet the bed and don't
have any. A web log is a type of online diary where people who
aren't important can pretend to be by writing to an imaginary
audience. Girls are notorious for keeping these. On a typical
site, you'll find a 17 year old girl with hundreds of webcam pictures
of herself pasted everywhere, an Amazon wish list so they can
exploit wankers that visit their site, and about 2 gigs worth
of text documenting every time they took a shit, had an epiphany
about taking a shit or ate something (all written in extremely
stylish, yet IMPOSSIBLE TO READ micro-font).

Here is an actual quote from a web log I happened
across in my referral logs today: "I took the best nap today..
so so great. And I ate a sandwich, but it wasn’t that great,
and it kinda made me sick... but it's better than nothing."


So the question is: does anybody in the universe
care about Ms. X who had "the best nap today" or that
she ate a mediocre sandwich? I don't, which is why I promptly
uninstalled my browser and punched some guy sitting next to me.
The page goes on and on about how she's bored, tired, depressed,
lonely, hungry, frustrated, etc, etc, etc. I can't remember the
last time I wanted somebody's fingers to break so badly.

Of course, this is not the blogosphere that newspaper
media critics are talking about. Nope. They are referring to professional
scolds like Andrew Sullivan and a host of well-credentialed professionals
that have found the ultimate freedom (for writers, that’s
a life without editors) of unmediated access and an unbridled opportunity
to paint the world as they see it. There is a tempting digression
here but I may take it up later in my memoir in progress, An
Ace That Beats a Full House.

In my early days of Internet use I remember seeing
the Web as the last refuge of scoundrels and the fountainhead of
commercial world run amok:

Tempting huh? Not only is it easy to see why many
people seem to have an edge in their voices when talking about Internet
matters and why their tone of voice when saying ‘dot com”
is one previously reserved for words like “Jews” or
“gays,” there is the additional matter of wondering
who actually responds to this sludge. I assume that the spam keeps
going out because someone is making money. Of course, it could be
people touting anti spam software…nah.

The blogosphere is, of course, the content realm
of the web and as such represents all manner of life forms, points
of view, commercial interests and nervous systems. The site names,
that are as wide-ranging and unorthodox as pop music bands, are
a tip off to that, uh, diversity. And naturally, the price that
is paid for the ease of access is that Net brings forth earmarks
of towers of babble. Here’s young George again, from The
Best Page in the Universe:

I'm keeping my web site shitty as a protest against
all the slick-looking, content-less web sites out there. Nobody
cares about your stupid rotating icons and fading links. Some
webmasters have spent years tweaking their layout and designing
their site, and very few get any traffic. This site, as shitty
as it looks, gets over 1 million hits per month. I use large fonts
also as a protest against all the stylish garbage you see out
there. When I go to a web site, I WANT TO READ THE CONTENT. Trust
me, that micro-font everyone uses isn't nearly as original as
they think. I've chosen a black background for most of my text
because it's easier on the eyes than staring at a white screen.
Think about it: your monitor is not a piece of paper, no matter
how hard you try to make it one. Staring at a white background
while you read is like staring at a light bulb (don't believe
me? Try turning off the lights next time you use a word processor).
Would you stare at a light bulb for hours at a time? Not if you
want to keep your vision.

Currently, I am, with some regularity, book-marking
a few sites. This is hardly a signal of restraint on my part as
nearly every website and blog has endless hyper-textual references
(links) that can send one spinning further and further out into
a dazzling and dizzying universe of discourses:

Blog
of a Book Slut. Booklovers and readers gathering and
gleaning all matters of information about the literary world.

2 Blowhards.
A true web log. Two brainy people correspond with each other and
seemingly induce other brainy folk to chime in. As close to a literary
dinner party as I have found on the web sans libations and other
hors d oeuvres. Not that I have been looking.

Good
Report. Alex Good lives in Canada. Many people know
where that is and may even know that Canada is the home of Alice
Munro, Michael Ondaatje and Yann Martel, among others. Alex reports
on Canadian literary goings on. Go Alex!

Everyone
Who's Anyone in Adult Trade Publishing Gerard
Jones has been trying to get his two novels published for thirty
years. In the course of that noble pursuit he has assembled this
invaluable guide to the pub biz. He has annotated with his own correspondence
with various pub big shots. Hilarious. Let me say that again. Hilarious.
And sobering, if you are a writer in waiting.

Ludwig
Wittgenstein Online
My undergraduate life as a philosophy major still haunts me especially
because of my exposure to this profoundly enigmatic personality
and arrestingly original thinker and polymath.

MobyLives.
Dennis Johnson also covers the literary waterfront. His own commentary
and columns are quite funny and well-targeted. Watch out though,
he seems to have a real hard on for Jonathan Franzen.

The
Best Page in the Universe George is funny, original,
thoughtful and is a great argument for even the best of us needing
an editor.

By the way, this (a reader’s progress) is
not a weblog... 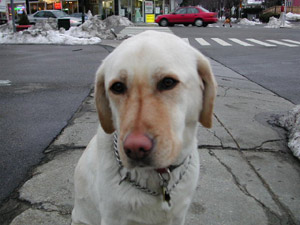