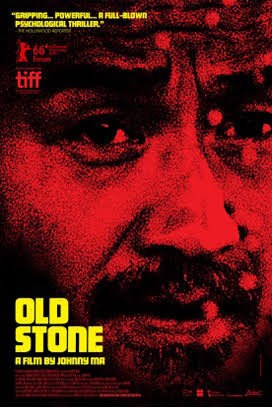 Blood red title cards flare up between shots of a lush green forest swaying under the weight of a rolling storm. Cut to a gruff older man glowering from his steering wheel, taking pulls from a bottle of liquor, and driving off to tail a bandaged, scooter-bound motorist through the streets of urban China. The man's car radio provides the backing track: a vague news report on a driver who struck a pedestrian, then attempted to cover up by running over the victim a second time. Cut again, and we are thrust into the scene of the driver’s own traffic mishap three months prior, as a crowd forms around a bloodied man splayed out next to a scooter.

From the opening minutes of Old Stone (2016), the feature debut from Chinese-Canadian writer/director Johnny Ma, the viewer is in for a film that undulates from atmospheric lyricism to ham-fisted social commentary. Central character Lao Shi (Gang Chen) suffers through a series of humiliations at the hands of unblinking and uncaring bureaucracy, which would be harrowing if not for the fact that this suffering is carried out by some predictable set pieces and two-dimensional supporting characters. The film is not quite funny enough for well-executed black comedy, not quite resonant enough for provocative social realism, and not quite painful enough for emotionally fraught drama. Despite this overall flatness, it still manages to wring a tense moment or two from its plot. Furthermore, Ma shows a promising penchant for neatly layered compositions that will hopefully serve him well in films to come.

Old Stone follows the titular-by-translation cab driver Shi as he struggles through his decision to pay for the hospital bills of Li Jiang (Zebin Zhang), the now comatose man that he struck while on the job. Shi’s world is dangerously apathetic: he drives his own victim to the hospital for fear that the notoriously slow ambulances won’t make it in time; he is consistently rushed through the process of obtaining medical records and bills and is made to feel like a nuisance for asking questions; he enters a madhouse of bribery and disorganization upon trying to connect with the police managing his case; at a cafe, he watches as a group of younger revelers harasses a homeless man. Chen’s performance serves as a nice anchor for this procedural nightmare, as he winces and pleads at each impassive turn.

It is when Shi leaves his battles with the legal black hole and brings his complications home that the film begins to lose some of its power. In trying to undercut Shi’s nominally noble intentions with domestic conflict and consequences, the film inadvertently creates an uninspired henpecking wife caricature in Mao Mao (Nai An). This outcome is a shame, given that there is some intrigue to the idea that Shi’s selflessness is an inconvenience and cause for ridicule from his friends and family. But it is hard to see past the fact that one of the more explosive and dramatic interactions between husband and wife involves Mao Mao beating Shi with her umbrella and purse, like some histrionic player in a Bugs Bunny cartoon.

The structure of the film, relaying between Shi’s harried attempts at resolving his predicament and his ultimate decision to talk to the since-recovered victim, certainly has the makings of a winding thriller. However, by the time we catch up to the B plot and witness a mud-slicked and bloody reckoning with this cruel and senseless world, the stakes have been lowered to the extent that the film’s climax doesn’t really linger or require much reflection. As a result, the attempt at a timely, finger-pointing polemic (according to somewhat specious media reports circulating a few years ago, the bureaucratic nightmare stemming from traffic accidents is notoriously common in China and often gives way to violence) instead takes on the cheesy trappings of an extended public service announcement.

For all the faults of his screenplay, Johnny Ma has a strong hand for visual storytelling. Environmental vignettes of everyday life in the city create an immersive sense of place. They also serve as thematic highlights at times, like when a religious ceremony that involves burning money occurs in the foreground as Shi ambles by after the latest bout with his wife over their finances. Richly layered long shots are used often and accentuate Shi’s isolation as he tries to navigate a world that just doesn’t seem to care much if he’s doing the right thing. These shots lend an air of voyeuristic paranoia to the proceedings, as the camera follows its subject from a faraway, elevated distance. This framing makes sense for a world where one unfortunate interaction with a fellow citizen could be catastrophic and self-preservation requires a bit of keeping an eye on one’s neighbor.

Compound this paranoid tale of a man whose city is out to get him with DP Ming Kai Leung’s hazy neons, and it’s easy to see why the studio bills the film in part as a noir. If only the film held back a bit on the melodrama, it may have felt more like a mystery worth solving. If Ma can find a narrative voice that suits the strength of his vision in films to come, he’ll certainly be someone to follow.