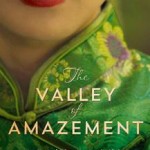 The Valley of Amazement by Amy Tan: "Inspired by what she has conjectured about her own grandmother's life, Tan (The Joy Luck Club) has centered a decades-long family saga on the complex and closed world of Shanghai's 'flower houses,' where courtesans entertain gentlemen customers." (USA Today)

The All-Girl Filling Station's Last Reunion by Fannie Flagg: "Structured much like Fried Green Tomatoes at the Whistle Stop Cafe, Flagg's latest novel alternates between the pedestrian life of Sookie Poole, a timid middle-aged southern woman and that of her brash, adventurous ancestry, a quartet of polish sisters who ran a filling station and flew planes during WWII." (Publishers Weekly)

Red Sky in Morning by Paul Lynch: "Dublin journalist Paul Lynch's first novel, Red Sky in Morning...is set in 19th century Ireland. The book tells the story and aftermath of a murder committed by a rage-filled farmer against the landlord who evicts him." (NPR)

The Isle of Youth by Laura van den Berg: Read her interview with Elliott Holt at Fiction Writers Review.